This Ribu is the highest peak of the vast Latimojong mountains in the northern part of South Sulawesi and also the highest mountain in all of Sulawesi. It is almost as much of an adventure reaching the start of the trail as it is actually climbing to the top! For its great height, it is relatively unknown and is easily one of the least-climbed large island highpoints of Indonesia. It takes a long time to reach the start of the trail – a full day driving from South Sulawesi’s capital Makassar to the village of Gurra (via Pare Pare which is a good place to stop for lunch). Look out for the eccentric and amusing motor-becaks on the outskirts of Makassar!

The village at the trailhead is Karangan (at approx. 1,415m) and the muddy track to the village from Gurra is very rough, potentially dangerous and occasionally unusable. It is best if you arrange beforehand to be taken up to Karangan in jeeps/4WDs from Gurra – outdoor trekking companies in Makassar are your best bet to sort it out for you otherwise local ojeks should be available for smaller groups. This part of the journey alone will take nearly 2 hours in good road conditions, but it is certainly memorable!

It will probably be dark by the time you reach the friendly hill village but if you take porters from there you can stay overnight there and get well-fed. On the trail itself you are unlikely to encounter many fellow hikers due to the remote nature of the mountain. There are one or two steep and challenging sections (especially between Pos 2 and 3) but the flora and fauna should be enough to keep you motivated. The forested areas are covered in beautiful mosses – probably very rare species indeed. In clear conditions there are good views to West Sulawesi and the coast.

There are plenty of campsite areas (especially at Pos 7 at 3,200m) and a small lake (3,260m) just below the summit. It is fairly cold at night up there – remember to take extra layers of clothing and waterproofs as it usually rains by late afternoon. Sunrise is the best time to admire the views from the summit pillar – the views over the sea to Southeast Sulawesi are particularly fine. Note that there is some debate over the exact height of the mountain. Estimates range from 3,440m to 3,478m and the lower figure appears accurate based on GPS data and Rantemario is definitely the highest peak in the range (despite talk of nearby top Rante Kambola being higher).

Head back down the same way to Karangan for a night and then back to Makassar the following day. 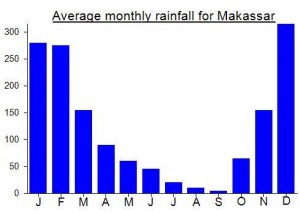