Weh island, also known simply as Sabang (the main town), is a small volcanic island to the northwest of Sumatra. It is a wildlife protection area and is attracting more and more visitors – especially foreigners who come for the snorkelling and incredibly relaxed atmosphere. On the edge of the Andaman Sea it is the beginning or end of Indonesia, and is famous for its Kilometer Nol monument (Kilometre Zero) and is immortalised in the nationalist song “From Sabang to Merauke”. A hike to the highest point remains a tough proposition and is rarely done, but perhaps this will change in time.

Before describing the mountain itself, it is worth looking briefly at the issues that currently deter many tourists from visiting this region – issues that are important to consider when making holiday decisions ethically. Weh is in Aceh province, and this means the legal system is based on Sharia Law. Recently, all female Muslim flight attendants were pressured by local authorities to wear the hijab/jilbab if landing in Banda Aceh. Air Asia’s response was to have only male cabin crew for their flights into the city. It remains a grey area as to whether or not the laws in Banda Aceh apply to foreign tourists visiting for a few days but it is sensible to err on the side of caution here. Ultimately most people here are in favour of Sharia Law, yet the authorities are aware that just one or two international news articles about extending this to tourists from overseas would be highly damaging to a major part of their economy.

Despite the province of Aceh imposing Sharia Law on all of its inhabitants (including non-Muslims), Pulau Weh is a little different to mainland Aceh, relying incredibly heavily on tourism and therefore willing to allow non-Muslim tourists a bit of flexibility when it comes to adhering to the strict rules of the mainland, especially if it is done discreetly. For example, based on informal local agreements, it is possible for non-Muslim tourists to buy alcoholic drinks in one or two places as long as there is no public drunkenness and the drinking is done in private (similar to the situation in Brunei).

That said, there was a very unpleasant incident in Sabang reported in 2015 about a local mob causing trouble when a mixture of local and foreign tourists were celebrating New Year. Nothing major has been reported since but even on Weh the local views are very conservative and given the very different outlooks on life being in such close proximity it probably wouldn’t take a lot for more unpleasantness of this sort to occur. It is clear that if this situation changes for the worse in the future then many people will lose their livelihoods and it is, of course, all about money when it comes to tolerating those with differing views. At present, the balance seems about right, as more tourism would likely lead to a higher chance of problems, not to mention detract from what is a very laidback, quiet atmosphere.

The island has many densely-forested hills, with the main two highest ranges running roughly north-south across the middle part of the island. The ridge to the east has a highpoint of 583/584m, but the main attraction of this range is ‘Jaboi volcano’ or even simply known as ‘Gunung Merapi’ (180m). It is a large active crater with numerous sulphur holes just 200 metres from the main road to the east of the range. It is free to enter and is a wonderful place to take photographs. You can even see the coastline from the top of the crater area at the edge of the burnt trees.

The other high range of hills is a few kilometres further west and includes the excellently-named Gunung Sarong Kris/Keris or “Dagger-Sheath Mountain” (at 573m the third-highest of Weh’s peaks) and Cot Kulam (“Pool Hill”) the highest of all at somewhere around 630m. This is rarely-visited terrain with dense, often pathless forest, and finding a local guide who knows the area is not that easy either (at the time of writing). It does not appear to be volcanically active and offers very little in the way of views to the coast.

The best starting point is probably the village of Batee Shok (about 88m above sea level) to the east of the range. Locals will probably try to dissuade you from hiking up there, or say that no guides are available, and tell tales of buried treasure and a Dutch or Japanese fortress at the top of the mountain which requires a key the size of a man’s forearm to open the entrance door! If you persist, you should get lucky and find a local or two who can do their best to help you to the summit of Cot Kulam. Bear in mind, however, that nobody here knows the name Cot Kulam (despite it being on all the maps) and a mention of Gunung Sarong Kris might be more useful. The way to Cot Kulam from this side goes via Gunung Sarong Kris anyway.

From the mosque and warung at Batee Shok, take a side road running up towards the lower slopes of the range. After a few hundred metres is a small entrance on the left of the road, with a path that leads up the open hillside and zigzags up onto a minor ridge (200m). There are some nice views here over the the Jaboi volcano range to the east. Enjoy the views here as there are very few higher up!

Head straight over the ridge and, depending on your guide, either take a left through overgrown scrub to the remains of a building with planks of wood and a small pool of water and then down a little way to a valley with a large wooden shelter near a stream (approximately 238m) or simply straight on to the wooden shelter and stream (easier). This is the last reliable spot for water.

From here the trail disintergrates into pathless forest. You may see one or two recent cuts made by hunters ascending the hill, or one or two plastic markers tied to trees by the hiking group from the mainland who spent 3 days exploring these peaks in August 2017. It all depends on how recently someone else has been up here, and given how little-known Cot Kulam is at present, it is likely that any path will have long since disappeared – reclaimed once again by Mother Nature!

It is not too tough to reach the summit of Gunung Sarong Kris (573m) and for most fit hikers 2 hours up should be sufficient from the village. There are one or two glimpses of the ocean in the distance but for the most part this is steep, spiny, wild forest. Sarong Kris summit is covered in dense vegetation and there appears to be no markers at all here. Look out for wild pigs here.

At this point, the trek becomes very frustrating indeed. It is still about 800 metres in a straight line to the neighbouring summit of Cot Kulam, but the terrain is very confusing. Not only is there no clear trail, the ridge between the two is not really a ridge at all but rather a wide shoulder with lots of minor dips and bumps making navigating rather difficult indeed. If you are not carefuly, it would be very easy to find yourself starting to go down one of the wrong sides of the mountain.

Given how the terrain was in 2018, you may only cover 500 metres per hour, as your guides cut a trail from one peak to the other and try not to get lost in the process! It is recommended that you allow 2 hours to get from Sarong Kris to Cot Kulam (so 4 hours total from the village) assuming nobody has climbed it recently, and then 3 hours back down. GPS, machetes, compass and preferably a pre-loaded Google Maps terrain map are very useful here, despite the low height.

Based on photos from hikers who reached Cot Kulam summit in 2017, there are no views at all. Neither is there a Dutch or Japanese fortress with a huge door or a key the size of a man’s forearm, or indeed any gold or other buried treasure. However, there does appear to be the remains of a small stone or cement structure, which is most likely to be the remaining base of a triangulation pillar used for accurate map-making in the Dutch colonial era.

The hikers from mainland Aceh who reached the summit in August 2017 suggest that Cot Kulam is 617m high. Old US Army maps put the figure at around 615m. Google Earth suggests at least 630m, and only rarely overestimates.

An alternative approach to Cot Kulam would be from the coast road west of the range near Keuneukai. However, this area is less populated than Batee Shok and there is no information on a trail existing. If there was, however, it would be a much more straigtforward ascent to the summit of Pulau Weh than the current route which passes by other tops en-route. If the local authorities are really keen on encouraging tourism, they might consider making a clear path traversing to range from Batee Shok, up to Cot Kulam via Gunung Sarong Kris, and down to the coast road near Keuneukai. I am sure it would be popular if it was well-publicised and, most important of all, maintained and kept clear and easy to follow!

Note that another island off the northern tip of Sumatra has a peak around 700m in elevation. Just as Weh is the northernmost significant island in Indonesia, Pulau Breueh is the westernmost. Breueh is much less populated than Weh, and therefore an ascent to its highest point (Goh Cumoh – 685m according to some sources but possibly higher) is likely to be at least as tough as an ascent to Cot Kulam. Do leave a comment if you manage either. 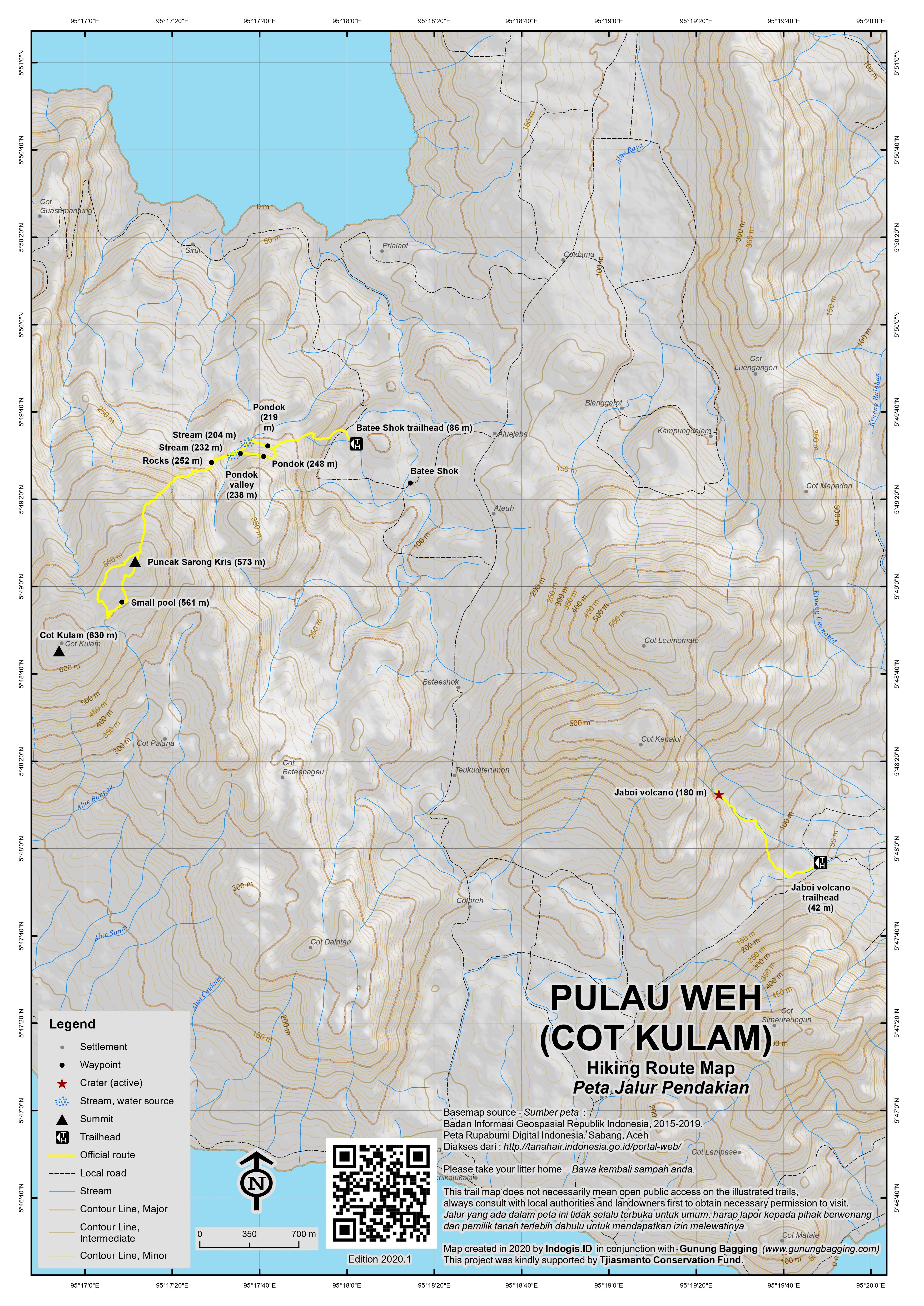