According to a botanist who hiked Pompangeo in 2013, it is definitely baggable and is even a rather ‘dull’ hike, relatively speaking. The road up into the mountains from the coast is full of pot holes, so walking in or using a motorbike is recommended. It is only 4km or so from the end of the road to the peak (in a straight line).

We hope to visit Pompangeo in the next few years. If visiting, do be sure to check the security situation first. 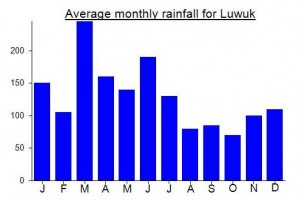