Mount Ophir – also known as Gunung Ledang – is the highest peak in Johor and the only Ribu on the Malay Peninsula south of Kuala Lumpur. It is rather popular with Singaporean hikers who visit over the weekend or even do a very long day-trip from Singapore. It is located in the Gunung Ledang National Park which is near the town of Tangkak and less than one hour from Melaka (Malacca).

The mountain has been known as Mount Ophir since at least 1800 or so by British cartographers and it is not the only mountain in this region to have that name. In West Sumatra is Gunung Talakmau (sometimes spelt without the ‘k’ as Talamau), also previously known as Gunung Ophir. The word ‘Ophir’ comes from numerous ancient religious texts and refers to a mysterious, wealthy region that was supposedly rich in gold. Chinese traders actually called the mountain ‘Kim Sua’meaning ‘golden mountain’ and even today local Chinese Malaysians regard the peak as being a place of treasure.

The other name for the mountain, Gunung Ledang, is much more popular at present and supposedly originates from Old Javanese for ‘lofty mountain’. At 1,276m, it is not especially lofty when compared with peaks in Sumatra or Java, but it is very prominent and distinct from other ranges making it a genuine natural icon of Malaysia.

There are two main trailheads and each is quite different. The Lagenda or Sagil trail starts from the south near Tangkak at the Gunung Ledang National Park HQ. It takes fit hikers around 8 hours up and down. Most hikers complete this in a single day, but there is an optional camping area around halfway up (Kolam Gajah, Check Point 4, 534m). The Asahan trail which starts on the Malacca side (south-west) is less well-frequented. When hiked from this side, it is quite common to camp at the camp area (Padang Batu, Check Point 6, 823m) as both sunset and sunrise can be enjoyed.

Alfred Russel Wallace visited the mountain, using the Asahan (Malacca) side for the approach and hiking via Padang Batu, which he described thus: “…a steep slope of even rock, extending along the mountain side farther than we could see. Parts of it were quite bare, but where it was cracked and fissured there grew a most luxuriant vegetation, among which the pitcher plants were the most remarkable”. He also spotted rhinocerous tracks and ultimately enjoyed his time on the mountain: “…I shall ever look back with pleasure to my trip as being my first introduction to mountain scenery in the Eastern tropics“.

The mountain has been very, very popular in recent years with Singaporeans who visit over the weekend as it is the only significant peak for a very long distance. Most hikers who use the common Sagil or Lagenda trail complete this hike taking around 8 hours up and down (not including rest time at the summit).

Unfortunately, the mountain is one of Malaysia’s most expensive, despite its modest elevation. Taking a guide is compulsory, and the current (2019) price of RM152 (Malaysian) and RM218 (foreigner) for a day-hike is high enough, before you see that you have to have a minimum of 4 hikers in your group! This clearly discriminates against solo travellers or small groups, but – as a solo hiker, for example – you could probably arrange to pay quadruple which would be an astonishing RM608 (Malaysian) or RM872 (foreigner) which is a ludicrous $214 (USD) at the time of writing.

Like some other peaks in Johor, this mountain sadly suffers from being close to corporate Singapore and it means not only that non-rich foreigners will struggle to afford the costs, but local Malaysian hikers will also think twice about whether to hike here or elsewhere. It is hoped that the authorities will see sense and change this pricing system in order to quite rightly allow access to the natural environment for those on a variety of incomes rather than just the wealthy.

The higher prices have mean less visitors in 2019, and on the Sunday that Gunung Bagging climbed, myself and the guide were the only people up there. However, do note that guides here tend to be excellent (notable exception is confirmed thief Azizi who regularly worked here until July 2019 when he took the guide fee from me in advance during preparation for trips to other Johor mountains and then never showed up or responded!) and you also receive a meal pouch to eat at the top (automatic cooking without the need for a stove). Unfortunately there appears to be no vegetarian option at present.

The Lagenda route starts with a cement staircase (‘tangga mahligai’) of over 700 steps to Bukit Semput  (260m, Check Point 1) followed soon after by Hentian Meranti (345m, Check Point 2). There are lots of tongkat ali trees in this area, a herb known local for enhancing male performance. You may not see hornbills here, but listen out for their flapping wings above you. After about 1 hour total you should have reached a junction (450m) where you can turn right to the camping area at Kolam Gajah or continue a little way up the main trail to Batu Orkid (520m, Check Point 3) and then Simpang Satu Dua (670m) which is where the trail via the camping area rejoins the main trail.

Beyond Simpang Satu Dua is another, more important junction called Simpang Pedita (730m) which you should have reached after a total of around 2 hours. From this point, you do not retrace your steps but rather make an anticlockwise circuit by staying right. On the descent you will meet this point again by return along the path you can see which leads down to the left.

After dropping down a little way, the next Check Point (number 5) is at Sungai Segitiga (660m, ‘triangle river’) where you cross a minor stream and then a slightly larger one. This is the last water point on the ascent. Look out for wildlife in this area including the occasionally seen Asian forest tortoise (Manouria emys).

Next comes the steepest section of the hike known by locals as KFC (‘killing fitness center’, 770m) which involves a few ladders and small roped section. After KFC is Gua Kambing (900m, Check Point 6) an area where despite the name meaning ‘goats’ cave’ you are likely to see evidence of wild pigs (‘babi hutan’). Beyond here are the most technically challenging parts of this trail with very steep rock faces with ropes across them that you need to negotiate. The second, Batu Hampar (975m) is the toughest and steepest. This area is also the best place so far for views, although you might consider it to be best to wait until you have got to the end of the roped sections before looking back down!

Beyond Batu Hampar, the vegetation grows lower in an area of mossy forest known as ‘taman bonsai’ and the views are pleasant over the forests below. Soon, Bukit Botak (‘bald hill’, 1,105m, Check Point 7) is reached and then you only have 18 or so more ladders to climb before you are at the summit itself! The summit (sometimes called Check Point 8) is the top of a large boulder which there is a final, sturdy metal ladder attached to. Views are extensive, but as most people reach this point by late morning or lunchtime it is often quite hazy.

Wallace wrote of the summit: “The top is a small rocky platform covered with rhododendrons and other shrubs. The afternoon was clear, and the view fine in its way–ranges of hill and valley everywhere covered with interminable forest, with glistening rivers winding among them. In a distant view a forest country is very monotonous, and no mountain I have ever ascended in the tropics presents a panorama equal to that from Snowdon, while the views in Switzerland are immeasurably superior.”

It may not be the finest panorama in Malaysia, but if you are lucky you will be able to make out the coastline near Malacca and enjoy the clouds swirling around the summit. You will also see the large telecommunications compound lower down the summit ridge. Anyone who has studied the mountain on Google Maps or similar will see that an access road leads up the mountain to this compound. Sad that the mountain has been disfigured in this way, but equally impressive that it only becomes clear when you reach the summit.

Those thinking that the access road might be a good way of sneaking in will be sorely disappointed. You may be able to even drive halfway up the bumpy track but you will eventually meet the traditional no entry warning signs which promise a hefty fine or imprisonment if you go any further! Even if you could, it is by no means clear that you could actually get from the compound to the summit anyway, especially given how steep the terrain is. So, best avoid even thinking about it!

The cutoff time for descending is 2pm to ensure everyone is back before dark, and as previously noted the descent route is slightly different. From the peak you will probably have seen the telecommunication compound on a lower part of the summit ridge. The trail leads in that direction at first. Shortly beyond the summit you will reach another important junction (1,250m) which is well signposted. To the right is the Asahan trail up from the Malacca side and down to the left in the trail back down to Park HQ. In the middle in an information board on the myth associated with the mountain.This is the usual lunch spot for hikers as there is a bit more shade compared with the bald summit.

There are roughly 15 ladders to clamber down before the trekking becomes much easier and rather delightful in nice weather. There is a pleasant spot by a stream with a shelter a place for Muslims to pray (1,078m, ‘kem senget’). After this, the trail leads up a little onto a lovely ridge with orchids and pitcher plants (1,105m) and one or two glimpses back up to the summit. There are apparently 3 different species of pitcher plant on this mountain.

The trail then turns sharp left (1,110m) and it is mostly descent all the way from here back to Simpang Pedita where you meet the original trail.

For those interested in trying the Asahan trail, this can also be booked via the National Park. It leads from Lubuk Kedongdong via Enggang Berangan (CP1 – 319m), Hentian Hanuman (CP2 – 530m), Hentian Unggas (CP3 – 682m), Lembah Beruang (CP4 – 647m), Batu Berlumut (CP5 – 825m), Padang Batu (CP6, 895m) which is the optional camping area, and Gunung Runduk (CP7 – 1,125m). Unfortunately there is a sign at this trailhead stating that hikers are not allowed to ascend this way and descend to Sagil / Lagenda meaning that a traverse may not be allowed. 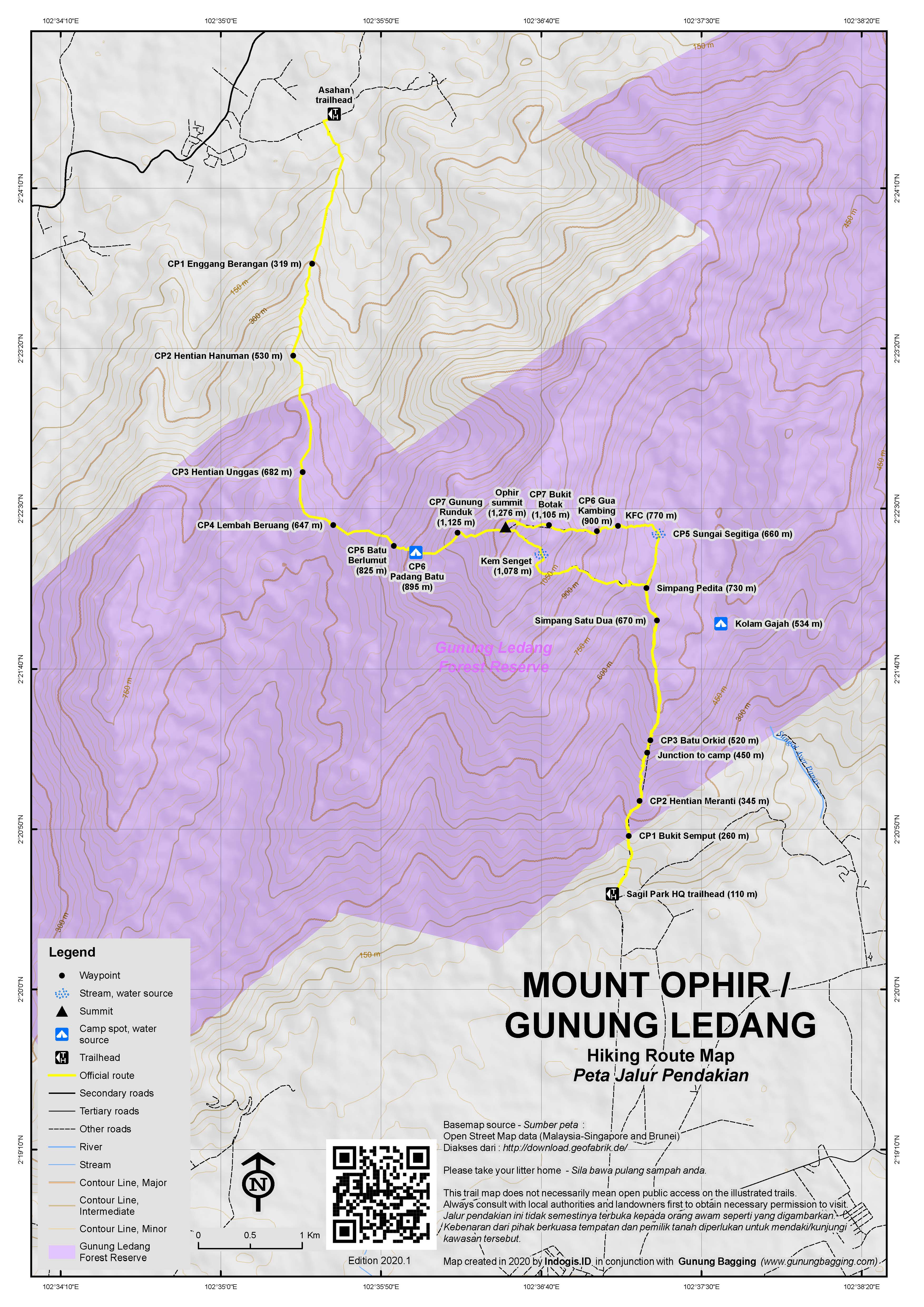