Mount Kerinci is the highest volcano in Indonesia and the highest Indonesian peak outside Papua (Irian Jaya). Much of the Kerinci Seblat National Park is located in the province of Jambi but the mountain itself is on the border with West Sumatra. We are listing it as being in Jambi because local people regard Kerinci as a region of Jambi and because it is most commonly climbed from the Jambi side. Considering its height, Kerinci is not as difficult a climb as you might think and the views from the top are amazing. The closest airport is Padang from where it is a 6-8 hour road journey to the nearest accommodation to the Kerinci trail, at Kersik Tuo (also spelt Tua, 1,519m). Transport can be arranged at Padang airport or by contacting one of the homestays in advance. However, given the length of the journey it doesn’t come cheap so it isn’t recommended unless you have a group of 4 hikers minimum.

Although it is possible to get to the top and back in a very, very long day (minimum 12 hours hiking there and back), it is recommended that you spend a night on the mountain at Shelter 2 (3,045m) or even the more exposed Shelter 3 (3,306m). The summit is usually cloudy after mid-morning so if you want to admire the views it is best to plan on reaching the top for dawn the second day before making the descent back to Kersik Tuo. The water sources are not totally reliable so make sure you take ample supplies.

You need to obtain a National Park permit, available from one of the homestays in Kersik Tuo or the local Park Office, which currently costs a reasonable Rp 20,000. It is also a good idea to take a photocopy of your passport with you. The best known homestay in the area is the one owned by Pak Subandi, one of many ethnically Javanese who live in the area. He is an expert on flora and fauna and many people stay here to explore the amazing animal and plant life including incredibly rare birds, pitcher plants, Armorphophallus titanium (the tallest flower in the world) and perhaps even elephants and tigers or even the mysterious Orang Pendek, a bipedal ape of Yeti-like reputation. There are plenty of guides available and Pak Subandi will provide you with some excellent meals of local produce both on and off the mountain. Make sure you discuss the cost in advance to avoid being surprised when the bill arrives.

The trail itself starts about 5km west of Kersik Tuo, through the tea plantations past the very visible statue of a tiger. At the end of the road at 1,755m there is a dilapidated signpost beside fields of chillis and potatoes. The trail leads past a ranger post and up into the forest (‘pintu rimba’). After 30 minutes, Pos 1 Bangku Panjang (1,915m) is reached and after another 30 minutes you should have reached Pos 2 Batu Lumut (2,020m).

Pos 3 Pondok Panorama is next (2,211m) and there is a shelter and unreliable water source. Shelter 1 (2,520m) follows and sections of the trail here are steep muddy gullies which can be problematic when it rains but generally there are no technical difficulties.

Soon after reaching the 3,000 metres elevation mark, there is a small path leading down to Shelter 2 (3,045m) on the left. This is the best camping area on the trail as it offers some protection from the wind and there is often a source of water down in the gully beside the camping area. There are metal frames here so extra tarpaulin would be excellent to keep you extra protected from getting soaked in the usual afternoon rains.

It takes 3 hours to the summit from here which means a starting time of 3am if you want to see the sunrise from the top. Alternatively you can camp higher up beyond the treeline at Shelter 3 (3,306m) which will save you an hour in the morning. It is much more exposed but you will have great views of neighbouring Gunung Tujuh and the Gunung Tujuh Lake from your tent.

From the edge of the treeline, the trail is steep and there is plenty of shallow scree to negotiate. It is a good idea to wear gloves and make sure you have a torch you can attach to your head so you have both hands free. There is a monument (Tugu Yudha, 3,690m) to a lost hiker before the tiny summit area appears quite suddenly.

The peak is marked with a cairn and flag which lies between two rocky outcrops. Down below steeply to the right is the smouldering crater and to the left is the Indian Ocean. Views are extensive – you should be able to see Gunung Tujuh on your right, Gunung Raya and Gunung Masurai to the south, and Gunung Talang, Gunung Marapi and Gunung Singgalang to the north.

After celebrating having reached the top of Indonesia’s highest volcano, it is a long walk back down to Kersik Tuo and Pak Subandi’s delicious potatoes.

UPDATE: As of 2017, there is now a second official route from South Solok in West Sumatra, which is closer to Padang airport. Do leave a comment below if you have already tried the new route. 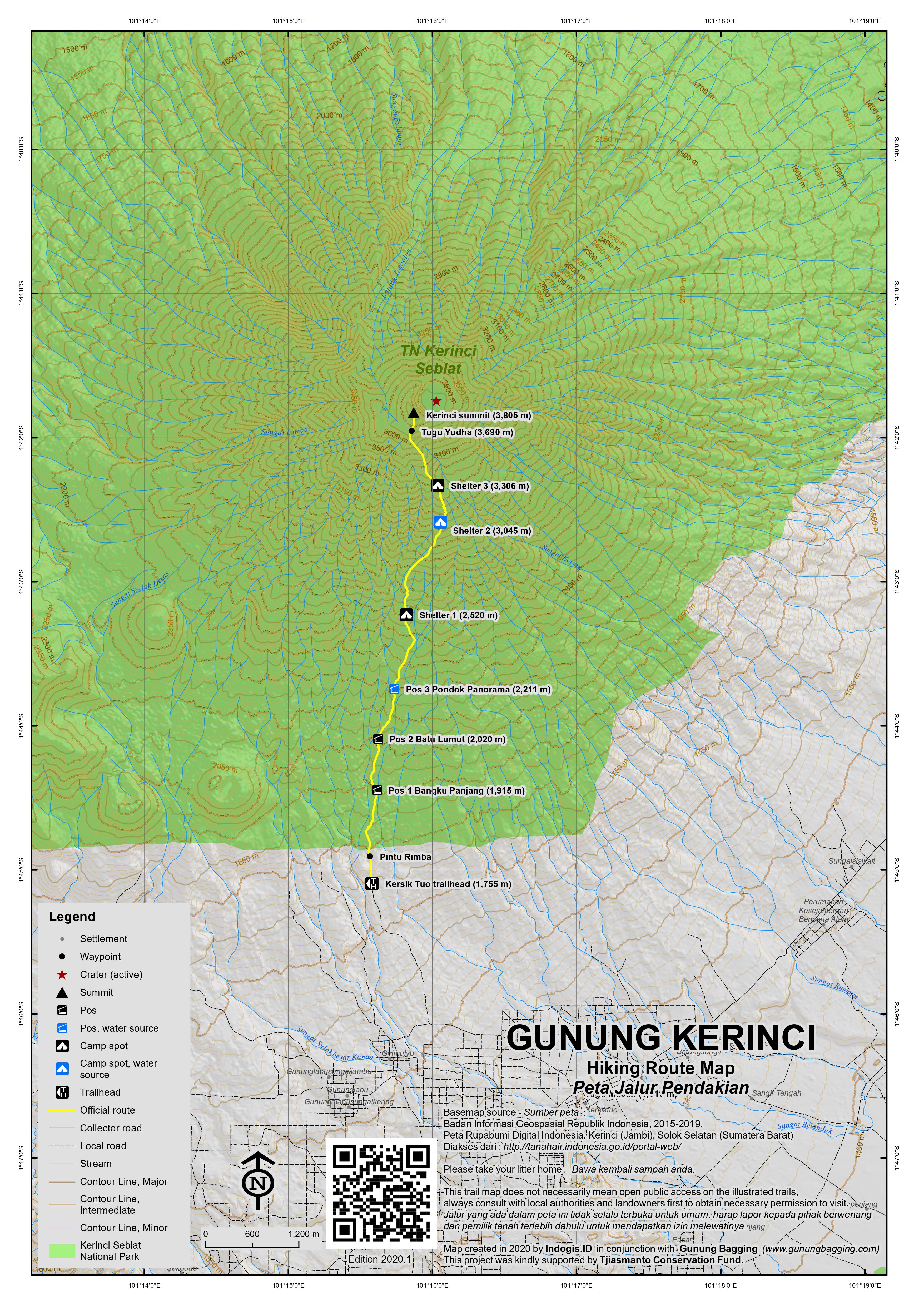 The name Kerinci is derived from the word “Kurinci” in Tamil language. A long time ago, the Tamil land was divided into four districts and each one was named after a local flower to characterize the district. The specific flower related to the highlands is the Kurinci flower (Strobilanthes). Therefore, Kurinci also means “highland”. It is the name of the region, the people (tribe), the volcano, and a lake in the region. Over time, the spelling of Kurinci has shifted. Kurinci was changed into Kerinci for formal Bahasa Indonesia. Related words and spellings include Kincai, Kincei, and Kinci. (Dewi Fovilia, 2011)