Gunung Daik is the highest point of Lingga island off the east coast of Sumatra. It is a very striking mountain, with two jagged peaks and a third lower one. The highest is Daik, the middle Pejantan and the lower of the three is named Cindai Menangis. Nobody has ever reached the highest peak because it is a very serious rock climb but a Belgian rock climber reached the top of Pejantan about 20 years ago with the help of 9 locals over 5 days. The shape of the highest peak of the mountain gives the island its name – linggam is Sanskrit for ‘phallus’.

Although this is a remote and sparsely-populated part of the Riau islands, it is probably just about possible to reach the island in one long day from Singapore (via Batam) if you can make it in time for the 11am ferry leaving Tanjung Pinang each day. Indeed, many folk first notice this remarkable mountain when flying over the island to or from Singapore. The ferry journey itself is a great one so long as you either get a window seat or wander outside from time to time to enjoy the views of small fishing villages. The daily ferries call at a number of remote communities and few tourists come here (at the moment).

There are actually two piers on Lingga that the ferries call at: Sungai Tenam in the north of the island and Tanjung Buton in the south. Between these two stops there are a couple of others (tiny Pulau Pulon plus Jagoh on Pulau Singkep). Tanjung Buton is much closer to Gunung Daik, but if you are in a group and don’t especially enjoy boat journeys then consider getting off at Sungai Tenam and hiring a car to Kota Daik (roughly 40km) as Tanjung Buton is another 2 hours beyond Sungai Tenam if you stay on the ferry.

The trailhead is just 3km or so outside the main town of ‘Kota’ Daik, which is itself just 15 or 20 minutes by ojek from Tanjung Buton pier. Keen hikers can do a day-hike of Gunung Daik if they start early and are happy to trek for ten hours or more (in total), though bear in mind that the cliffs at the top are severe and you may not even see them from the trail as, being the only significant mountain for a very long distance in all directions, the highest peaks are often shrouded in cloud. It does however make a great forest trek. For those wishing to do a bit of proper rock climbing, and anyone genuinely hoping to try to climb to either of the two highest peaks, you will need several days and a great deal of rock climbing experience.

From the entrance arch at the trailhead near Kampung Pahang (if you pass the Pahang mosque you are heading in the right direction out of town) the trekking is mostly on flat ground but at sea level – meaning an early start is desirable to avoid the hottest part of the day. The path passes pepper and rubber plantations and you soon reach a sign for Makam Megat Kuning – ancient royal graves of considerable significance. If you have time on the way back it may be worth a visit, but for now turn left to continue to Gunung Daik.

After another ten minutes you will reach an old wooden bridge over a small river. It is best to go one by one over it as it may no longer take the weight of several people. From this point the path follows a white water pipe and after another 15 minutes you will have reached a sign for forest conservation. After a further 10 minutes you will be at Shelter 1 (also known as Gajeboh 1, 30m) which is just a few metres from Lubuk Fatimah (may also be called Lubuk Belacan). This Shelter is well-constructed and has a proper roof so in heavy rain it would make a good place to have a rest, though it should have taken you no more than 45 minutes or so to reach this point from the start of the trail.

The trail now leads across the wide but usually gently-flowing river, so be prepared to either wade across in boots or else take them off. A couple of small streams feeding into the river are now crossed and there are a couple of rather overgrown sections. However, do keep your eyes peeled for pitcher plants as there are plenty in this area. The species on this mountain are Nepenthes gracilis, ampullaria and their hybrid – thanks to Alastair Robinson for IDing them. The trail continues to follow a water pipe but by this point it is grey. The path continues alongside the wide river and after less than 2 hours in total from the start you will reach a ‘pipe bridge’ that goes over Sungai Teko – a small river (90m above sea level). Check your clothes for leeches at this point as there are one or two on the trail. The path climbs slightly to an area of magnificent trees with buttress roots (120m), a number of which are part of a scientific study relating to carbon emissions by scientists based in Bogor, West Java. A couple of these grand trees have toppled over so this is perhaps the most tricky section of trail.

Soon you will reach Shelter 2 (230m) where there is another decent shelter to take a rest. There is a nice river 3 minutes away down to the left where there is a small waterfall and pool for bathing. From Shelter 2, the mountain trail continues to the right and passes several signs with seemingly contradictory information about how much further it is to the top. Perhaps some signs means the base of the cliffs and some simply mean the so-called camping area (Shelter 3). Listen out for monkeys around here as the trail starts to lead up the mountain finally and onto some steep ridges. An hour on from Shelter 2 and you will be on a fairly narrow ridge with a few views between the trees to the higher slopes of the mountain. If you can see a peak to the left it is probably Cindai, the lowest of the three but most accessible.

The most dramatic part of the trail comes next and is known as Punggung Naga (dragon’s back, 600m) and is a very narrow ridge with good views on both sides. Be very careful here and remember to use the ropes that are tied to branches as a fall would be disastrous. You should be able to see Kota Daik below on the left and also the coastline.

90 minutes beyond Shelter 2 (or about 5 hours of hiking in total, not including rests) and you will have reached Shelter 3 (730m) which is also known as the campsite. To be honest, it is not flat because of all the lumpy roots and there is no shelter, so spending a night here may not be the most comfortable -although the views are fine. A sign here suggests that there is another kilometre of trail to go, presumably in terms of distance, and this is likely to take around 90 minutes in total, though it is farily steep. From what we can gather, the trail ends at the base of the steep cliffs of Cindai, around 1,050m above sea level. Fast hikers with daypacks can make it back down to the trailhead in about 4 hours.

It’s a shame that more of the summit cliffs cannot be seen by ordinary hikers (as opposed to expert rock climbers) but the trekking here is pleasant and a trip to Gunung Daik is a great excuse to explore a remote and friendly island that still sees few tourists.

Bagging information by Dan Quinn (March 2017). Thanks to Nick Hughes for lending me his GPS for height readings! 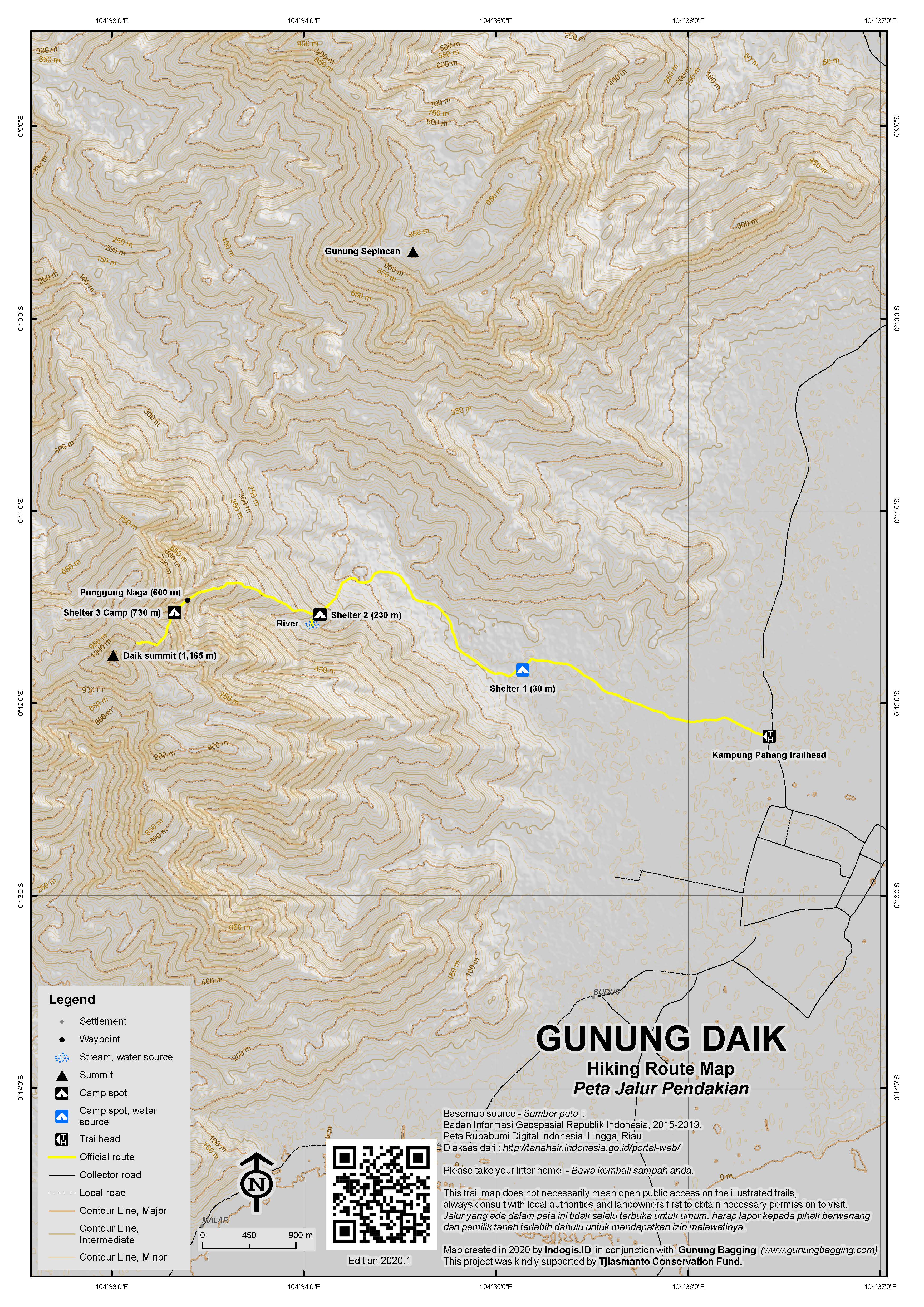