Gunung Bujang Melaka is a small mountain lying just to the west of the Banjaran Titiwangsa (or Main Range), separate enough to be a Ribu in its own right and accessible enough from the road and nearby train station at Kampar at the western side to be quite possible as a day hike.

The name is quite an unusual one, literally meaning ‘the bachelor of Melaka’, especially as Melaka (Malacca) is a long distance away. It has been proposed that ‘bujang’ is actually from ‘bujangga’ meaning serpent or dragon, as mountains in ancient times were associated with dangerous beasts and in some places in eastern Indonesia still are. The origins of the name of Melaka city comes from the Melaka tree (Phyllanthus emblica, ‘pokok Melaka’ or Indian gooseberry) so it is possible that the area was known in the past for a place where these trees were grown.

From the village of Batu Berangkai (70m) just 1 kilometre from Kampar train station, it takes most hikers around 4 hours to ascend and 3.5 to descend, not including breaks. Many choose to camp one night at one of several suitable places on the trail, and some hike the neighbouring lower peak called Gunung Relau (951m).

The trailhead proper is the waterfall car park (150m, CP1) which is popular with locals at weekends so it is recommended you arrive early. The waterfall is just on the right, near a small Chinese Buddhist shrine with incense at the base of a large tree. Follow the track into plantations, keeping the river on your right for the most part, and near to a few water pipes leading up the gentle slopes.

There are a few minor trails in this area so it is easy to get lost, but if you follow the river and water pipes you should arrive at Pondok Orang Asli (275m, CP2) in just 20 minutes or so. This is a simple dwelling lived in by a small number of members of Malaysia’s indigenous people, presumably the Senoi tribe. Just before Pondok Orang Asli, look out for a Button Mangosteen tree (garcinia prainiana), a pleasant fruit known to locals as ‘cherapu’ or ‘ceropu’.

Beyond Pondok Orang Asli, the trail continues to gradually lead up the hillside in the river valley leading towards the col between the two main peaks of the Bujang Melaka range, namely Bujang Melaka itself (on the left / north) and Gunung Relau (on the right / south). Some hikers have actually accidentally climbed Relau instead of Bujang Melaka because although the trail to Bujang Melaka is well-marked, the junction for Relau (306m, near the river, small camp area just beyond) is not properly marked at all! If you follow the most well-used path you should have no problems, and after this point there is only one trail (other than very short sections of alternative path which always rejoin the main trail shortly after).

Listen out for siamangs in this area as there are many in the forests here. The next landmark is Balak Camp (475m, CP3) which fit hikers will have reached in an hour or just over. This is a decent sized area with enough space for 4 or 5 tents. Less than a kilometre beyond is a ‘water point’ (685m) with a sign), although on this trail you are never truly far from a stream until above 1,000m.

The steepest section of trail follows, with several roped sections over tricky roots and steep rock, although nothing especially technical. There are several small streams to cross and a large fallen tree trunk to clamber over with the help of a thin rope. If you look south you will be able to see the lower Gunung Relau (951m) a couple of kilometres away. There is also a very beautiful overhanging rock (770m) which would provide a little shelter in times of rain. Fit hikers should have arrived here in just over 2 hours total from the waterfall car park.

Lebah Camp (1,014m, CP4) is the largest and most popular camping area and is a delightful temperature. The last water source is down to the right, just two minutes away from the camping area. Most hikers should be here within 3 or 3.5 hours (not including breaks).

Checkpoint 5 soon follows (1,185m, Permatang or Persi Camp) and is not really very suitable for camping due to its small size and uneven, rooty ground. The trail beyond Persi Camp leads down a little way before ascending again to the true peak of Gunung Bujang Mekala. About 50 metres before the peak is another lovely boulder worthy of a few photographs.

The summit of Bujang Melaka is a small clearing with summit signs, the usual ‘beirut’ (surveyors’ large metal tripod) found on mountain summits across Peninsular Malaysia and a limited view from a cluster of small rocks. These rocks appear to be the highest ground and in good weather the view is reasonable, but do take extra care here because there is a large hole between the rocks and falling down there would cause serious injury.

The summit signs suggest the peak is 1,233m high, but other sources suggest 1,234m and 1,240m respectively. Our GPS gave a reading in excess of 1,240m so the latter could definitely be possible. Fit hikers will have reached the top in 4 hours or less, whereas those feasting on noodles and cigarettes every 20 minutes will need considerably longer.

Gunung Relau is well worth an explore too, but as the junction with the main Bujang Melaka trail is at an elevation of only around 300m, it means you have an extra ascent of 650m if you are fit and keen enough to try to fit it into the same hike as Bujang Melaka peak. Although there is no view at the top of Gunung Relau and the trail there is steep, there is a large amount of old ammunition boxes from British colonial times. Quite when or what this stuff was left there for originally is unclear!

Back down near the Pondok Orang Asli, about 200 metres before (on descent), is a small wall which may have been constructed in colonial times and may potentially be linked to the ammunition boxes at the top of Gunung Relau. Presumably the British military came this way to Relau. If anyone can shed any light on the history of this site please do get in touch below.

Honey lovers might like to know that an unusual local honey made from stingless kelulut (bee) is available locally. Ask in the village for Pak Nordin. 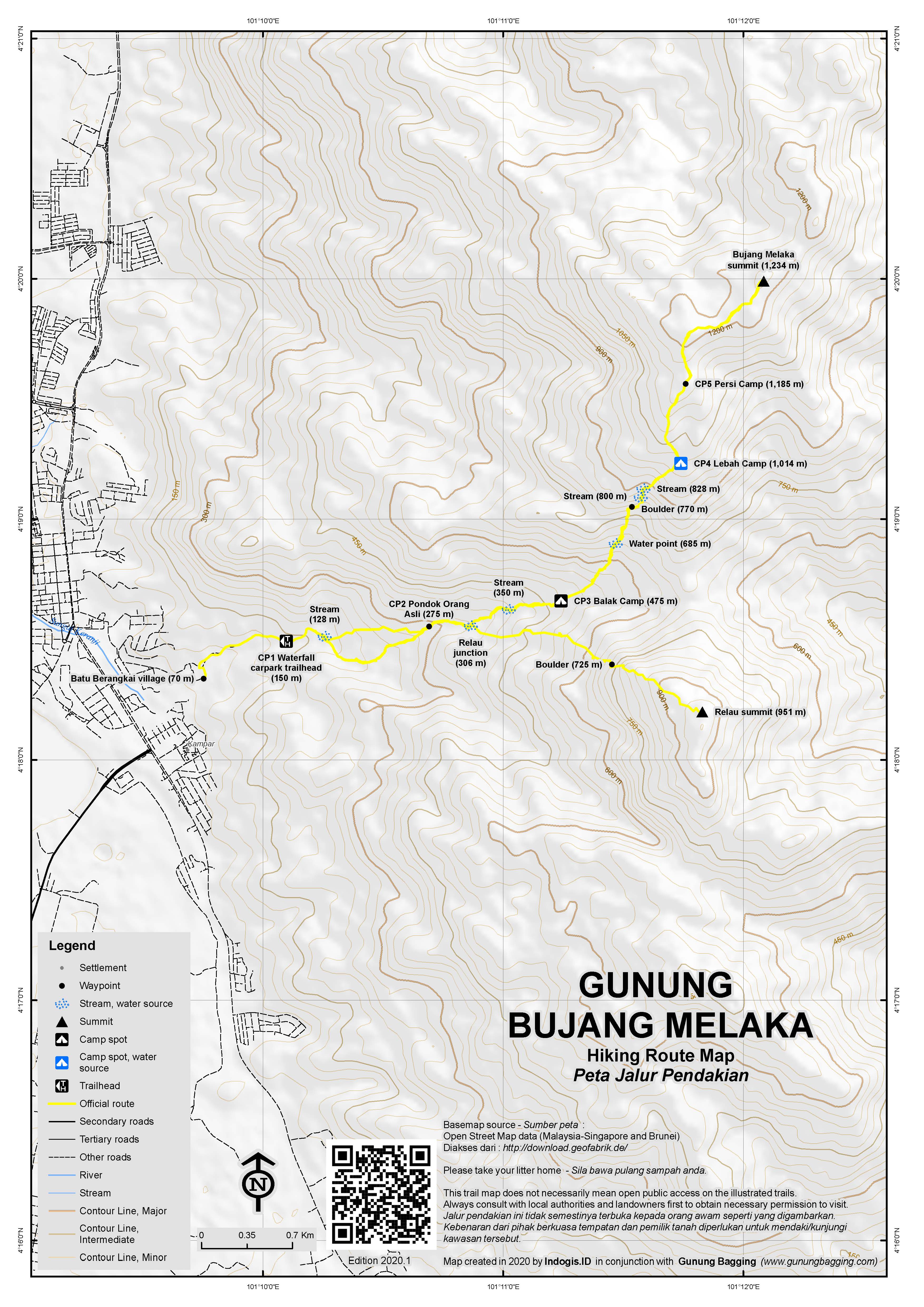