Gunung Ara is the highest point on Komodo Island, which like neighbouring Rinca Island lies between the larger islands of Sumbawa and Flores and is famously home to the Komodo dragon. Komodo Island has the largest population of the huge lizards with an estimated figure of over 1,700 of them.

Gunung Ara is also the highest peak in the whole of Komodo National Park. The relevant Bakosurtanal map lists the highest peak on the island as ‘Golo Ara’ at 808m high. Some online sources state that Gunung Satalibo, at 735m Komodo’s second-highest peak, is more commonly hiked but it lies a good 6 kilometres to the north-east of Gunung Ara and there are no descriptions or reports of anyone having been there in recent years.

Some sources state it takes just over 2 hours to reach the top of Gunung Ara from the Ranger station at the sheltered bay of Loh Liang but on a 2020 trip we could find no rangers who claimed to have ever been there and plenty of reasons why even attempting a hike to the true summit would be inadvisable in the extreme.

Juvenile Komodo dragons live in trees for the first few years to avoid being eaten by cannablistic adults, and the saliva of the juveniles is just as dangerous as that of the adults. Given that the higher parts of Komodo Island still have forest on them, unlike the hot, dry lower parts, it seems likely that bagging Gunung Ara would involve numerous encounters with hostile dragons!

Despite this, there is allegedly some evidence to suggest that the original people of Komodo island lived high up on Gunung Ara. Now, however, the population is on the coastal fringes, with National Park staff at Loh Liang on the east coast, and a substantial village a few kilometres south.

A small number of tourists and locals have been injured or killed by Komodo dragons on Komodo Island, including in 1974 when Swiss conservationist Baron Rudolf Reding von Bibiregg vanished above Loh Liang after sustaining a knee injury, some of his possessions later being found. There is a white cross commemorating him. But such a fate is rare, especially if you stay together with your group and guide.

Most visitors go on a short wildlife trek from Loh Liang. Unsurprisingly, an official guide is mandatory, and larger groups will be accompanied by 3 or 4 guides who bring forked sticks with them to restrain any Komodo dragons in the event of aggressive behaviour. There are short, medium and long treks available, all requiring an hour or two and usually including a visit to a water hole where the animals of the island such as wild pigs, deer and of course the Komodo dragons often congregate.

Despite media reports, Komodo Island remains open to tourists in 2020 and it is Rinca that is now closed until the end of June 2021. Local and national government plans seem to suggest that anyone wanting to visit Komodo island from 2021 onwards will have to purchase an annual pass with a price so high it will prevent most ordinary people from the opportunity of visiting. Whether or not this turns into reality remains to be seen.

The best viewpoint in Komodo National Park that can be accessed easily is on Pulau Padar (Padar Island) which lies between Komodo and Rinca. From the pier on the south-east coast, an easy stone path leads up to the south offering tremendous views to the bays below, rocky peaks in the north of Padar Island and Komodo’s Gunung Ara in the distance beyond.

There is a small population of Komodo dragons on Padar Island, 7 according to an official report but closer to 20 according to guides in 2020. These are rarely encountered near the viewpoint but be aware that it is not impossible to see them near Pink Beach.

Pink Beach, on Padar’s west coast, is another popular stopping point on tours, with a beach made pink by red coral, and offering great views across to Gunung Ara on Pulau Komodo.

In 2020 whilst Pulau Rinca is closed, decent one-day trips from Labuan Bajo usually involve an itinerary including some or all of: Pulau Padar viewpoint (done first to avoid the midday heat), Pink Beach, Komodo Island, the tiny sand island of Taka Makassar north of Pulau Padar, Manta Point for spotting manta rays, and then Kanawa Island on the way back to Labuan Bajo. 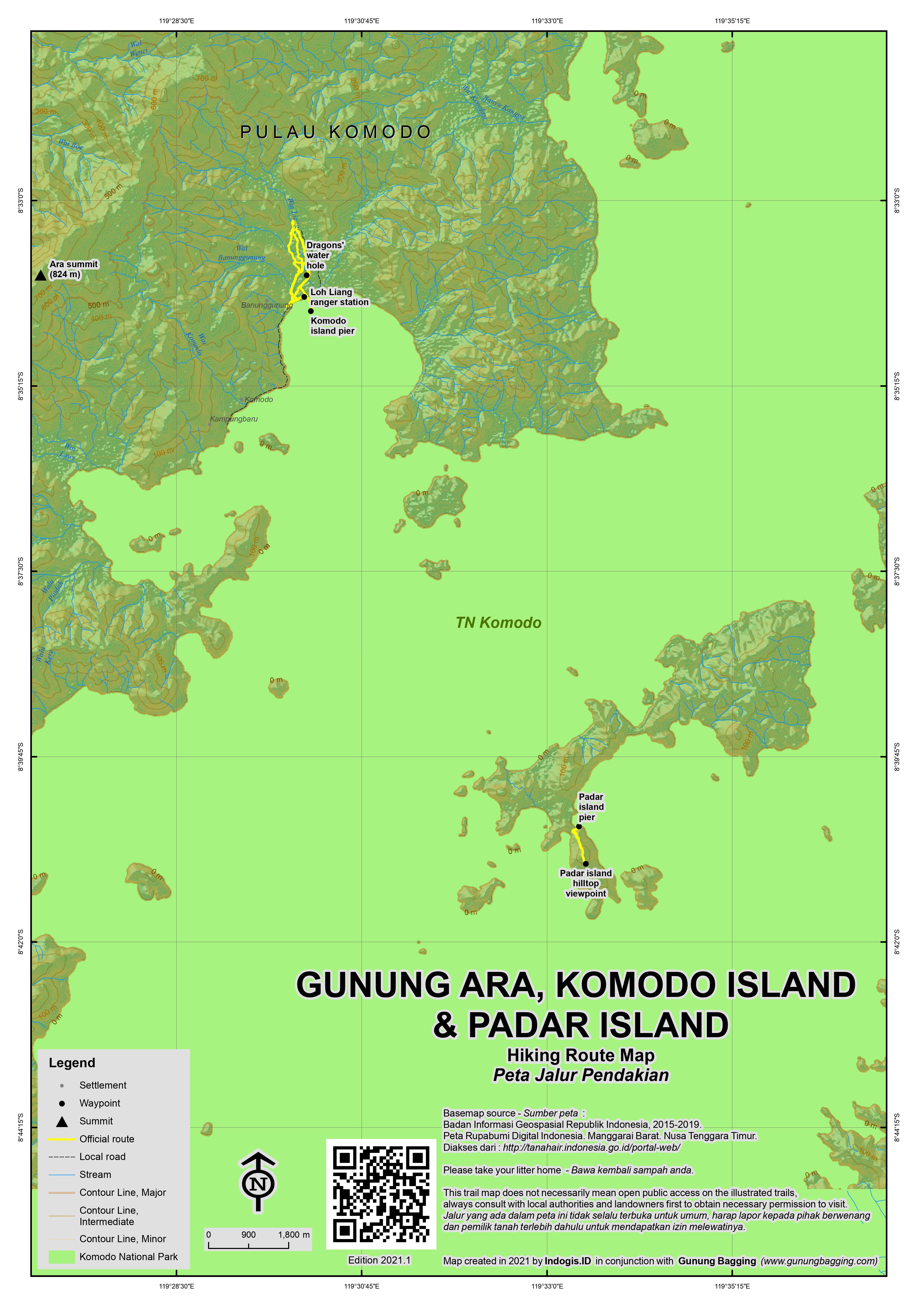 One thought on “Ara”