‘Onion Mountain’ is probably the most accessible hike of any great significance in West Kalimantan. Despite being less than 1500 metres high, the mountain has a huge amount to offer adventurous hikers including gorgeous rivers, pristine forests home to hornbills, pitcher plants, black orchids and all manner of creepy-crawlies plus stunning, panoramic views from the summit. One of the easier mountains to ‘bag’ in Borneo, Gunung Bawang remains relatively unknown to hikers outside of the province.

There are two trailheads – one at Desa Madi near Bengkayang and one at the village of Sungai Betung down a rough track which runs alongside a river and below the mountain itself. The latter is slightly more accessible and shorter – and so more frequently used. A couple of warungs selling snacks and drinks marks the junction – a few kilometres before Bengkayang – where you must turn left down a track to Sungai Betung village. Allow one hour and take motorbikes because there is a river which is often too deep to ford in four-wheel vehicles (so you instead take your motorbikes over the pleasant bridge).

The village head lives opposite the small pink and blue church and he is the man to register with (and pay just a few thousand rupiah). If you don’t already have a guide (which is essential) then he should be able to find someone to accompany you. The village is at an elevation of about 80m and those with motorbikes can continue for another couple of kilometres up the hillside directly behind the village head’s house beyond an entrance sign and large ceramic vase (165m) up to a cluster of abandoned and dilapidated buildings at the Sei Sansak river (218m) which used to be for producing electricity but are now regarded by hikers as the ‘basecamp’. They are padlocked but you can still find some limited shelter should it rain and there are plenty of flat areas ideal for camping should you wish. The river itself (250m) is gorgeous and perfect for a wash or swim both before and after the hike. Bear in mind that in the rainy season you may have a little difficulty getting your motorbikes back down the muddy trail which is steep in places.

The hike proper begins behind the basecamp buildings. First you must cross the river itself (prepare to get your feet wet on this hike!) before ascending up to the right. Little black plastic bits of string tied to trees mark the route every hundred metres or less but even so it is easy to get lost here even with a GPS. There are lots of birds to be heard and occasionally seen in the forest and you should be able to hear the hornbills at an elevation of around 500m. At about 523m is a rock which looks at first like a man-made wall. It is the first of many rocks and cliffs in the middle section of the trail, some of which require careful scrambling and the use of all four limbs to clamber up near-vertical walls and roots. At 569m is a minor cliff-face with water often dripping from it.

A larger cliff is at around 623m before you reach an absolutely stunning little spot in the middle of the forest where water comes cascading down cliff faces (689m). This would make a wonderful place to camp for those not limited by time schedules. There is even a flat area where you could pitch 3 or 4 tents right next to the stream. From this point on check your boots and legs regularly for leeches (‘pacet’) as there are plenty of them in the higher parts of the forest. The trail continues weaving its way steeply up the side of the mountain, around large boulders now and again – a couple of which are almost cave-like and offer decent shelter from the rain, before reaching the edge of a ridge at 1,097m. This is known as ‘puncak 1’ by local hikers although it is not a proper peak of any sort but it is a reasonable spot to pitch a tent or two.

‘Puncak 2’ (1,235m) is reached after another 20 minutes or so and once again there is space for tents. By this point the vegetation has changed remarkably and there are orchids and moss and occasional pitcher plants. The trail drops down before ascending steeply again. Another spot at 1,336m in the middle of the trail (perhaps you could call it ‘puncak 2.5’) is reached before the views of surrounding mountains and valleys below begins to open up dramatically. The true peak ‘puncak 3’ is delightful and because of the lower vegetation offers stunning views in all directions. There are two cement summit markers and a couple of tiny water pools which are reasonably reliable during the wet season.

The large, prominent peak to the south is Gunung Berasi – the second highest in the range at approximately 1,415m. The Bakosurtanal map lists Bawang as 1,265m and Berasi as 1,224m but both of these figures are considerably lower than the real elevations.

In the distance to the east you may be able to spot Gunung Niut if you are very lucky indeed. Looking back along the ridge to the west you will see the lesser mountains closer to Singkawang, although from this angle the thumb-like Bukit Jempol cannot be seen clearly. In extraordinary conditions you may even see the ocean in the distance.

All together, assuming you walked from the village of Sungai Betung, it should have taken you about 6-8 hours to reach this point – perhaps one of the finest viewpoints on the island of Borneo given how densely-forested most peaks are here. Fit hikers can be back down at Sei Sansak river basecamp in about 4-5 hours for a good splash in the water before heading back out from this remarkable area. 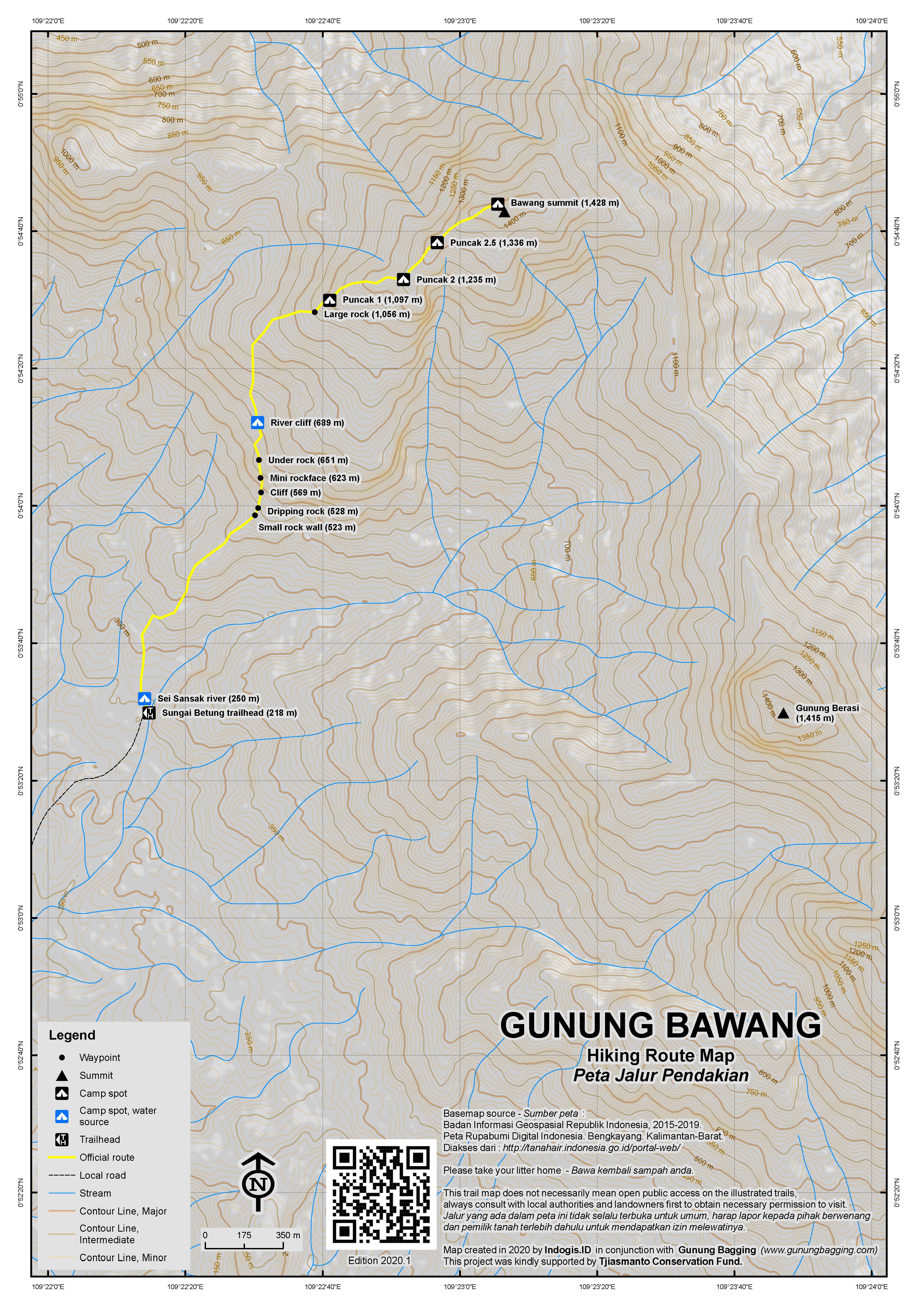 ‘Onion Mountain’ in Indonesian. This is apparently because the peak resembles the top of an onion – with layers surrounding the central highest peak.