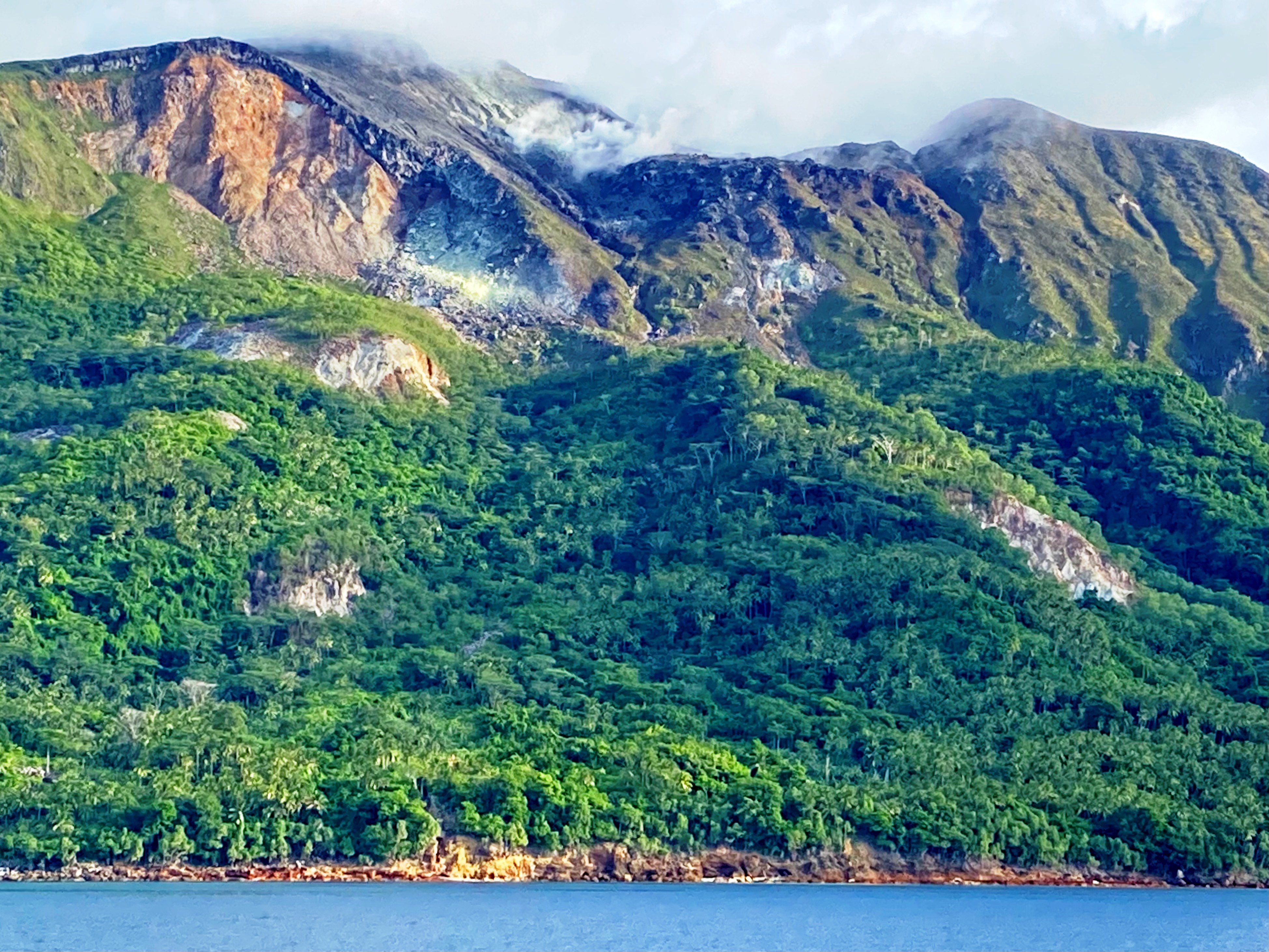 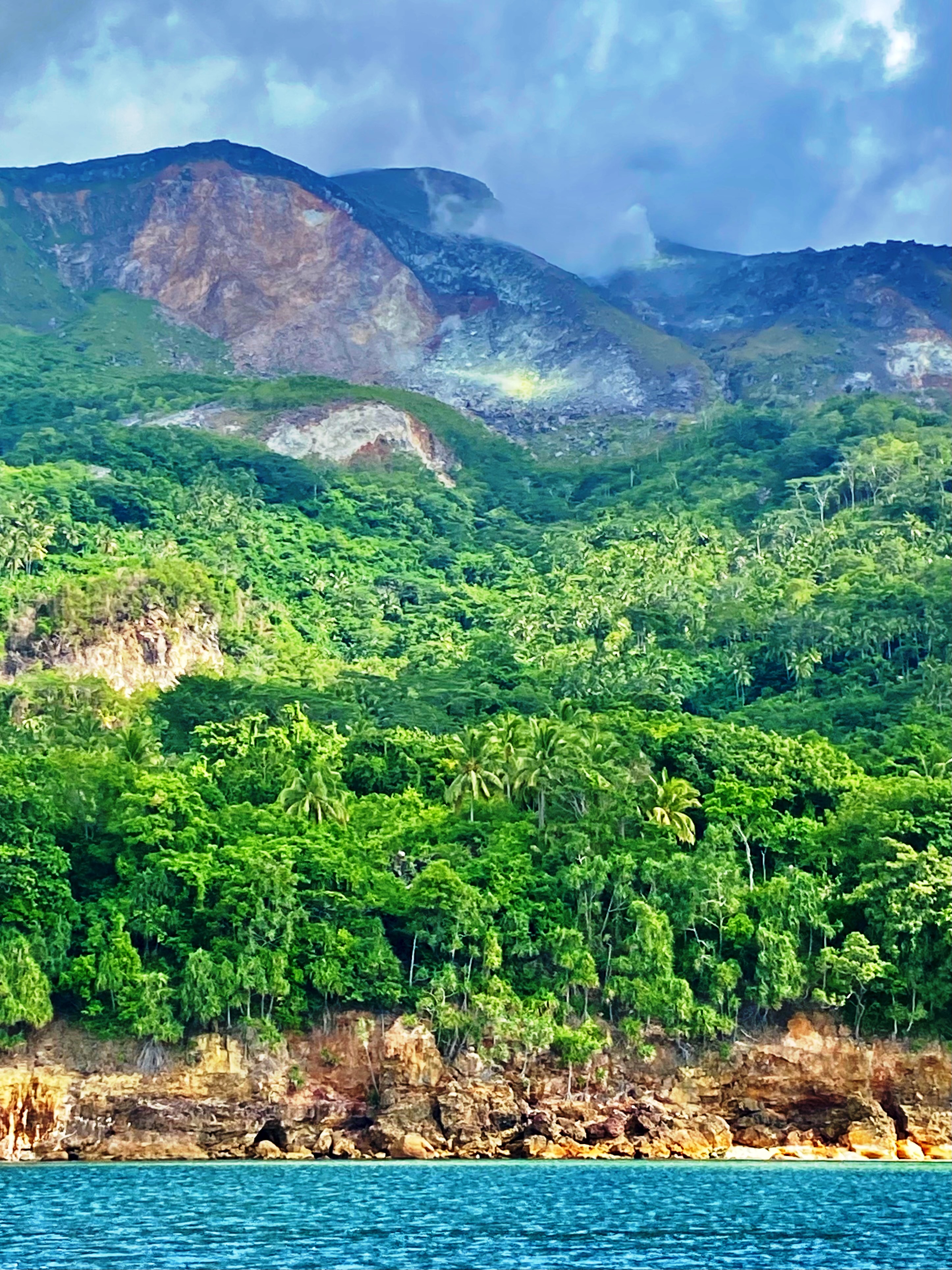 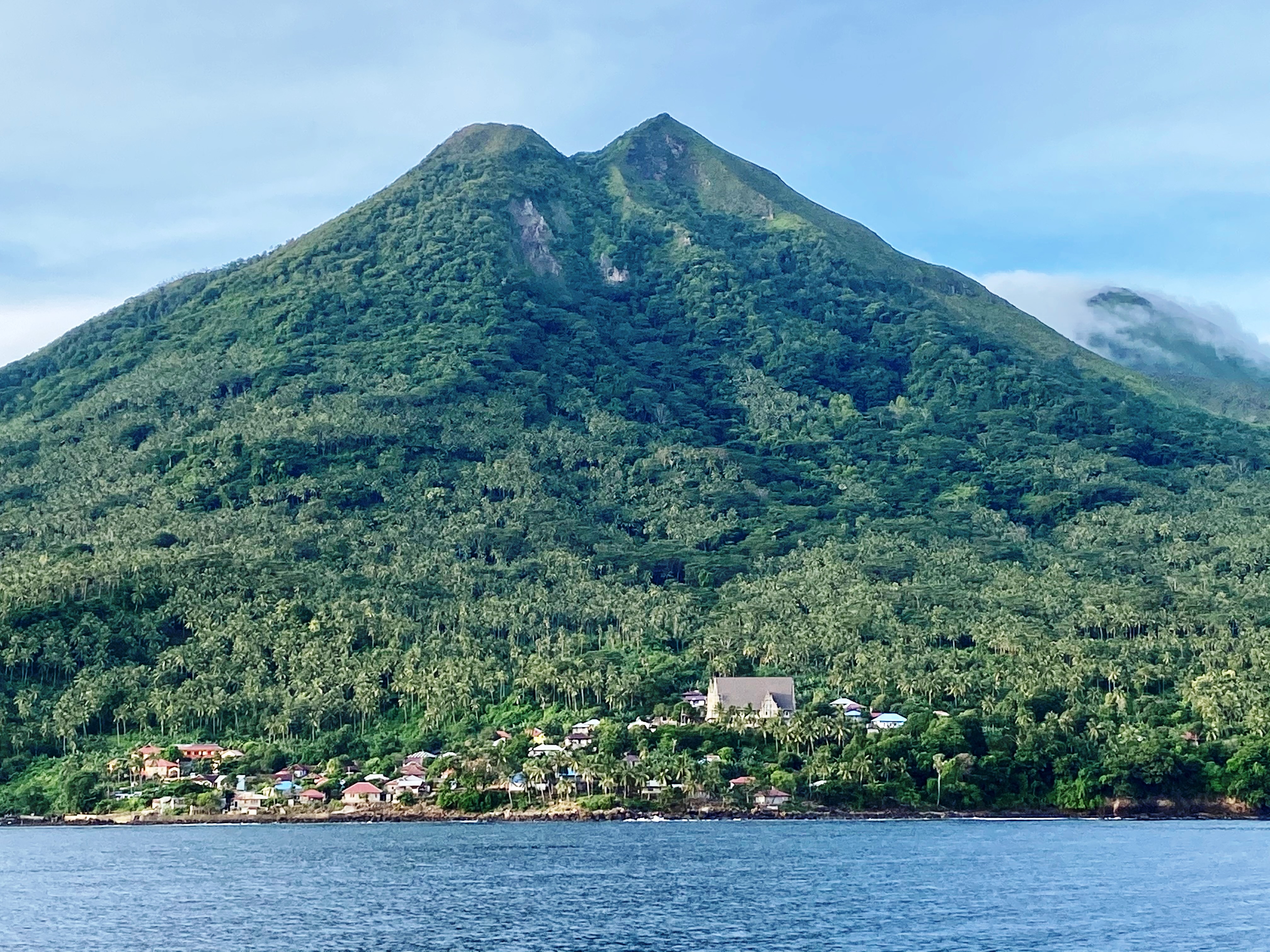 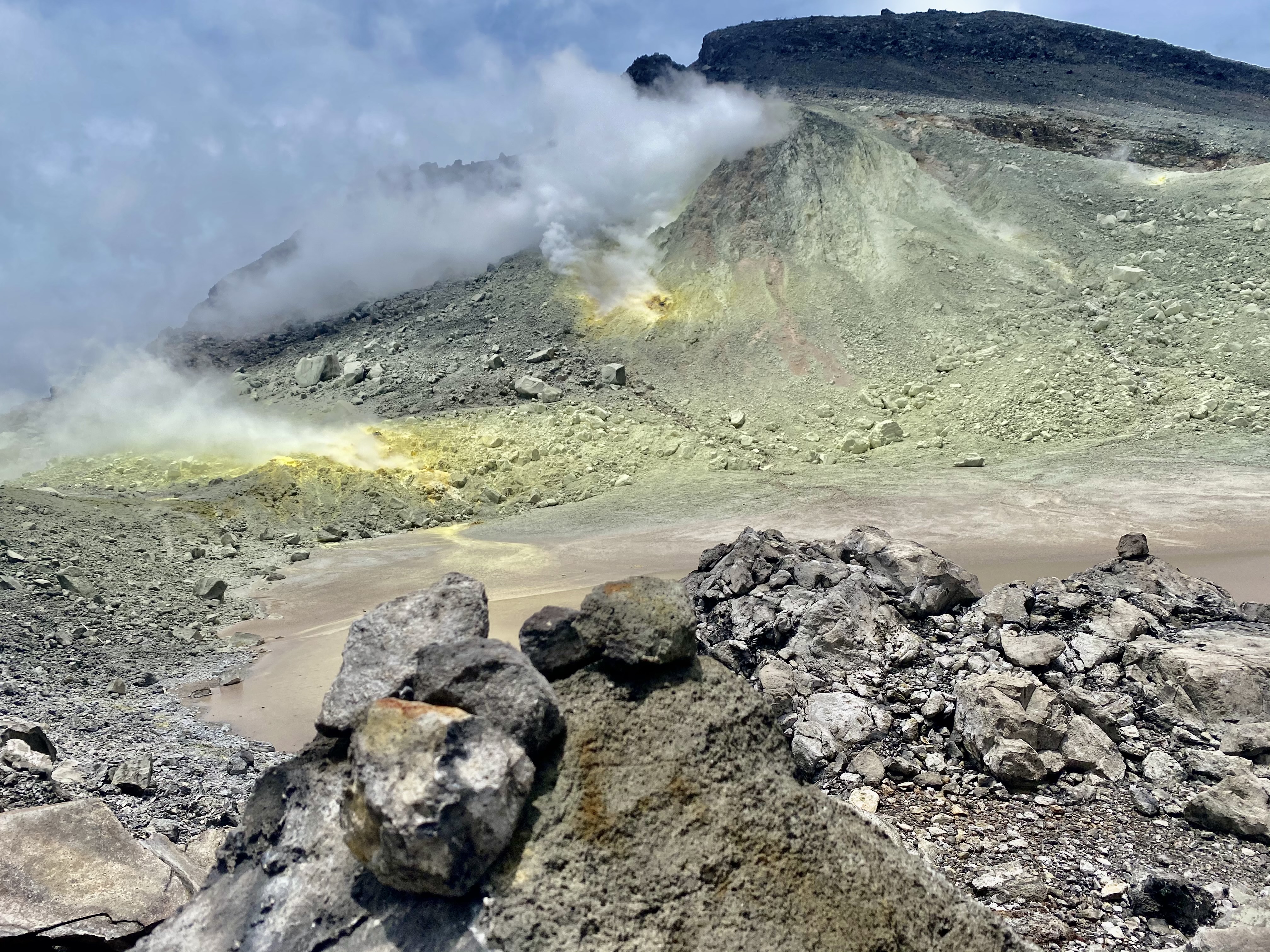 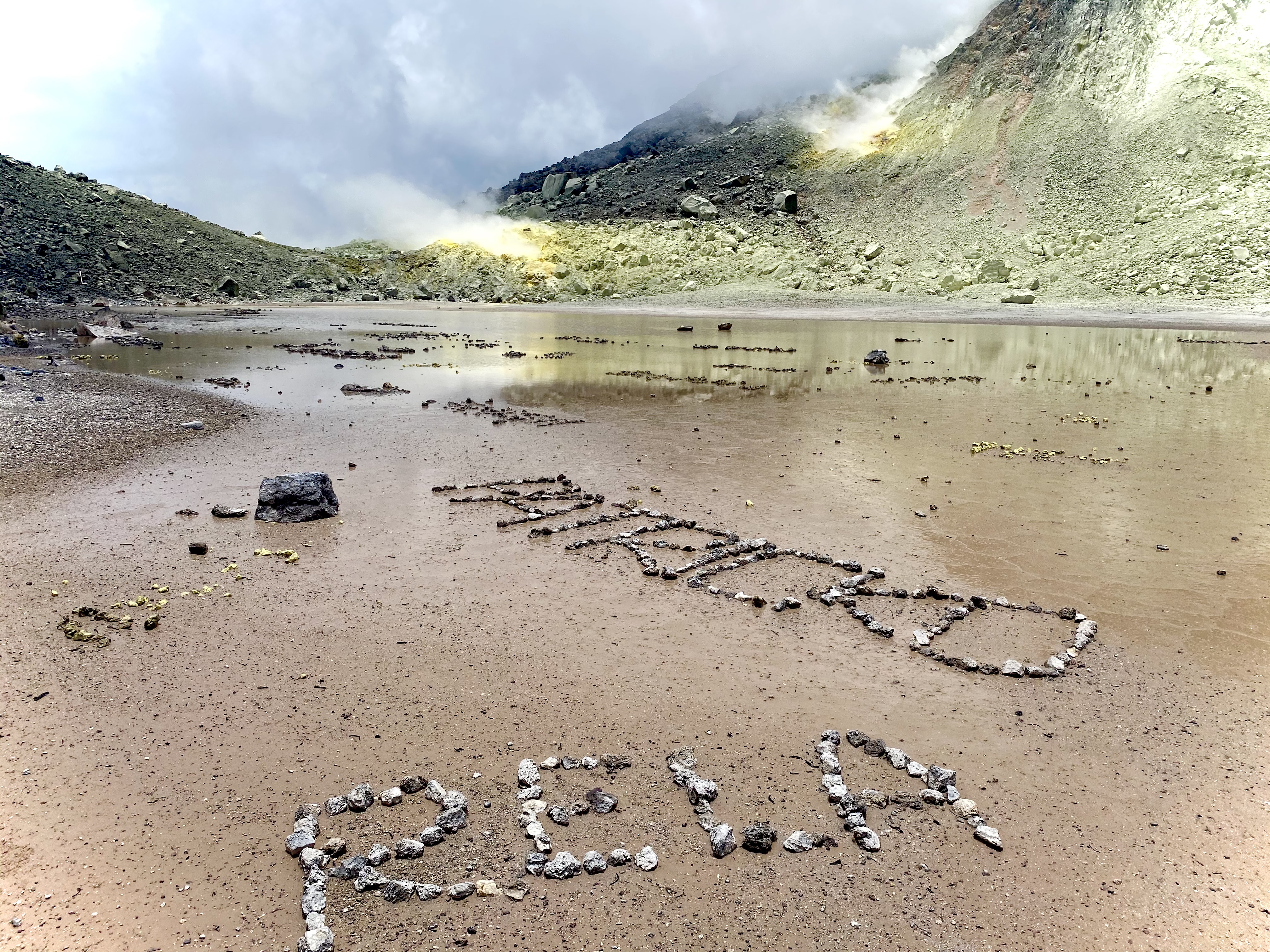 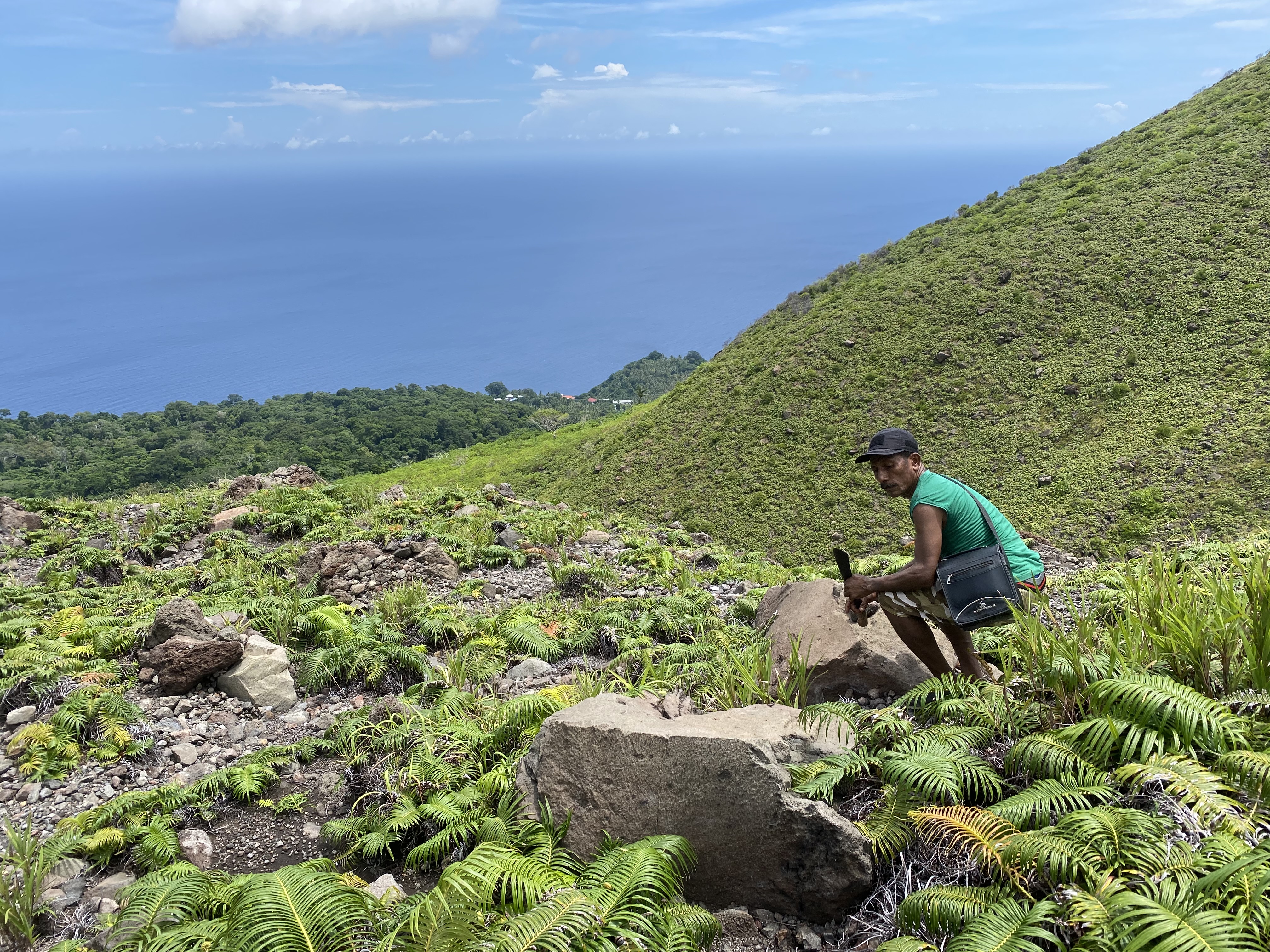 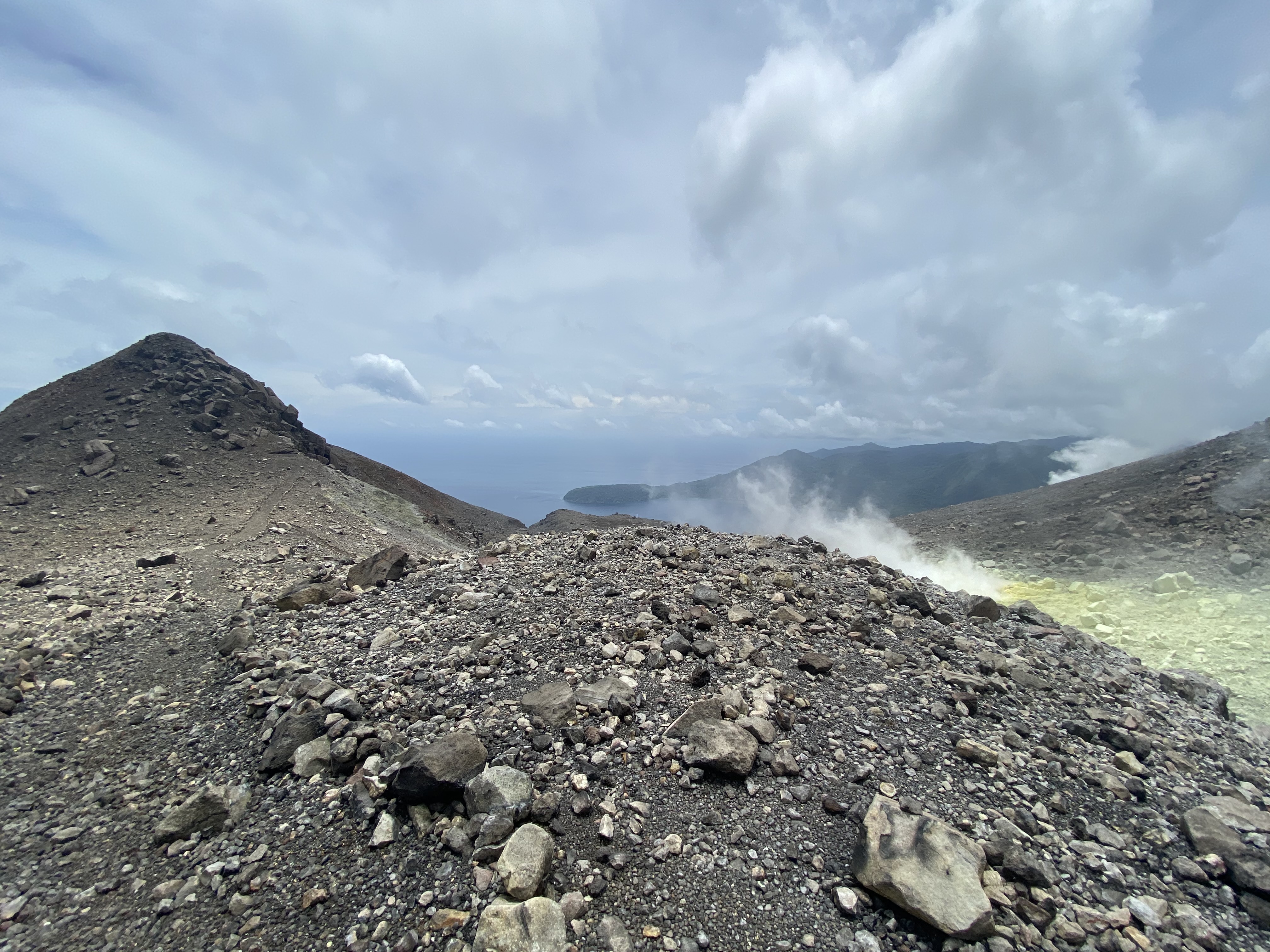 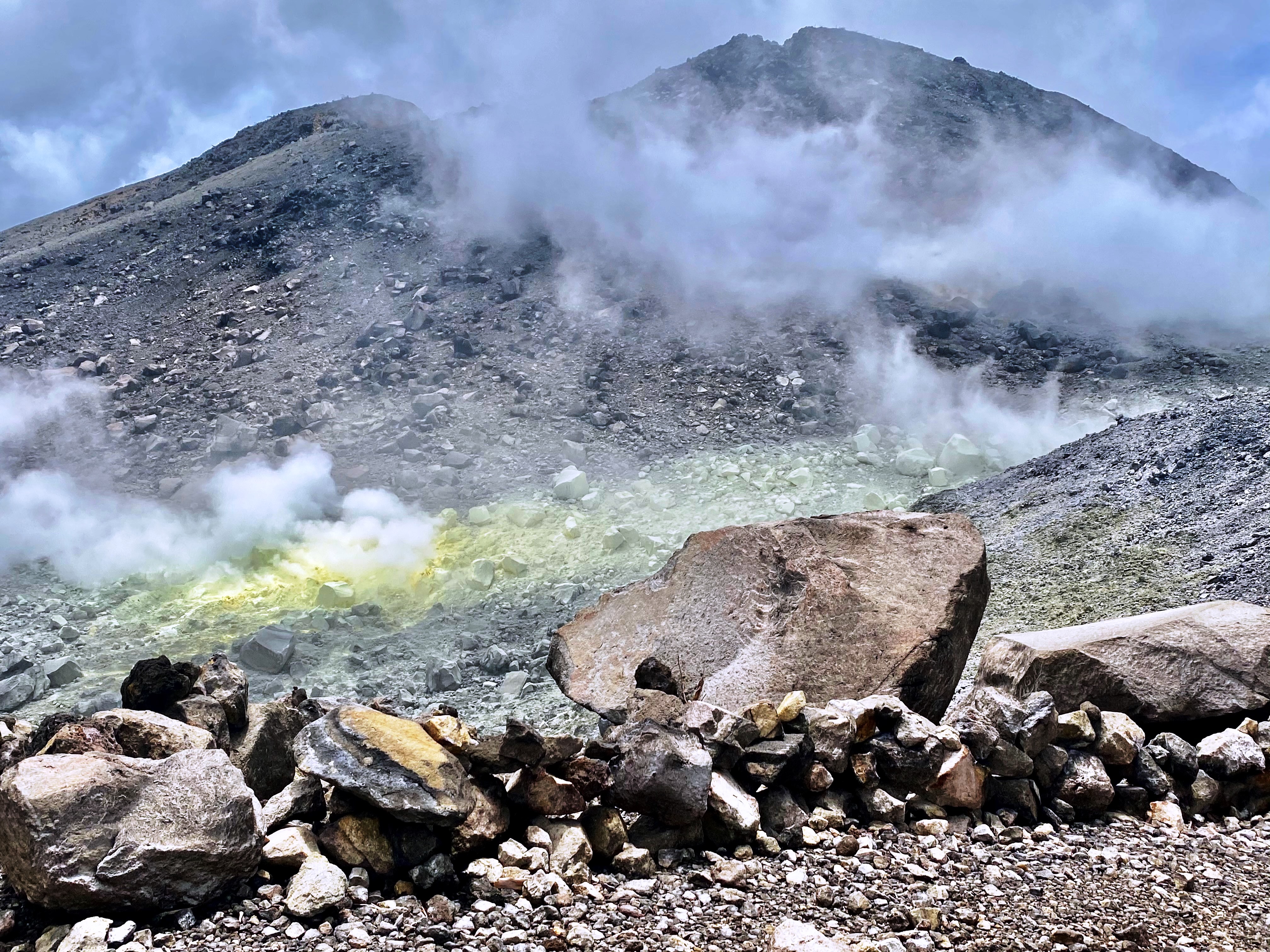 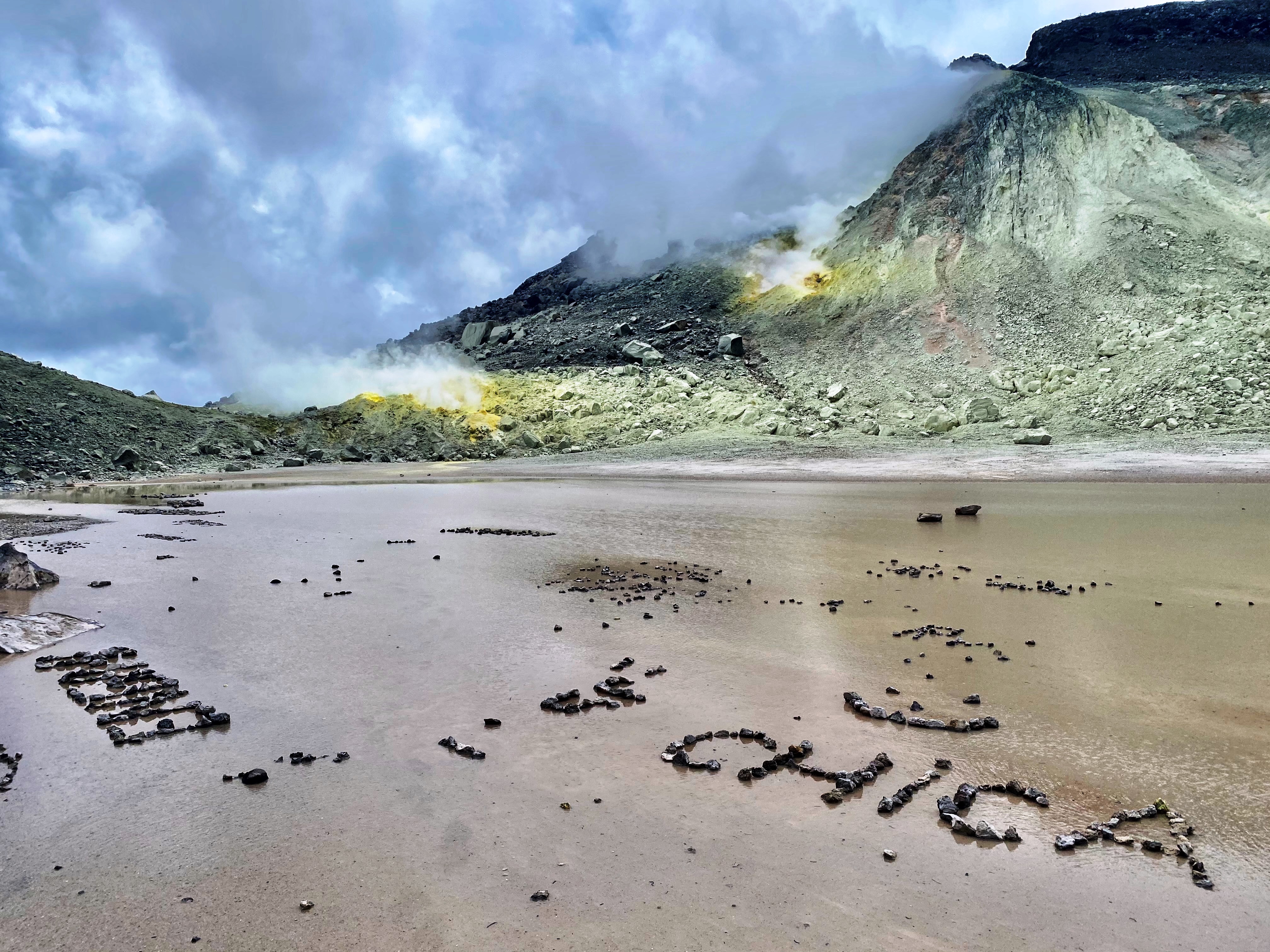 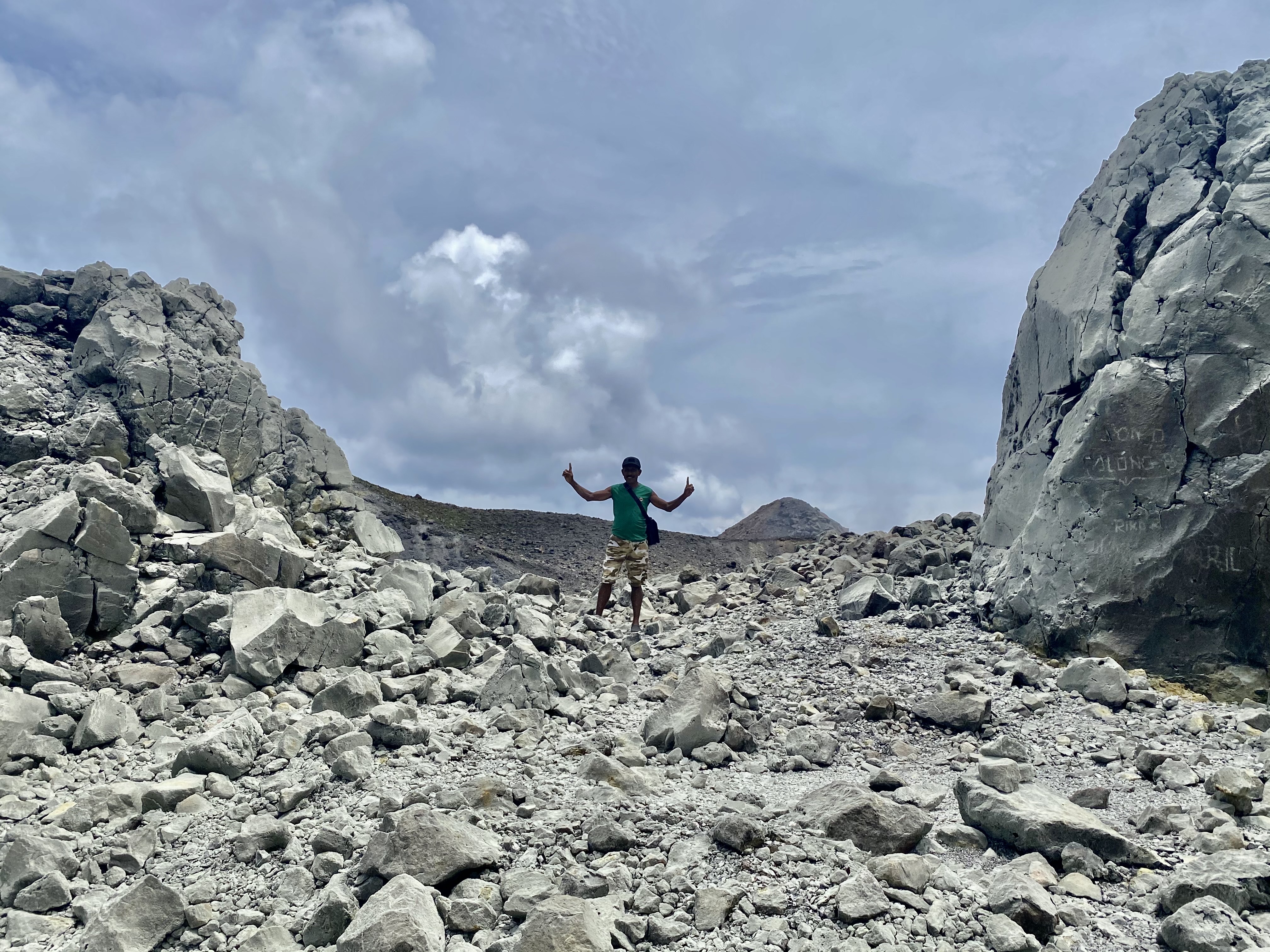 Pulau Damar (pronounced locally as “Damer”) is part of the Maluku Barat Daya (“MBD”) archipelago, often referred to as the “forgotten islands” of Indonesia. Damar is a seriously beautiful island dominated by the active volcano Wurlali, whose multiple peaks, dotted with fumaroles and streaked with yellow sulphur, rise above a green blanket of seemingly impenetrable jungle. It marks the geographical eastern boundary of Indonesia’s volcanic arc: from here the “Ring of Fire” veers north through the remote TNS islands and across the Banda Sea to Banda itself, and thence to the islands of Maluku Utara and beyond.

Wurlali can be climbed from either Wulur, the main port and administrative “capital”, or from Ilih village, nestled on the northeast coast between Wulur and the secondary port of Bebar, making a traverse of the mountain possible. I had met a guy from Ilih on the boat, who invited me to stay with him and his family, so I started and finished my trek from Ilih. There are no roads or land transport on Damar, so getting to Ilih involves taking a “Johnson” (fast boat with outboard motor) from Wulur or Bebar.

The track begins just past the church and winds through nutmeg and corn plantations before joining a (usually) dry river bed strewn with rough-shaped boulders that are very tiring to scramble over. There are snakes here, but my guide assured me they are harmless – although it didn’t feel that way to me: when I disturbed a baby one and bent down to take a closer look at it, it lunged at me with the speed and agility of a spitting cobra.

At around 400 metres the route emerges into a wide plain offering great views of the north coast. From here it is a hard slog up to the crater over loose ash and rock until you reach the crater plain at around 650 metres. This is an unearthly place: a flat, muddy plain surrounded by peaks and swirling sulphur fumes. I was told the locals sometimes come up here to play football, but frankly I find that hard to believe. Perhaps it happened once, long ago.

On the south side of the crater there is a lookout point rising to about 700 metres affording great views of the island capital Wulur. It made a good lunch spot, but owing to the swirling and unpredictable sulphur fumes it is not a place to linger.

As for bagging the summit, it was not clear to me – or my guide – which of the many surrounding peaks is the true summit. However, attempting to climb any one of them would, I think, be a foolhardy exercise. The peaks on the left are all but cut off by steep and dangerous-looking cliffs, and those on the right, although perhaps accessible, would involve traversing a ridge blanketed in highly toxic sulphur smoke. I would not recommend it.

The track continues on down to Wulur, or else you can retrace your steps to Ilih. Needless to say, the descent was even tougher than the ascent, and left me dreaming of ice-cold Coca Cola. Luckily there is a single warung in the village – run by a woman originally from Jakarta – that was happy to oblige.

Guide: My guide’s name was Jimmy Carter, and I recommend him. He agreed to act as a guide for anyone keen to climb Wurlali. Just ask for Jimmy in Ilih village.