Dola Koyakoya is the highest point of Alor island and is the last major peak in the island chain east of Java running all the way from Bali to Timor Leste (East Timor). It is home to a large number of deer and, like many of the highest hills from Lembata island eastwards, the higher slopes are incredibly scenic eucalyptus forest with plenty of distant views and reasonably easy walking.

Koyakoya is occasionally climbed, especially on August 17th by local hikers, and the traditional house at the trailhead in Tanglapui Timur has a guestbook and even a second traditional house or ‘lopo’ where hikers may stay a few minutes’ walk above the village and main road. The first time the trail was officially used by hikers was back in 2013. Look out on the main road from Kalabahi for signs for Kaipera and then Desa Kobra before the sign for Marten Modena’s Lopo Koya Koya on the left (767m).

Dola Koyakoya can be hiked in a single day if you set out early enough or stay close to the trailhead, but camping at Pos 5 is a good option too if you want the finest early morning views from the top. Allow around 4-5 hours up to Pos 5 where the trail splits to head towards two different peaks, 2 hours to explore the true summit (or just 1 hour if you prefer a slightly lower, closer and more popular viewpoint) and about 3 hours back down from Pos 5.

From the trailhead, the route follows a village track for a short distance before heading straight on along a narrower path to Lopo Koyakoya (818m). This is the traditional house where hikers can stay in normal times, though at the time of writing in May 2021, the building needs a bit of work after the recent Seroja storm which brought devastation to much of the Nusa Tenggara Timur province.

Behind the lopo, follow the cement water channel before veering left (857m) towards Pos 1 Kiatuka (862m), which is a stream that the trail crosses before entering bamboo forest and undergrowth. Here the sign reminds us to take care of our attitude and behaviour. The next landmark is a water tank (896m) before Pos 2 (952m) which in 2021 is not marked. It is thought to have been an ancestral burial spot. Beyond Pos 2 is a landslide area near a stream (980m) where the new path is steep and not always clear. Take care with route-finding and watch out for spiny plants.

Pos 3 Durangkila (1,186m) marks the beginning of a much better established path up a pleasant but occasionally very steep grassy ridge (1,216m). This is the spot where a sign commands us to ‘keep striving until the sheep become lions’! From here, the views are great back down to the valley where the trail started and also on the left up to the higher slopes of Koyakoya. It is also where you are likely to begin to see deer. The trail levels off for a while and is delightful walking when not in direct sunlight.

There is a sign at 1,341m for a water source on the right of the trail before Pos 4 Pernlu (1,337m) which according to the sign is regarded as a place of shelter. In previous times, this is where locals prepared deer meat after a hunt before descending to the villages. It should have taken you around 3 hours to reach this point. After a minor col, the trail starts to get much steeper and it can occasionally be quite frustrating with tiny stones in the grass making it easy to fall over.

There are a few more signs at this point, including one about edelweiss and another about taking memories home (1,591m). Finally the top of the ridge is reached. This is Pos 5 Tadakummang Kira (1,677m) and is the ideal spot to camp at. According to the sign, this is the war warriors’ treaty place, with local tribes agreeing to cease all fighting. There are a few small cairns here and the scenery is delightful. From here, you can see Puncak Trianggulasi on the left (north-west). You may even be able to see the cement pillar made by villagers at the top. On the Bakosurtanal map this peak is labelled Dola Potomana (1,759m) which is quite accidentally quite an apt name in Indonesian (photo where!) as it is a grand spot from which to take photographs.

From Pos 5 to Puncak Trianggulasi / Potomana is just 20 minutes but it is quite steep so do take care. There are various summit signs here next to the village-made cement pillar and it is clear that most hiking groups aim to get to this point rather than the true summit which is over 1.5km to the east. If you have time for both, our recommendation is to visit this spot first and then go to see out the true highest peak on the other side of Pos 5.

From Pos 5 heading north-east to the true summit of Koyakoya takes around 45 minutes (one way) and in clear weather it is fairly straightforward terrain despite few hikers visiting it. The last section is the hardest, with steep terrain and then a tiny little summit ridge with considerable drops on either side and crowned with cantigi shrubs and a summit sign erected by ‘anak bangsa’. The Bakosurtanal map gives an elevation of 1821m, and our GPS hovered around 1830-1833m. If anyone else gets a similar reading please let us know and we will officially increase the height by a few metres on the site.

Koyakoya can be seen clearly from Timor Leste’s Atauro island, and indeed from the higher slopes of Koyakoya the mainland of Timor Leste is visible, including the small nation’s highest peak Gunung Ramelau. These high ridges of Alor island are a great place to savour before descending back down to the village by the same route.

If you ask politely, the villagers may show you their traditional moko, an ancient metal drum that most Alor villages have, keep in the roofs of their traditional houses, and are used for dowry purposes. The local belief is that these objects are directly given by nature (‘alam’) but others suggest that they originate overseas from long, long ago. There is a museum in Kalabahi with detailed information and numerous examples. 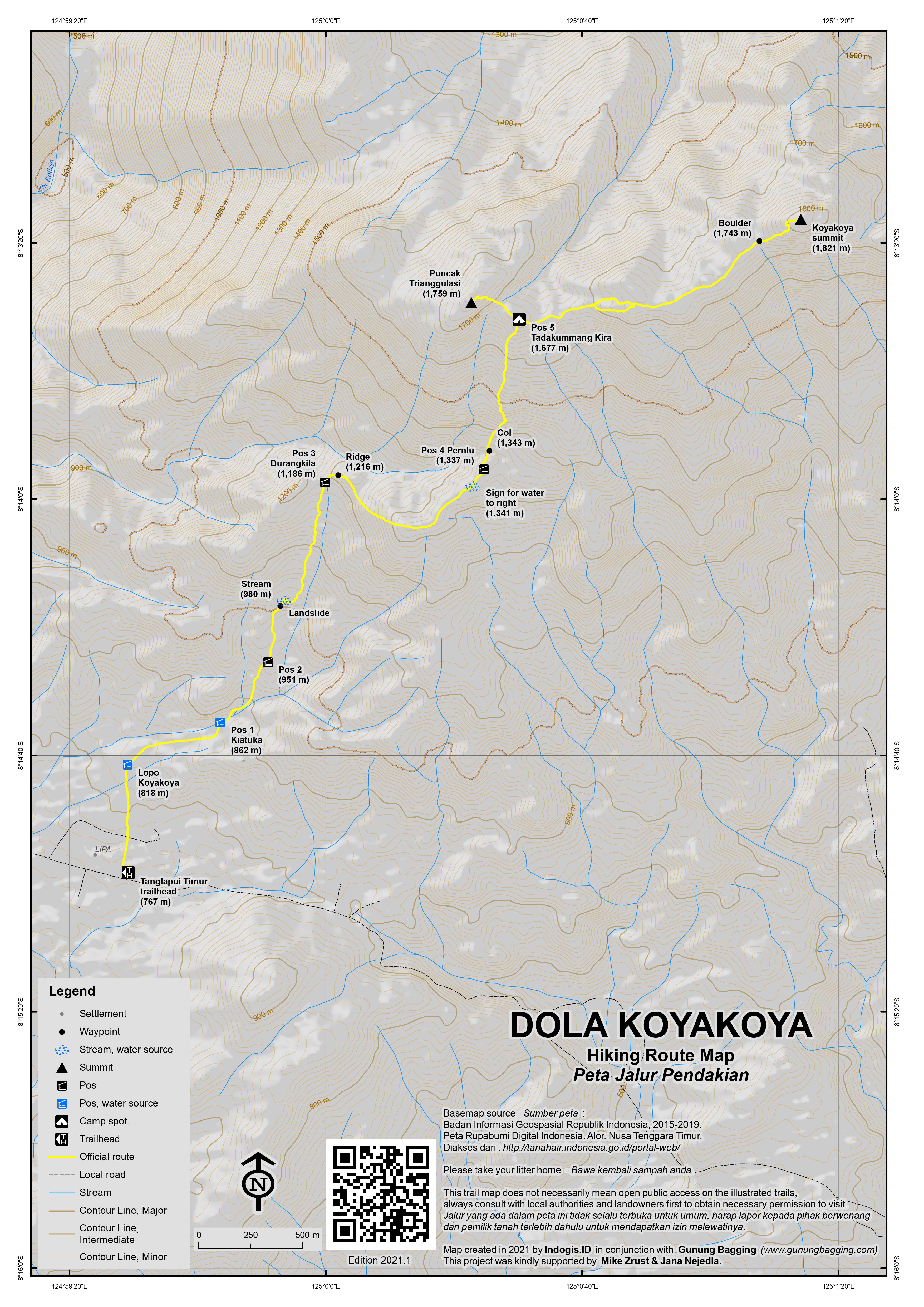