Mount Ramelau (the summit of which is known as ‘Tatamailau’) is the highest mountain range in Timor, and one of the most prominent peaks across the Indonesian archipelago. As with the whole of Timor Leste, the area has an interesting yet traumatic recent history. According to Trekking East Timor, “the Ramelau region was originally a huge eucalypt forest which the Timorese were frightened to enter. In 1927 the Portuguese organized people into the district to set up farms. Following their invasion of East Timor in 1975, the Indonesian military ordered the people to move to the areas near the town. As the forest was a Falantil stronghold the Indonesian military forced the people to clear it. Open fighting between Falantil and the Indonesian military continued up until 1984 when Falantil tactics changed to clandestine guerrilla operations.”

Thankfully this is all in the past, and the growing tourism here is an important source of income for the local communities. In actual fact, Ramelau is one of the easiest high mountains in this part of the world, as the village from which it is accessed, Hatobuilico, lies at almost 2,000m above sea level and the trail itself starts at over 2,200m. The super fit can march to the summit in 90 minutes but for the rest of us it takes between 2 and 3 hours to reach the peak, which is crowned with a statue of the Virgin Mary and a few memorials. As per usual, the best chance for clear views in all directions is at first light so most hikers wake at 2.30am or 3am in Hatobuilico and get hiking at around 3.30/4.00am in order to reach the top for sunrise.

Public transport to Hatobuilico is unreliable and time-consuming. You can actually just about do the hike for dawn in 24 hours return from Dili (4WD car hire with driver is 90 USD plus fuel) but this is really rushing things and so the best option is a day and a half car rental (or motorbike from Tiger Fuel for 35 USD if you prefer) leaving Dili in the morning of Day 1, having lunch and exploring the beautiful Pousada in Maubisse (1,400m) and buying drinking water and snacks for the hike, a few hours of rest in Hatubuilico Guesthouse (also known as the Pousada Guesthouse) before the climb and then returning to Dili by mid-afternoon on Day 2.

From Dili to Maubisse takes about 3 hours and a further 2 hours from Maubisse to Hatubuilico along bumpy, rocky tracks through some absolutely stunning views of hills, crags and traditional Timor houses. The junction for Hatubuilico is 10km beyond Maubisse, and is a well-signposted right turn. From this junction it is a further 18km to Hatubuilico. For those with more time and less cash, cramped local buses do run up to Maubisse and beyond but there is nothing like a regular timetable and you would have to get lucky hitching a ride on a rare farm truck from the junction to Hatubuilico for the final 18km or else consider spending several hours hiking in.

The Pousada Guesthouse (1,920m) in Hatubuilico is on the left side of the road, opposite a Virgin Mary religious alcove and overlooking the school and sports field behind which are some other hills worth exploring. The guesthouse is run by Alexandre Araujo, his wife Adelaide Barroi and their children. Alexandre speaks several languages including English and Indonesian. Hatobuilico appears to be in a bowl, nestled with high hills on all sides. Ramelau itself can be seen from just 100m further along the track outside the guesthouse. The panorama from the lounge area is quite delightful and there is a wealth of English language information on local treks (and what appear to be colour photocopies of old Indonesian Bakosurtanal maps of the major ranges in East Timor downstairs). However, be warned that electricity is intermittent here and may only come on at around 6.30pm. Your food may take a little while longer.

In January 2014, prices per person were 15 USD for accommodation plus a basic evening meal and breakfast. The guesthouse looks as though it could easily sleep 15 or 20 people. Guides can easily be found – indeed it happens automatically – and if you have a group of 3 or more (or hikers with different levels of fitness) we recommend you take 2 guides – one to lead and one to stay behind. The trail is not demanding and is, for the most part, easy to follow. However, hiking at night can be tough (remember a torch!) and there are a couple of junctions where you could take a wrong turn. Prices for guides seem to be unclear, but you shouldn’t have to give each guide more than about 15 or 20 USD. Note that is this guesthouse is full there are a couple of others in the village.

The following morning, your driver should be ready to take you and your guide(s) to the starting point which takes about 20-30 minutes to drive to from the guesthouse. You may need to get out at one point to open a traditional wooden gate across the road and there may be a landslip area (2,230m) just a couple of hundred metres before the entrance. Visitors are requested to sign in the book, but in reality this happens on your return. The entrance (2,260m) is rather grand, with a huge stone monument with quotes from, amongst others, Nelson Mandela. There are also a couple of shelters where you can charge your phone (!) as there are a number of solar panels nearby.

The first part of the hike is, if anything, a little too unnatural, with large stone steps and occasional railings leading the way up the hillside. Thankfully these do not lead all the way to the summit and before long you reach a junction (2,480m) where you must stay left. The stars should be glittering above you. Two small streams are crossed (at 2,550m and 2,565m) and represent the last place for emergency drinking water.

A further 45 minutes and you will reach a flatter section of trail to the right of which is a traditional outdoor church (2,780m) complete with rows of wooden seats for the congregation. The trail steepens after this point, passing a telecommunications mast (2,915m) before bending round to the right, up 10 or so steps to a statue of the Virgin Mary, a cement summit pillar and numerous memorials and probably a few flowers left by local people. Be careful you do not fall over the left side as it is a vertical drop of several hundred metres. Daisies grow on the few steps coming up from the other side of the summit.

As the sky lightens, you will be able to make out the south coast of the island of Timor, the ocean beyond, and a couple of wide rivers meandering their way down to it. On the left, to the northeast, is the Matebean (or ‘Matebian’) mountain range – the other significant hike in Timor Leste. To the west, in the distance, are the hills of Indonesian West Timor. To the north, as the sky continues to lighten, is Atauro island, a popular diving destination located some 25km north of Dili, the peak of which is the lushly vegetated Mount Manucoco (999m). All in all, in decent weather, dawn at the top of Timor is one of the finest views in this part of the world – and all for such an easy hike! The effort to reward ratio of Ramelau cannot be beaten!

Most hikers simply return the same way, but for those with extra time there is a trail down the other side of the mountain to the town of Ainaro from where public transport is available. If you wish to see this lesser-visited side of the mountain, be sure to tell your guides the night before so they can prepare accordingly.

For those returning the same way, you’ll have fun seeing the places you trekked through in the dark with your torch. In the early morning light there are some stunning views to be had as you descend back past the traditional church and down through the woodland to the steps and the entrance. Given that you may be taking quite a lot of photographs on your way down, it could well take a similar amount of time to descend as it did to ascend. Once down at the entrance, a local chap may well ask you to write your names in the guestbook. And then it’s back to the guesthouse for a coffee and a wash before the long ride back to Maubisse and Dili. 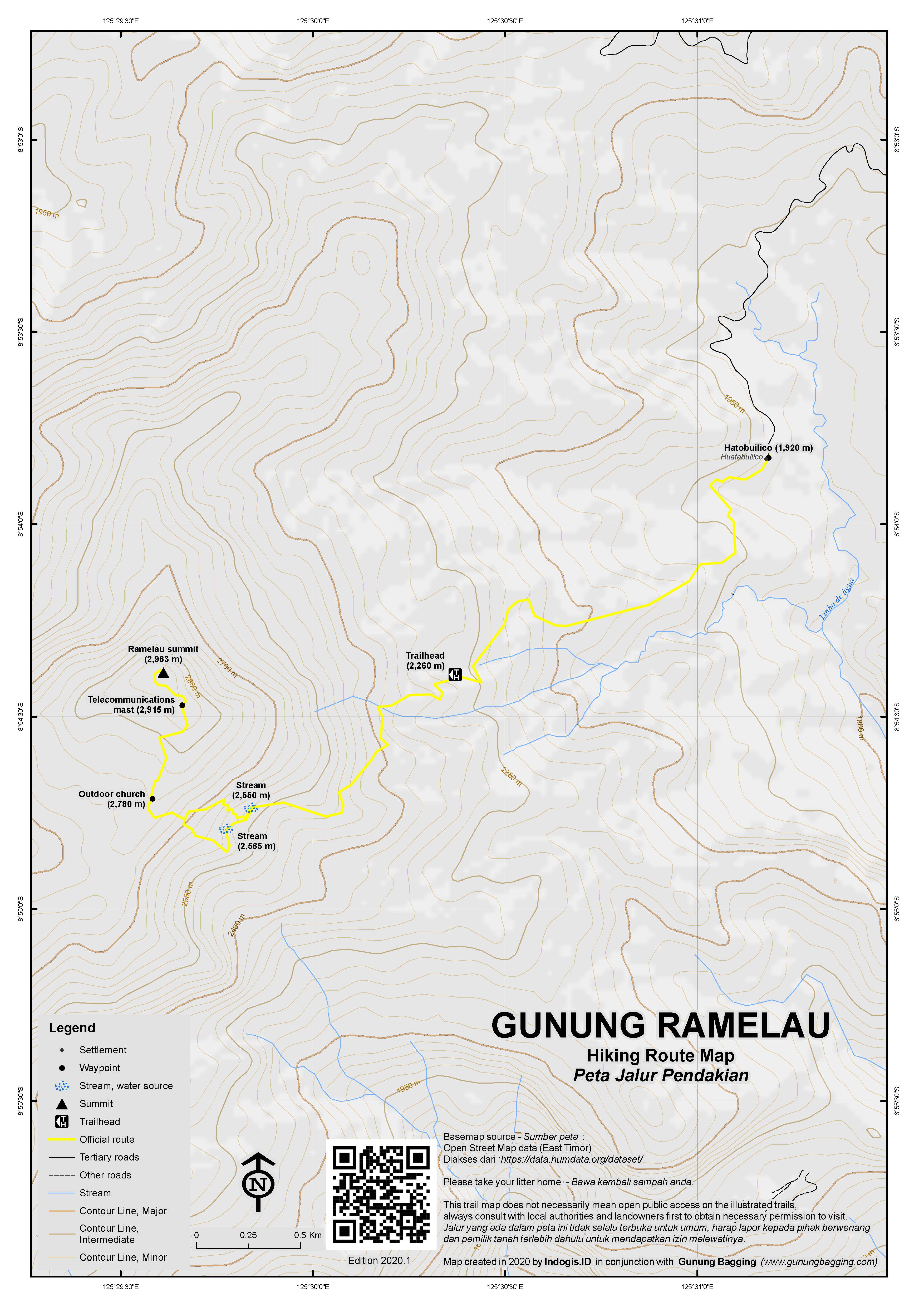 The name “Tatamailau” is of Mambai origin, the local language, and means “Grandfather of all”. (Wikipedia, 2011)