Gunung Mbeliling is the westernmost significant mountain on the island of Flores. Probably because of its proximity to Labuan Bajo – where many tourists stay before or after visiting Komodo island – a Mbeliling hike has in recent years become part of the ecotourism options available to visitors to West Flores and has featured prominently in tourism literature for the area.

It is actually located just a few kilometres to the north of the ancient 3-kilometre wide Wai Sano caldera which contains Sano Nggoang crater lake, the largest in Flores. There are apparently two solfataras on the south-eastern shore of the lake. Gunung Mbeliling is not an active volcano but rather a cool and shady forest ridge popular with birdwatchers.

Back in 2013, there were promotional signs for Mbeliling by the side of the road and at the airport and, during the high season, foreign tourists climbed it on a fairly regular basis from the village of Roe, which is one hour from Labuan Bajo.

Roe is at about 600 metres above sea level, so it’s not much of a significant climb to the top of Mbeliling for those who are accustomed to hiking in Indonesia. The recommended trek includes one night camping at or near the top and a visit the following day to Cunca Rami waterfall. If you have the time, the sunset and sunrise are very nice indeed, but the hike can easily be done in a single day trip or even as a half-day outing if you prefer.

Fast forward to 2020, and Roe is no longer the starting point of choice, although the hike remains possible from there. Now, Dusun Cecer, Liang Ndara is the recommended trailhead, with friendly and informative guides who are also happy to show you around the plantations and tell you about the unique culture of the area. There is even a homestay if you fancy a simple night in a village in the hills.

Dusun Cecer has another advantage over Roe which is that it is slightly closer to Labuan Bajo, requiring just 40 minutes to get there. At 620 metres above sea level, the hamlet has great views to the coast and apparently you can even sometimes see Sangeang Api volcano island in the distance in clear weather.

From the village, the paved track leads through pineapple and coffee plantations before reaching a wooden hut at the edge of the forest (690m). Soon after entering the forest you will see a black water pipe and shortly afterwards a narrow stream (733m). This is the only reliable water source on the trail but be careful as you cross it as the gully is quite deep. Also watch out for leeches are they are quite common in the Mbeliling rainforest.

The trail at this point is quite vague and thus a guide is pretty essential. The terrain becomes steeper with big boulders (826m) before a narrow ridge (842m) is reached with a pleasant small rock to rest on. From here the trail follows the ridge roughly southwards and at an elevation of around 900 metres there are some great views back down to the village and further away to the coast and the islands off the coast of western Flores.

The trail continues to follow the forest ridge until the vegetation changes and becomes more dense and then suddenly you find yourself at a grassy, open area with no signs but great views in clear weather. To the west you can look towards Labuan Bajo, the airport runway, and the Komodo islands. It should have taken fit hikers no more than 2 or 2.5 hours to get here from Dusun Cecer.

The Bakosurtanal map labels the peak “Golo Beliling” with an elevation of 1,266m, with a second 1,251m spot height for a point just a couple of hundred metres to the north-east. Based on GPS readings, these figures are slightly under the true elevation. First of all, this grassy, open area is the true summit with an approximate elevation of around 1,275m. It is also the best place for camping to enjoy the sunset or sunrise views if you have opted for a two-day trek.

The view south is also especially good, with Sano Nggoang lake often partially visible and a significant peak behind it. Indeed, the highest peak in this far western end of Flores is actually about ten kilometres south of Gunung Mbeliling and labelled Poco Sesok (1,335m) on the map, supposedly also known as Gunung Cerak, which is just to the south-east of Sano Nggoang lake. There is virtually no information on Poco Sesok available online, so it is unlikely there is a trail to the summit at present. However it has around 925 metres of topographic prominence so is likely to be a pretty good mountain to explore in its own right.

What of the second peak on the Bakosurtanal map? Well, if you continue to follow the trail from the true summit of Gunung Mbeliling as it drops down via a small muddy pool before ascending again, you will in just 15 minutes be at the slightly lower north-eastern peak. According to GPS this peak is around 1,262m above sea level.

This lesser peak is well worth a visit as the old Dutch-era triangulation pillar is here, labelled P27. Apparently views to the east at sunrise are great from here. Beyond this secondary peak, a currently less well-used trail continues down to Roe.

Back to the true summit and camping spot takes a similar amount of time and after enjoying a bit of cooler air you can be back down in Dusun Cecer in just 2 hours or so, meaning a round trip of around 5-6 hours so roughly 7-8 hours in total including travel time from and back to Labuan Bajo. 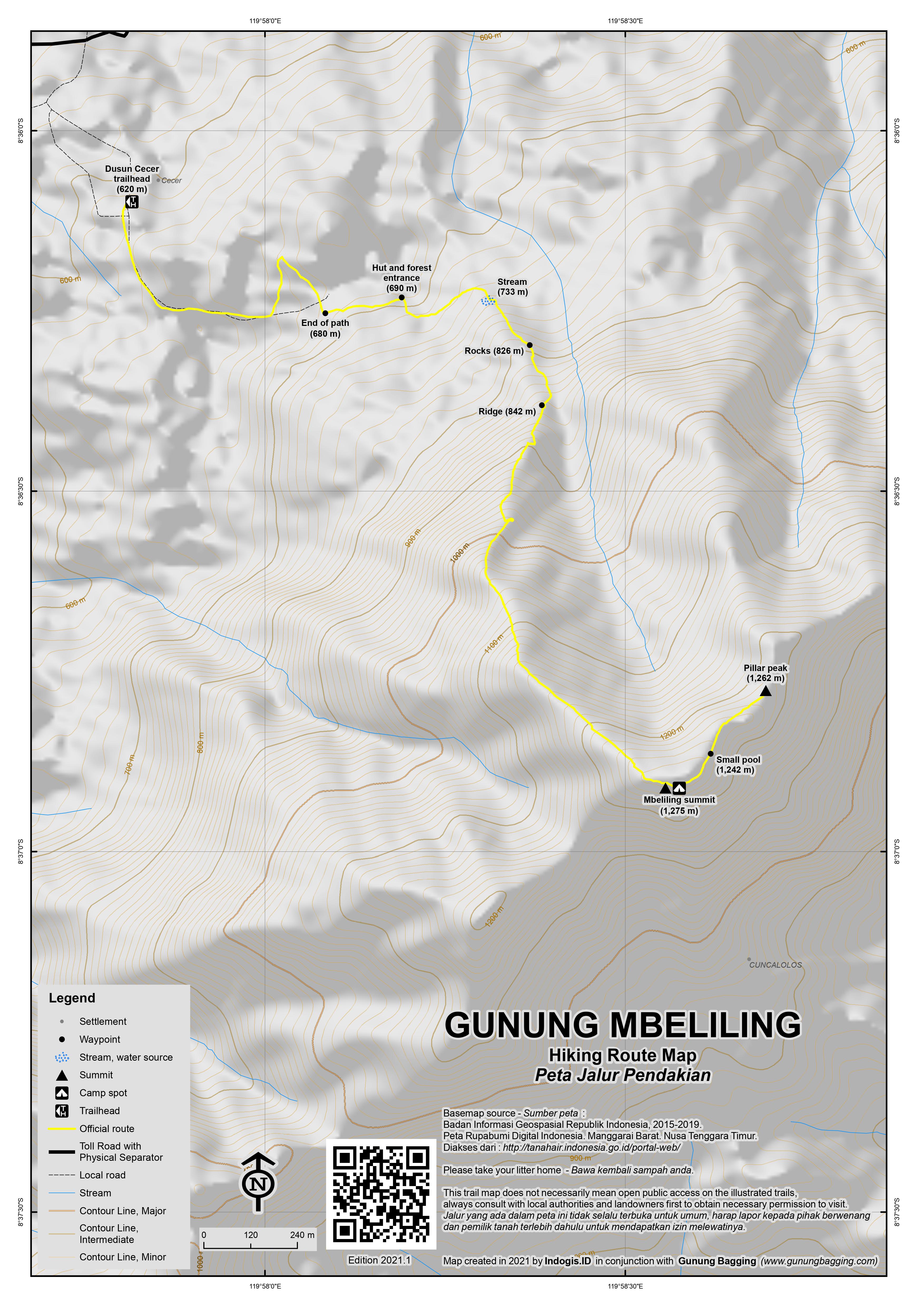 ‘A place to seek protection’ from Mbau (place) and iling (shady).