The Matebean (also spelt ‘Matebian’) massif is one of the wildest and most rugged mountain ranges on the island of Timor, and has a fascinating yet bloody recent history. It has two summits – Mane (the ‘male’ – 2,372 m – true summit) and Feto (the ‘female’ – 1,963 m). The more southerly Mane is the higher of the two. Although Matebean Mane is not the highest mountain in Timor Leste, it is one of the most impressive in the remoter parts of the Eastern Islands of the archipelago.

A climb to the summit of Matebean Mate can be made easily in one day – subject to the weather. Likewise, Matebean Feto can be climbed in one day – both from Uaiboro. Both peaks can be done in three days with camping on the mountain. The best months for climbing in Timor Leste are August through October when cloud cover on mountains is minimal. (The southern side of Timor receives higher rainfall than the north, and the south-facing mountains attract cloud cover even in the dry season.) In fact, guides may refuse to take trekkers up the mountain if the cloud cover is too low and rain is forecast. The route up the mountain is crisscrossed by numerous tracks leading to gardens, and cloud cover presents a challenge – a guide is essential.

Matebean literally mean “Spirits of the Dead” (mate –‘ death’, bean – ‘spirit’.) It is an important and special place to the people of Timor as this is where the spirits of the deceased reside. Climbers are requested to speak quietly and show respect for this most sacred place. Folklore holds that only the souls of the good go to Matebean.

During the Indonesian occupation from 1975, the mountain was a guerrilla hideout where many people sought refuge from the military in caves on the mountain. (Extract from Trekking East Timor). “During 1977–78 many people died in this area in battles with the Indonesian military. Aircraft came from Kupang bombing and strafing throughout the morning. At lunchtime the aircraft would land at Baucau, and the attack would resume in the afternoon. There was also navel shelling from the south coast. There are many bomb craters. The track passes over caves inside of which are the bodies of Timorese killed by the Indonesian bombing. Large rocks have been jammed down to close the entries.” Villagers informed us of one cave in which some 200 people were trapped due to the bombing and had died inside. Many people also died from famine as they were unable to tend their gardens.

Gunung Matebean is reached from Bacau via Laga (about 18 km) on the north coast and then south-east to Baguia (alt: about 450 m) another 43 km. The Laga-Baguia road was asphalted during the Indonesian occupation but has now falling into disrepair and is extremely rough. The trip takes the best part of 5-6 hours by car. There is limited public transport from the Baucau bus terminal to Baguia – enquire in advance about busses. Trucks with tarpaulin are irregular but possible for those with time on their hands.

An impressive ruined building, in classic Portuguese style, ‘Escola do Reino de Haudere’, lies on the right hand side of the road (now known as ‘the old school road’) at Hiberi about 2-3 km before Baguia. This was originally a Portuguese school built in the early 1900s but destroyed in the 1940s during the Japanese occupation.

The people in the Baguia area are Macasae and Nauoti; most speak some Indonesian. We were able to communicate with most people in Timor Leste in Indonesian, learnt during the Indonesian occupation and now from Indonesian TV. Few people outside the main towns now speak Portuguese although, we understand, that it is being introduced into schools as the national language (why?). English is also being taught. We were pleasantly surprised to meet some high school students in Baguia who were fluent in English – perhaps they have an excellent teacher!

Accommodation in Baguia is limited. Guest House Rabilai (+670 7737 6137, 7620 2770), run by Sr. Martino and his wife Sra. Adelaide, offers basic but quite adequate accommodation and meals; six rooms (with small double beds), two of which have attached bathrooms ($15-20 per room). Another building is currently under construction. The rest of our group stayed in a similar guest house below the Pousada. Just recently, the government has renovated an old Portuguese fort and opened the Pousada Baguia as a guest house to promote tourism. This looks a bit more ‘up-market’ compared with the guesthouses although not as ‘homely’. (Pousada: Portuguese, originally hilltop fortresses, now often renovated as hotels, as is being done in Timor Leste.) This was the district administrative centre where in 1959 the last uprising against the Portuguese colonizers took place with bloody reprisals against the Timorese.

Baguia is the last place to get basic supplies such as snacks and water. The climb starts at Uaiboro (pronounced ‘whey-bore-oh’) and follows the blue line on the Indonesian topographical map (see photo). The road from Baguia to Uaiboro is via Ossohuna (alt: about 800 m). The section, Baguia – Ossohuna (about 7 kms), is passable by 4WD vehicles and motorbikes. The road to Uaiboro branches off to the right just before Ossohuna. Even 4WD currently cannot pass the Ossohuna – Uaiboro section (motorbikes can, but probably quicker to walk as the road is steep). We walked this section, about 2 km, 250 m vert., about 30 mins. At Uaiboro (about 1,235 m), we registered our names in a log book at the house of the community leader Martino de Silva and paid an ‘entrance fee’ of $20 for the group. (They also offered us coffee after our descent, which was most welcome.) Guides are available at Uaiboro ($25 per guide); but it is advisable to make arrangements in advance through the guest house or police station in Baguia for guides.

The trek was less demanding than we had expected. In fact, as the blue line on the map indicates, the trail traverses the steep slopes diagonally making for a more gently ascent. It passes initially through gardens and cow pastures on steep slopes then through Eucalyptus groves at about 1,900 m with thick grasses below. Interesting fluted, karst limestone outcrops are passed on the way.

At about 1,500 m we passed into the cloud zone with visibility reduced to about 20-30 m. Guides are essential if for no other reason than to avoid becoming lost in ‘white outs’. After about 3:30 hrs from Uaiboro and at about 2,160 m, there is a small, dilapidated ‘capella’ (chapel) where the villagers pray each October (and in which cattle take shelter turning the ground into a quagmire of mud and manure!)

At this point the trail to the summit (another 220 m vertical, about one hr) becomes somewhat steeper with some big rocks to scramble up. Since we were in heavy cloud, we adopted the Wolf Pack formation of a ‘wise old (slower) wolf’ in front, women and children in the middle and the fit young guys at the back. This worked well keeping the group together and in close contact with the guides. The total ascent from Uaiboro to the summit, about 4.5 km, took about 4.5 hrs including breaks. Our group included a 9 ½ year-old boy who had no problems with the trek although he did need a hand up on some of the bigger rocks.

The summit is jumble of large, monolithic karst limestone rocks. And on the highest point is a small, elegant stature of Christ. On this occasion, given the heavy cloud, we missed out on the spectacular views across the island – from the north to the south coasts. “The views are truly stunning with a feeling of being on the top of the world. On a clear day Tasi Feto (feto female) = northern sea, and Tasi Mane (mane male rough = southern sea) are clearly visible.” (Trekking East Timor)

Our descent by the same route was, in fact, more difficult than the ascent. The limestone rocks, when wet, are extremely slippery causing some people to fall onto their backsides. In these conditions, allow more time for the descent. Otherwise, the descent may take only about 3-3.5 hrs.

The mountain can also be climbed from the north-west at Quelicai (720m) but this is a much less popular approach. 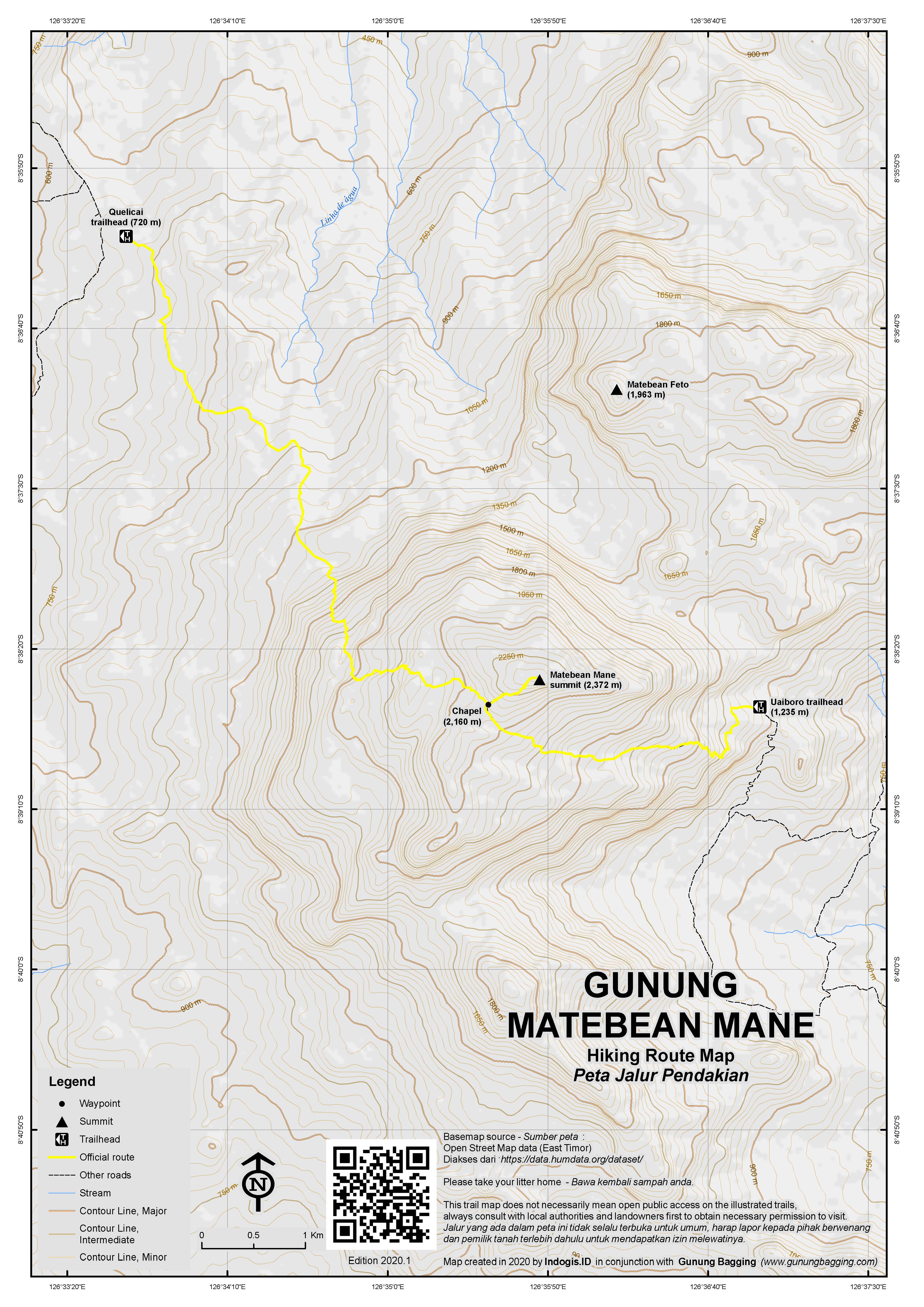