This Ribu is the most active volcano in Sumatra and is one of the most popular hikes in Indonesia. It is located to the south-east of the town of Bukittinggi and is easily reached from the main road south of the town. There are many places on Bukittinggi’s main tourist street – Jalan A Yani – where you can arrange a guide but be sure to haggle to prevent paying over the odds for what is a fairly straightforward hike, albeit onto a highly active volcano. The best thing to do is to climb at night so you reach the crater area for sunrise. The view from the Marapi crater area is staggering – as good as that from Gunung Kerinci, Sumatra’s highest peak. Most tour guides will suggest you set off at midnight or before. However, if you are a strong hiker it will not take you more than 4 hours to reach the crater so unless you want to freeze at the top waiting for the sun to appear it is better to start at 1 or 1.30am.

Unfortunately – and despite what 99% of local people will tell you – the highest point of the Marapi mountain range is very rarely visited and requires several hours extra in each direction. The true peak (2,891m) – known as Puncak Garuda to many student hikers and Marapi Tuo (‘old Marapi’) to some locals – lies in dense forest to the east. After receiving some advice from one of the few hikers who had previously reached the true summit, Gunung Bagging went with Ojat of Komunitas Pendaki Gunung Balad Soekarno in June 2013 to attempt to reach the top from the usual crater approach from Kotobaru. It was a success, as you will read below!

Back in 2003, a new, longer, path from the north to the true summit was opened – in an expedition which took 9 days – but it is nowhere near as popular as the route from the west as you miss the most interesting part of the mountain which is the crater complex. It starts in the village of Kacawali (1,400m) and parts of the trail are incredibly steep and demanding. It was opened by hikers from MAPALA UNAND (Andalas University Limau Manis Padang).

Apparently the steep path from Kacawali is at 80 degree angles in places and it takes a minimum of eight hours to reach the top which requires at least one night on the mountain. There are two water sources at 1,400m (the starting point) and 2,500m. The first section is through bamboo vegetation and the difficult section begins at approximately 2,000m. There are spectacular views of a 500m high waterall at 2,400m. Very few people have hiked this way and several have become lost. Most local people actually consider the area to be haunted.

Inevitably, most people are happy enough with reaching Puncak Merpati (2,757m) which is the highest peak in the crater complex. From Koto Baru, head up Jalan Tantawi (with the signpost “Batu Palano”) and take the immediate right turn. A telecommunications mast (1,320m) lies 3kms further along this road and the trail to the crater begins on a farm track next to some wooden huts where you should register. The trail leads up a track through farmland (chilies, tomatoes etc.), and past  a small, green building (Pos BKSDA, 1,480m) where local students often camp at weekends (there are even basic toilet facilities). The trail then goes over a bamboo footbridge (1,490m) which is basically just a load of giant bamboo stems. As per usual, this beginning section is the area which you are most likely to get lost, due to the various different farm tracks.

There are many signs – often yellow – for both camping areas and water sources on the lower section of the trail. The first water source is Sumur Kodok (1,500m) which is a little pool of water to the left of the track. Then follow many flat camping grounds (‘Pasangrahan’ – 1,505m) before Jauhi Maksiat (1,540m) and another clean water source signposted at 1,575m. The second of two small metal shelters is at 1,600m. Because of its popularity the trail is very well defined and you will probably meet other hikers enroute. Yet another water source is signposted at 1,645m before the Petualang Gunung camping ground at 1,710m. After this, you find yourself on a rather pleasant ridge. Listen out for siamangs you may be lucky. The Atas Paninjauhan sign follows at 2,203m.

As the trail leads higher up the mountain, the vegetation becomes less dense and there are some excellent views over the Agam valley to Mount Singgalang and the town of Bukittinggi. The vegetation ends at approximately 2,400m (‘Pintu Angin’) where there are many camping spots. The path then briefly drops down to what looks to be an old  dry river bed, before zig-zagging up the steep rocky slop of the volcano. When you reach the edge of the crater area, you should see a small white monument on your left at 2,683m. This is known as Tugu Abel Tasman, named after a man who died here in a 1996 eruption. Sadly, it has been somewhat vandalised recently.

From here it is a short 30 minute stroll across both sandy and rocky volcanic plains to the ‘summit’ of Puncak Merpati (2,757m). By now, the sun should be appearing and you should be able to see nearby Singgalang mountain to the west, Talakmau beyond Bukittinggi to the north and Lake Singkarak and Kerinci to the south. There are numerous volcanic features here – from deep smoking pits to rather peaceful looking rocky craters. It’s a bit like walking across a block of Swiss Cheese! Avoid sulphurous gas as it blows over the rims of the more active craters.

You should be able to see the true forested peak of Marapi (‘Puncak Garuda’) lying some 130 metres higher and 1.5 kilometres to the north-east. A peak really worth visiting is on the edge of the vegetated area, beyond the crater complex. It is easily recognizable because there are half-burnt trees and pleasant vegetation on its slopes. We have called it Puncak Terbakar (‘burnt peak’ due to the burnt trees near the top) (2,735m) and is perhaps the finest easily-accessible viewpoint here – especially of Danau Singkarak.

Strong hikers will have reached Puncak Terbakar in 5 hours or less from the trailhead. From Terbakar, most hikers are content to return the same way rather than continue to the rarely-visited true summit (Puncak Garuda). However, depending on how recently a hiking group has visited it, it is actually feasible in a regular weekend (i.e one night camping) for those who are keen to bag the highest point. In June 2013, it took Gunung Bagging just under 3 hours extra from Puncak Terbakar to Puncak Garuda (and about 2 hours to return to Puncak Terbakar the following morning) as luckily a local hiking club (Mapala Pagaruyung) had been there just a few days before and so the trail, whilst by no means being straightforward, was significantly easier to follow than had the other group not been to the true peak so recently.

It is the first section of ‘trail’ after Puncak Terbakar where you are most likely to struggle to find the correct way. You need to drop down a bit to the right through an area where lots of Edelweiss grows (Taman Edelweiss, 2,669m) before hopefully finding some coloured string attached to a the branches of trees and bushes every so often. Because of the density of the vegetation, the views are rather limited in most directions although on the higher slopes you may catch a glimpse of the active craters below in good weather.

After enjoying the pleasant obstruction-free stroll across the craters earlier, most hikers will likely be horrified by the density of 3-metre high bracken which requires one to get down and crawl on all fours at certain tricky sections. Tall hikers or those with big rucksacks (i.e carrying tents) will be particularly annoyed by this. Don’t leave anything on the outside pockets of your bag or it will probably just get ripped off or be completely muddied. After an hour or so of truly unpleasant hiking, the trail becomes slightly clearer, with logs to clamber over instead of dense bracken. There is a small spot which , although far from ideal, can accommodate two small tents (2,794m) about 500 metres away from Puncak Garuda. However, those with energy and daylight on their side are encouraged to continue for another 45 minutes to the summit which is by far the flattest and clearest area on this side of the mountain range.

The summit itself is crowned with a few metal signs nailed to the taller trees by Mapala Pagaruyung (in 2013) but there are no decent views to be had here and the rumours of an old triangulation pillar (hence being known as Puncak Triangulasi to some hikers from Padang) appear to be unfounded. If there was a pillar here it is either hidden in the dense vegetation or long since crumbled. Let us know if you spot it! If you are interested enough to attempt to reach this obscure top, we definitely recommend hiking via the route from the crater rather than from Kacawali on the other side. This is especially the case at the moment as the trail is marked with bits of pink and green plastic and is likely to be the least overgrown it has been for a long time. 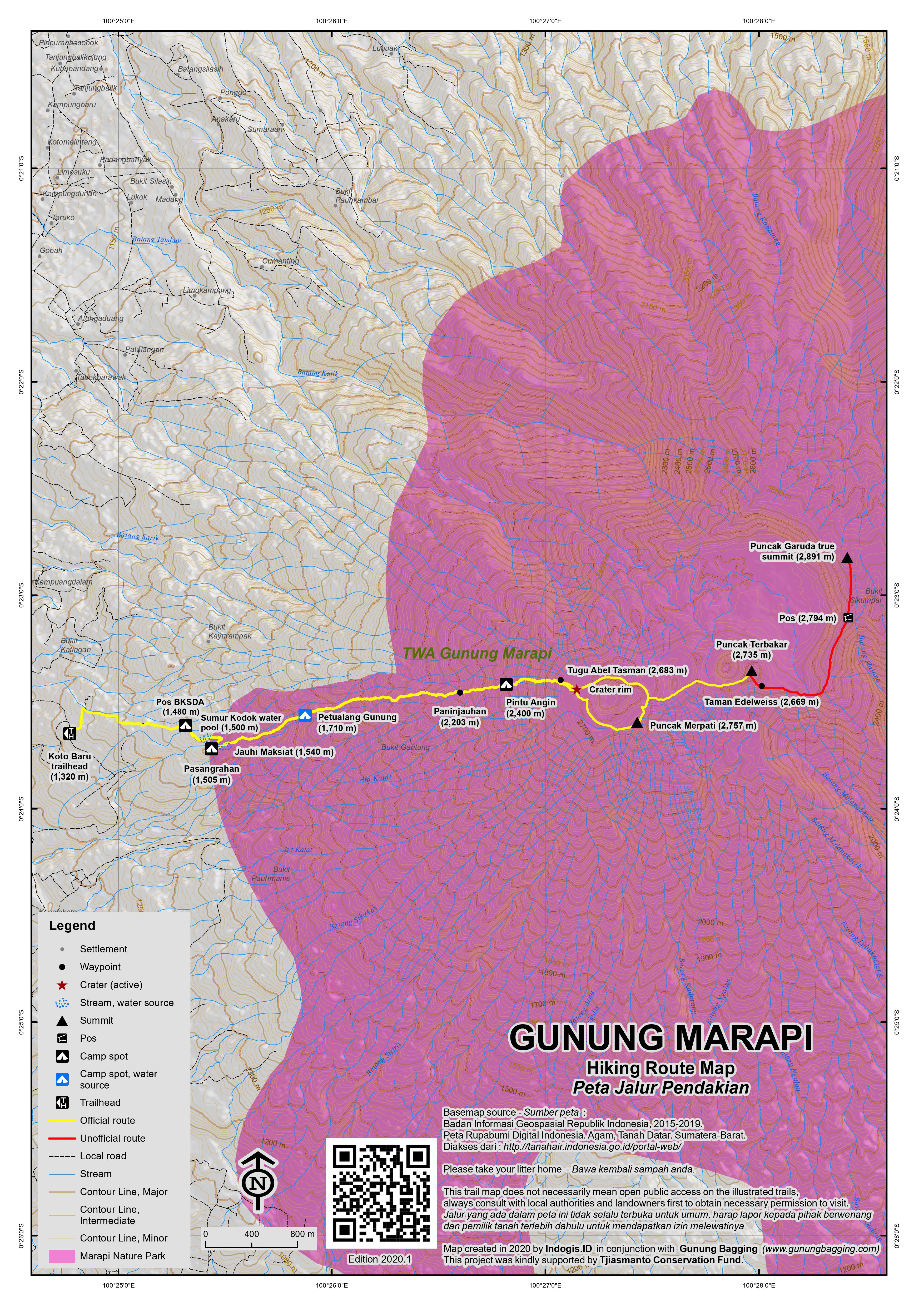 ‘Mountain of fire’ in Indonesian. According to legend, the mountain is the site first settled by the Minangkabau people after their ship landed on the mountain when it was the size of an egg and surrounded by water. There are large numbers of upright burial stones in the region which are oriented in the direction of the mountain, indicating its cultural significance. (Wikipedia, 2011)