Ili Werung volcano forms the end of one of Lembata’s main southern peninsulas and is comprised of several peaks with different names. The caldera itself is known as the Lerek caldera although another name is used for this range – Adowajo. This also appears to refer to the range as a whole and is an ancient name. Ili Werung (or Iliwerung) itself is an impressive lava dome and crater which is thought to have been formed and growing since 1870. Ili Werung apparently means ‘new volcano’ in the local language.

It takes around 2 hours to reach the area by road from Lewoleba along highly variable and occasionally challenging road surfaces. To visit both the highest point for the spectacular views, and also the active crater area, can easily be accomplished as a day-trip from Lewoleba, but be sure to take sufficient water with you as there is very little shade to be found on the volcano.

Ili Werung itself is only around 596 metres high according to the Bakosurtanal map of the area. The highest peak in this area is the much higher mountain located around 2 kilometres to the north-west (and equally accessible from local villages). Bakosurtanal suggests Ile Mauraja as the name and 1,080m for the height, although our GPS device gave a reading of 1,047m at the top. This peak, Mauraja, is the main hiking objective of those who visit, and could be thought of as the highest point of the Lerek caldera or the ancient Adowajo volcano.

Mauraja is not (or no longer) active. Fumarole activity occurs at the much lower Ili Werung, but the centre of activity in the volcanic complex now is actually further south at Gunung Hobal, an undersea volcano 800 metres off the south coast.

The trail to the highest peak (Mauraja) in the area starts in Desa Lerek (678m). There is, in 2021, a small wooden sign for a registration booth on the left side of the road. From here, follow the track upwards and onto some cement steps (740m) which lead a fair distance up the hillside (finishing at 791m). The main ridge (837m) is soon reached. From here, real care needs to be taken on occasionally dangerous ground, with slippery small rocks and near vertical drops on both sides. There are some old wooden posts to help guide hikers, but in 2021 almost all of these are weak or rotten.

A large rock (992m) comes just before the final push to the summit of Ili Mauraja (1,047m). A small stone with simple offerings of cigarettes marks the highest point. From here’s it’s another ten minutes along the narrow ridge to the viewpoint (1,005m) near the volcanology sensor equipment. Reaching Ili Werung crater from this side is not possible but it’s definitely the finest vantage point. Most hikers will have reached the top in around an hour.

Allow an hour to enjoy the views and about one hour to descend the same way, taking real care on the steep sections of scree. You may see Lewotolo (Ili Api), Ili Labalekang, and Ili Boleng (on Adonara island) in clear weather from the summit ridge.

Ili Werung crater itself can also be accessed from below. Follow the village road towards the coast and turn off to the left. A short stroll will take you to fumaroles. Indeed, local people have for a long time used the Watuwawer fumarole field for cooking. You can also hike up to the rim and peer into the crater but take real care on what might be unstable ground.

As mentioned above, there is an active underwater vent responsible for most of the recent activity. It is known as Hobal and is located about 800 metres off-shore. There is also a small dome on-shore but close to the coastline called Ili Grippe, apparently formed in 1948. Not connected to the volcano but devastating to the immediate local area, in 1979 there was a tsunami with over 500 killed and the village of Waiteba buried in landslides.

Nominated as a Spesial by Chris Whiting. 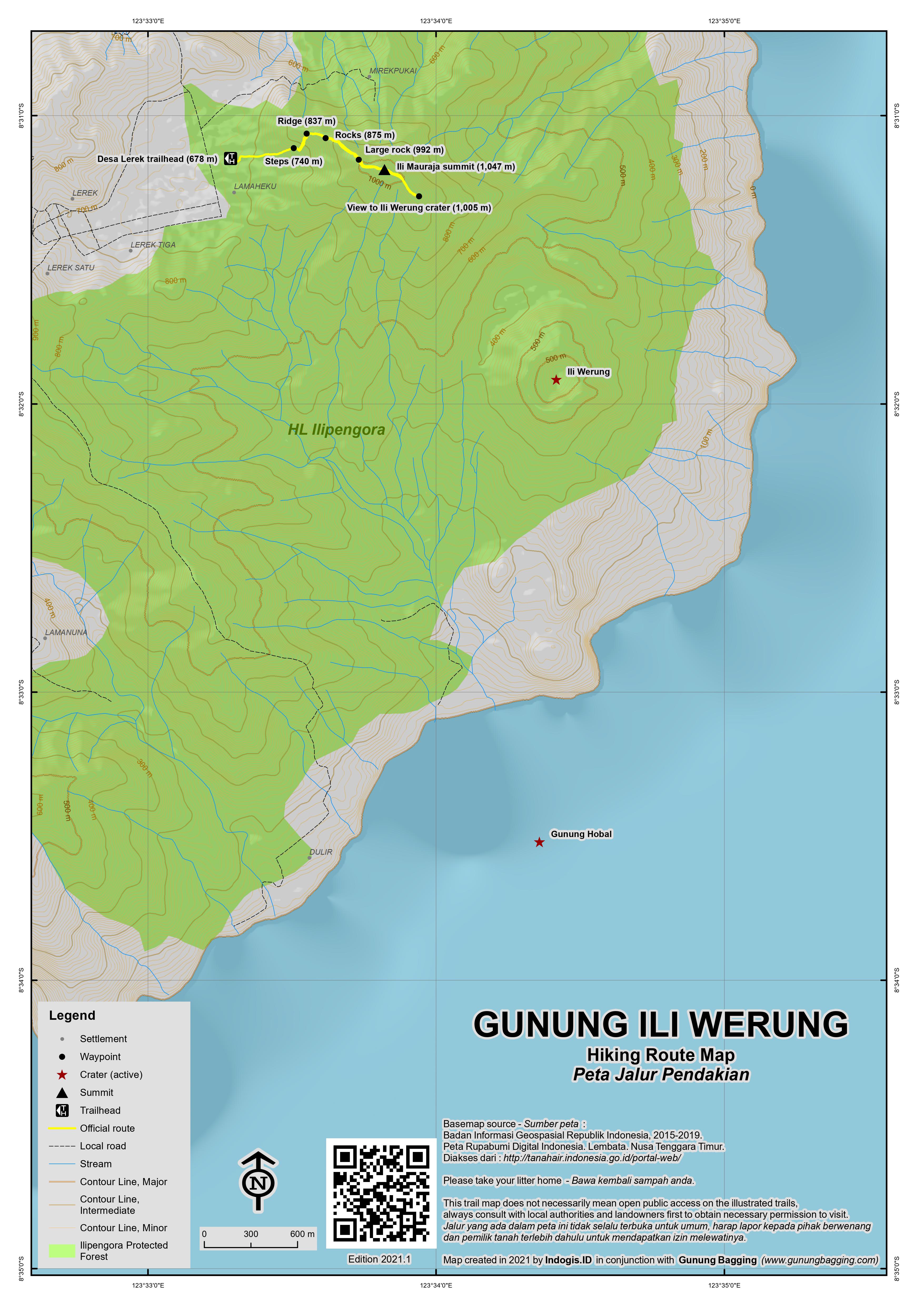