The strangely-named Gunung Tebak (‘tebak’ means ‘guess’) used to be one of the most mysterious mountains in Sumatra, with few trek reports to be found online and very little local information on there being any sort of trail to the true summit, despite it being the second-highest peak in Lampung.

It is actually a large range with numerous different peaks. There are two main places that a hike onto the densely-forested range could feasibly begin. In the east, less than one hour from Kotabumi, is Tanjung Raja. From the centre of Tanjung Raja (200m), there is a minor road running higher up the slopes of the mountain to around 600m above sea level. One student group attempted to climb Tebak from here in 2014 but, even with local help, they found it very difficult. Apparently, locals said they had climbed to the top in about 4 hours, but after 12 hours this 2014 team gave up short of the ‘summit’.

It is almost impossible that it would only take 4 hours to reach the true summit of the range from the Tanjung Raja side, not only because any trail is so infrequently-used that it would be re-cutting, but also because the highest point is several kilometres further west, beyond other peaks and considerable drops/ cols. It is therefore most probable that the locals were talking about the 1,700m-plus peak at the eastern end of the range which on some maps is known as Gunung Ulusabuk.

On the old US military maps of Indonesia, it appears that there is (or was) a triangulation pillar at the true top of Tebak near the western end of the range, and if so then locals must have been up there in the early twentieth-century at least. An approach from the western end would begin from the small road – Jalan Raya Tri Budisyukur – running down south from the main road at Sumber Jaya (about 1hr 20min by car or motorbike from Kotabumi) down 8km or so to Purawiwitan / Kebun Tebu.

There is actually a very interesting megalithic site called Batu Berak (or Batu Brak) which consists of many tens of standing stones and other ceremonial collections of rocks apparently many hundreds of years old. There is also a very lovely old weeping fig tree (‘beringin’). This spot is very much worth a visit in its own right, yet is not well known outside of Lampung. It takes about 20 minutes to reach from the  Soekarno Monument at the junction on the main road at Sumber Jaya. The western end of Gunung Tebak is seen from here, but finding locals who know much about hiking up to the top is very difficult. However, some folk have recently been up a couple of hundred metres above the valley to a spot they call Gunung Abung (does this refer to the lower slopes only or the whole range?) and a waterfall beneath the mountain.

In 2018, it was confirmed that a group of local hikers reached the summit from Tribudisyukur (the south-western side, starting elevation approximately 1,000m), taking an incredible 11 days to find a way to the top! Now that a way has been found, it is alleged that you can be up and down in two full days (one day up and one day back down again) so this is one we may investigate further soon.

Bagging information by Dan Quinn (May 2019) 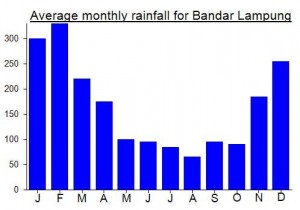