Gunung Pantaicermin is not a popular destination for hikers, and it is probably because of this that the trail is clear of litter, there are pitcher plants growing undisturbed on the higher ridges, and at least one of the few Sumatran tigers in this part of the island stalks its prey on the lower slopes of the mountain. There are very few decent views due to the dense forest, but because the trail is so well-defined it makes for a great outing if you’ve already done West Sumatra’s more popular peaks.

The mountain forms an extensive high plateau heading southwards towards the Kerinci region, although the highest point is tucked away and difficult to see from the main road. The name ‘Pantaicermin’ (‘mirror beach’) sounds very exciting but it appears to be simply named after a local village. But why that particular village is ‘a mirror of the beach’ is uncertain.

The trail starts in the small village of Koto Tinggi (‘high city’). A city it certainly isn’t, although it is pretty high up at just under 1,300 metres above sea level. It’s just 15 minutes from the main Padang-Kerinci road, near Surian. The village has several water wheels which are used for irrigation purposes and there is even a hot spring hidden above rice terraces. Local people have helped student hikers (such as those from Padang’s Mapala Unand ‘MU’) up the mountain on several occasions but the trail up towards the highest ridges is very pleasant mainly because of the local people using it to hunt for rare birds to sell. Why so many Indonesians want to keep birds in cages rather than enjoy the sounds of them in the forests is a real mystery. Sad.

Once you have gained the ridge in the forest (1,567m) you will probably be able to hear the wondrous sound of the siamangs as there are many living on this mountain. There is also a good chance of hearing and then seeing hornbills as they fly above you and settle in the highest parts of the trees. The trail is pretty obvious at this point, and climbs gradually with an occasions steep section before levelling off again. There are a couple of metal arrow signs left by MU in 2009, and other ‘landmarks’ include a tiny temporary shelter (1,834m), Pos 1 (1,965m) and unmarked Pos 2 (2,270m). Pos 1 is the best place to camp on the mountain as it’s as flat and large as you will find (perhaps enough for 3 or 4 small tents) and Pos 2 only offers space for one or two small tents at best.

At what we have called Pos 3 (2,534m) are a cluster of pitcher plants (Nepenthes singala, named after another mountain of West Sumatra – Gunung Singgalang) and enough space for just one small tent.  100 metres further you will reach a cement pillar (2,540m also). This is a boundary marker, marking different ‘kabupaten’ (Solok and Pesisir Selatan). Again, there is space for one small tent. You should be able to reach this point in between 4 and 5 hours from the start. The trail then leads down about 70 metres or so before reaching an easy-to-miss junction (2,475m). The decent trail heads down the side of the mountain (down to the left) whereas a very rough and overgrown trail continues forward/right just a few metres along the top of the ridge. Alas, it is still 1.9km from here to the true summit of Pantaicermin.

To reach the highest peak, which MU claim to have done on expeditions lasting up to a week on more than one occasion, would require several hours of careful machete work. 1.9km on a reasonable trail could take an hour or less. To have to open a trail (or ‘re-open’ it if nobody has been there for several years) is a serious and tiring undertaking, perhaps requiring an extra day (but certainly not a week). In any case, you might not be sure you have reached it unless you have the summit co-ordinates in your GPS. Look out in this area for a species of Arisaema, plants which have the ability to change sex based on nutrition and genetics, which has a dark red/purple leaf overlapping the inside of the flower.

On the way back down, it makes most sense to continue along the ridge rather than drop down at 1,560m because firstly there are some lovely views back down the valley, secondly you may be lucky enough to spot fresh tiger prints and finally because ‘air panas’ (hot springs) can be found down to the left (on descent) near rice paddies and a jambu (guava) tree. Ask locals as it’s tricky to find and is basically just a wide bamboo pipe with lovely warm water gushing out of it. A great spot for a post-hike wash, especially as the cold water in the village is pretty cold indeed up at 1,300m. 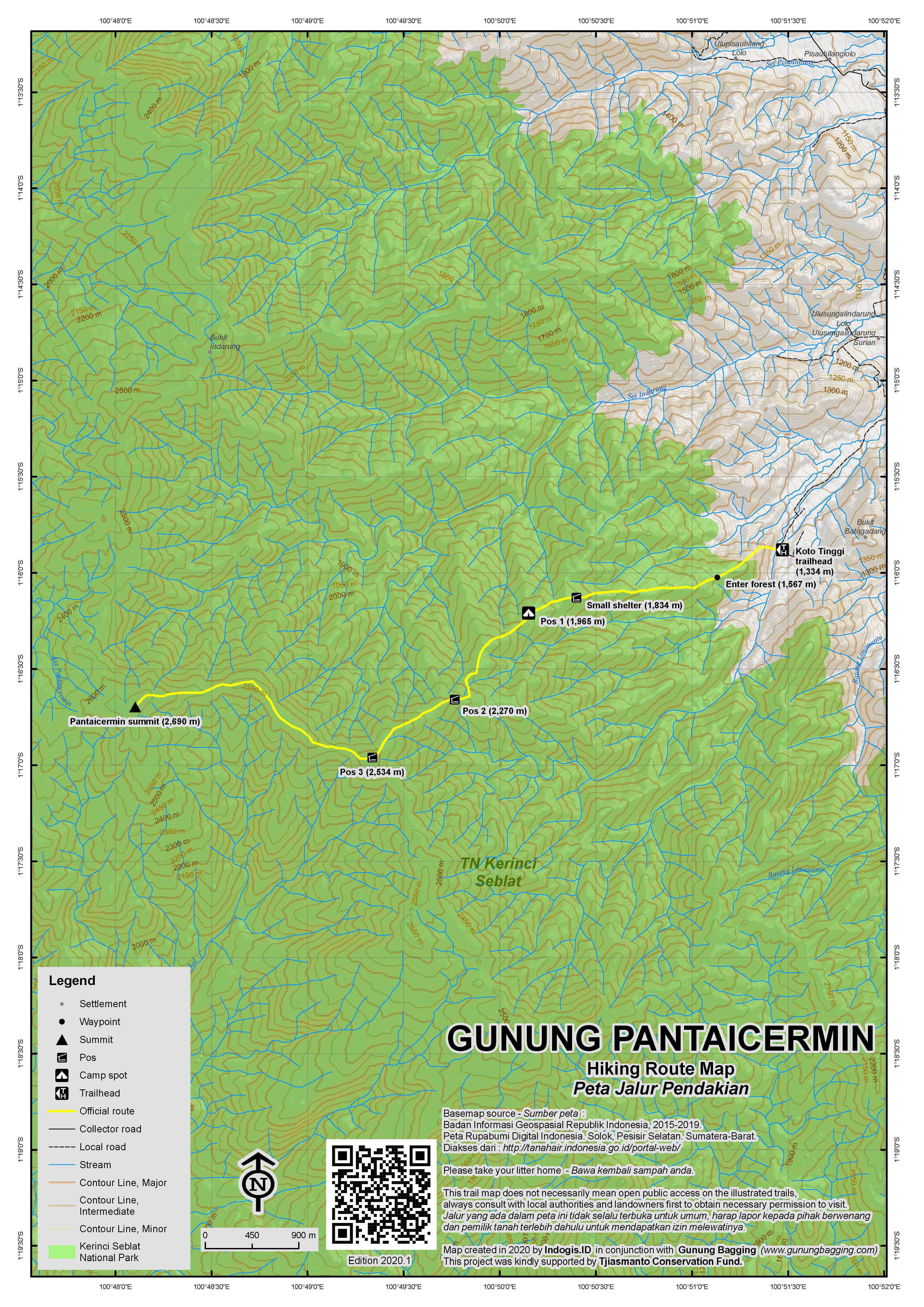 ‘Mirror beach’ mountain in Indonesian. Named after Pantaicermin town at the foot of the mountain.