This vast mountain area lies directly south of Bandung in Cisangkuy valley and is surrounded by a huge tea plantation – the largest in West Java. There used to be a Radio Malabar transmitter station here which was world famous in colonial times – all that remains today is a few crumbling stone walls. The name of the mountain is apparently taken from India’s Malabar coast and Hindu tradition and culture remain strong in this area. The highest peak is known as Puncak Besar (‘big peak’) and is actually very easy to reach from Pangalengan (sometimes spelt ‘Pengalengan’) to the south of the range.

For Puncak Besar, take a left at the first fork in the road before the town itself. Pangalengan is over 1,400 metres above sea level and there are plantation trails and farm huts and occasional warungs leading up the hillside towards Puncak Besar as high as 1,900m. From the village of Cinyiruan (1,590m) it takes about three hours to reach this very-rarely visited, unmarked and overgrown highest peak of the range and two hours to descend. There is plenty of room to park vehicles near the sports field. A notable landmark near the beginning of the trail is the grave of Gerarld Alfred Cup (1,640m), presumably a European with links to the local tea industry. You will inevitably have to ask farm workers for help negotiating the maze of trails or, better still, ask a local to guide you all the way up. Without a guide, a GPS is absolutely necessary. There are some good views on the lower slopes, Gunung Tilu to the west and in the distance you may be able to see Gunung Gede Pangrango and Salak in very clear conditions. Higher up, the views are much more limited though there are a few places where you catch a glimpse of the vastness of the mountain range.

Ultimately, doing a hike to Puncak Besar only would not being doing justice to what is a very wild and very interesting mountain range. There are three notable peaks each of which can be climbed individually – that is definitely the easiest option. At the northern end of the range are two excellent peaks with good views from the tops – Puntang (north east, 2,222m) and Haruman (south west, 2,140m) both accessible from Mekasari and the Gunung Puntang tourist area which includes the Curug Siliwangi (waterfall) and Puntang camping grounds. The entrance is at 1,279m above sea level. Other than the waterfall, Mount Puntang itself is by far the most popular hiking objective here and Haruman, by contrast, is a steep, muddy climb up a sometimes unclear path. They both require about 4 hours to reach the top of.

The summit of Gunung Puntang is free from tall trees and so is by far the best viewpoint in the entire mountain range. In clear weather you can see across the city of Bandung in the Bandung plain across to Burangrang, Tangkuban Parahu and Bukittunggul north of the city, and beyond Gunung Haruman to Gunung Tilu and Gunung Patuha. You may even be able to see Pangrango in the distance. The trail to Gunung Puntang starts at the Puntang carpark area and leads straight up towards a minor first peak, Puncak Mega (1,870m), where there are ruins similar to the ones found on Haruman on the other side of the valley. These are apparently the remains of radio towers for Radio Malabar – the main ruins of which are to be found a 20-minute walk up the valley itself from the car park. It’s best to take a guide for Gunung Puntang as finding the trail at the start can be very confusing due to the number of small trails. There is an information office  at the car park where you can ask for assistance. Once you’re halfway up Gunung Mega it is very obvious as you follow the ridge as it leads up towards Puntang. Allow 7 hours in total to climb Puntang and return to your car.

North-south traverses are possible (from Mekarsari to Pangalengan and vice versa) but they are rarely undertaken and navigating can be very difficult on overgrown and thorny trails. This is definitely one where you need gloves and long trousers to avoid being cut. On the positive side though, this is one of the wildest areas in West Java and you are likely to see some very interesting and rare wildlife. It takes a full day, about 8 hours, to make a traverse.

If doing a north-south traverse it is better to go via Haruman as the western ridge is more easily followed than if hiking from Puntang which would involve negotiating a very large jungle plateau – have a look on Google Earth, an obvious place to get very, very lost. A GPS device is essential in this rarely-visited terrain. From the Haruman peak it is fairly obvious that you must simply follow the ridge south-east towards Puncak Besar, staying on or near the top of the ridge throughout. There are some beautiful views, especially from the top of Haruman, of the vast valley below and Puntang, Mega and the other eastern mountain tops too. This is an area full of waterfalls and landslides so do take care!

One other difficultly in doing a north-south traverse is finding the correct trail to Puncak Besar. The forested peak comes into view about 90 minutes beyond Haruman but finding the trail to the top (a right turn) can be tough. There are several overgrown trails leading south towards Pangalengan but they don’t all go Puncak Besar and, given just how overgrown they are, a lot of people would have difficulty crawling under very sharp, low branches! It would definitely be a good place for army training! If you’re heading south you will inevitably end up on a farm trail before long and then reach the tea plantations north of Pangalengan where you can get an ojek to your accommodation or a bus back round to Bandung if you’re early enough!

Not to be confused with the smaller mountain of the same name near Kuningan which has a Batu Tulis (inscribed rock) at the top called Batu Naga (‘Dragon Rock’), Gunung Tilu is an imposing peak to the west of Pangalengan. ‘Tilu’ means ‘three’ in Sundanese so it is no surprise that Gunung Tilu seemingly has three tops from certain angles, though at around 2,052m (2,056m on the Baksurtanal map) the highest one of the three is much higher than the others. It is clearly viewed on the right of the road running to Pangalengan from Banjaran. This is the route that the buses from Bandung to Pangalengan take. It is also a great sight from many of the tea plantations roads around Pangelangan, especially early in the morning and at dusk (when clear).

Rarely hiked and now part of a conservation area meaning access is rarely granted by authorities, Gunung Tilu can be explored from a few different places but the shortest and easiest trail starts in the Kebun Pasir Malang tea plantation at Riunggunung to the south of the peak itself and leads through coffee and cabbage plantations. From Riung Gunung (1,500m, space to park in the field), it is about 2 hours to reach the peak and 90 minutes to descend. The best views are to be had at 1,640m just before entering forest (by a marker with CA506 on it) down to Gunung Wayang (with Gunung Kendang mostly hidden behind) and Gunung Papandayan in the distance, 1,970 to the left towards Gambung and Ciwidey, and 2,038m to the right at the top of a landslide area down to Situ Cileunca (the lake near Pangalengan).

The peak offers little in the way of views and is a simple, small clearing in the forest. There are leeches (‘pacet’) on this mountain, even in dry conditions.

Even if you don’t hike Gunung Tilu, the road that twists and turns round the shoulder of the mountain from Pangalengan to Gambung and towards Ciwidey is one of the loveliest drives in West Java. Much of the road has been newly resurfaced and there is currently little traffic through the tea and coffee plantations. 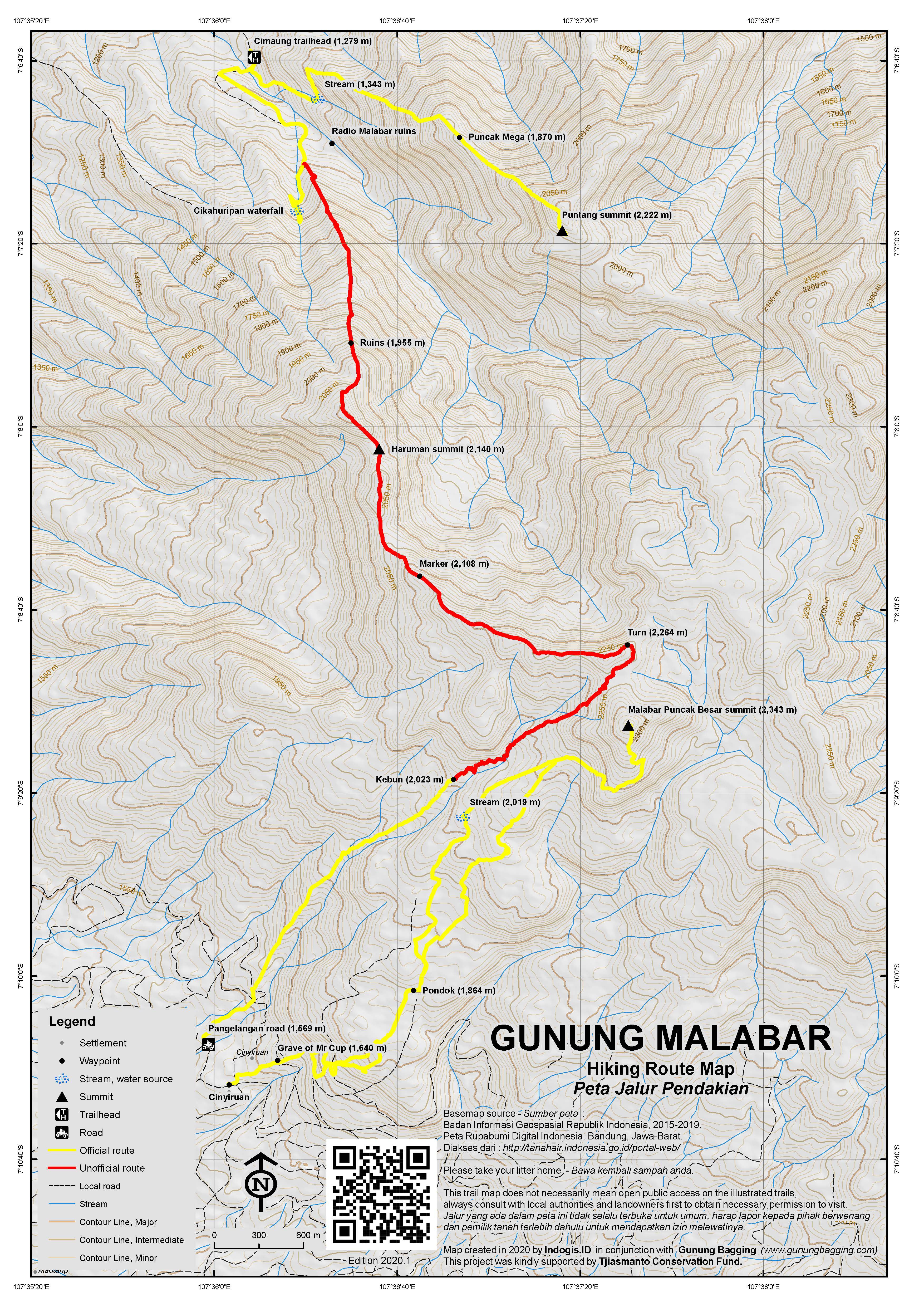 ‘Malabar’ is allegedly named after the Malabar coast in India, although the evidence for this is thin on the ground. ‘Puncak besar’ simply means ‘big peak’ in Indonesian.