Lokon is a very active twin volcano with the adjacent Empung and is located close to the pleasantly cool town of Tomohon, which is surrounded by agricultural land. All recent eruptions have originated from the Tompaluan crater which lies in the saddle between the two peaks – when most people say they climbed Lokon they mean they visited the crater and most guides will think you only want to go to the crater. If you are flying in or out of Manado airport in clear weather you are in with a chance of an excellent view of Lokon, Tompaluan crater and the old Empung crater from above.

There is actually a Volcanological Centre in Tomohon where you can find out information about the activity of volcanoes in the area and obtain an English speaking guide – several guides have quite good knowledge about the history and geology of the area. However, all the guesthouses and hotels can usually provide a guide too. A good thing about the hike to Lokon is that it starts from wherever you chose to stay in Tomohon (the town is at around 800m above sea level). You begin by wandering along pleasant country lanes with good views of Lokon, before you have to pass by a small stone quarry and start the climb up to the crater. An early morning hike is the best way to have a good chance of panoramic views so – if possible – set out no later than 5am.

The route is along a (usually) dry river bed that is actually an old lava flow; this can be quite slippery because it is so smooth. From the stone quarry it takes just 60-90 minutes to reach the Tompaluan crater rim (1,130m). The overgrown Empung (1,340m) lies to the right and has a deep, vegetated crater well worth inspecting on its own right. On the left is the true summit of Lokon (1,580m). Most people actually stop at the crater and rarely go to the summit, for a very good reason. The steep slopes of the dome shaped Lokon mountain quickly become dominated by 8 ft tall grasses that are razor-sharp. You really need to wear some gardening gloves and long trousers. If possible, you should also bring a machete to hack away the worst of the grasses that will be encroaching on the narrow path. The true summit on the relatively flat top is hard to find because of the grasses, but a trail is identifiable that winds through to a high point crowned with a tall cement trig pillar (probably of Dutch origin).

Warning: there is another overgrown mini-crater near the summit of Lokon, avoid this area and skirt around it to the left to reach the summit area. There is also a very deep hole right next to the summit pillar itself. Great views of Tomohon, the crater, Gunung Klabat and the Bunaken islands (including the steep, extinct volcano cone of Manado Tua) can be achieved part of the way up the slopes of Lokon, but even better is the panorama if you stand on top of the summit pillar itself. From the atop the pillar you can see smoking Soputan volcano in clear weather conditions and sometimes the islands further north of Manado including Tagulandang.

From the crater rim to the Lokon summit pillar takes another 60-90 minutes, so in total you can be up at the summit in about 3 hours or so from the centre of Tomohon. Bear in mind that many guides will not want to trek to the summit especially if the wind is blowing gas from the crater in the direction of the summit. Access to the crater itself is also determined by the level of activity and given the number of victims over the years (including most recently in 2017) this is something to take very seriously indeed.

Return the same way you came and allow about 2 hours from the summit to Tomohon.

Nearby Gunung Mahawu (1,324m) is also worth a quick visit, and you can reach the crater rim and do a circuit very easily from Tomohon. Indeed, the road to the usual entrance takes you almost to the top, but it makes an additional pleasant stroll from or to the main road further down. 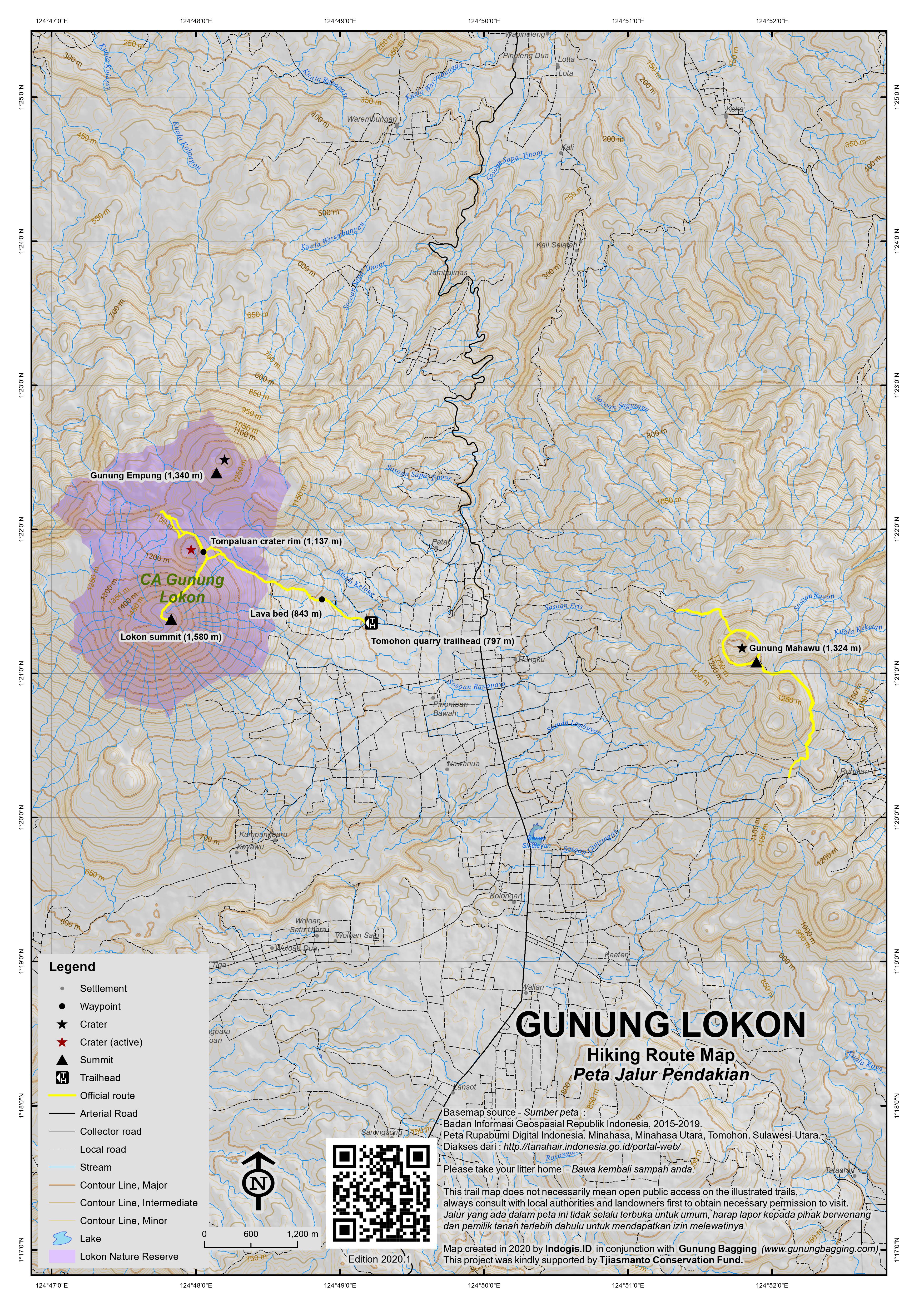