This Ribu has two excellent paths to the top from the south, with the two trailheads just 800 metres apart (though in different provinces!) It is perhaps Java’s easiest 3,000m peak, especially since the two most popular paths start at an elevation of 1,900m, and is perhaps the island’s most mystical. It’s a great hike for those new to hiking in Indonesia and the views are fabulous. Although the volcano hasn’t erupted since 1885, you will be able to smell sulphur if ascending from the south, as there is considerable fumarole activity at the crater known as Kawah Candradimuka (approx. elevation 2,550m but not ordinarily accessible).

The closest town to the starting point is Tawangmanggu, about an hour’s bus ride from the city of Solo. Tawangmanggu has plenty of accommodation which is probably worth making use of so that you can get an early start the next morning. Many of the roadside warungs at the trailhead will also let trekkers bed down for the night for a modest fee. A little further east is the little town of Sarangan which has a lake and has been a popular retreat at weekends since Dutch colonial days. In clear weather, Gunung Lawu can be seen from the lake.

The trailhead for the “main” route is about 10 kilometres east of Tawangmanggu at Cemoro Sewu, just over the East Java border. You are requested to register here. Gunung Lawu is a very popular hike with Indonesian students and there is even a warung (shop) and well (for holy water), Sendang Derajad/Drajat, near the top. It is possible to climb and descend in one day (or to climb through the night, setting out at around 11pm to be sure of reaching the top for sunrise), but unless you are both incredibly fit and in a hurry, you will probably need to camp one night on the mountain.

The mountain lies on the border of Central and East Java and sunsets over Merapi and Merbabu are nothing less than spectacular. Apparently, the last king of Majapahit Empire in the 15th century, King Brawijaya V, retreated here – there is a prominent cave, Sumur Jolotundo, on the way up from Cemoro Sewu – and accordingly the mountain has significant traditional and spiritual significance for the Javanese. Many Indonesian presidents have visited the mountaintop and the mystical Hindu roots are obvious. Hikers are warned to avoid green clothing, for the same reason those who visit Parangtritis beach near Yogyakarta are similarly advised.

The area beneath the summit is home to 4 friendly families (in 2017), some of whom only descend a handful of times per year. They are obviously very resourceful people, and you will see some vegetable cultivation going on (including onions), and even some unusual art – beyond the main warung is a shelter made from glass bottles, cans and other discarded items that otherwise would simply be litter.

The Cemoro Sewu trail (starting elevation 1,901m) is roughly paved with stones the whole way up, with cut steps and handrails in places. This makes it an attractive route during the wet season, as it does not get slippy. The route is steep, however, and the rocky surface is not the most pleasant to walk on. There are 5 posts (pos) on the way up, and it takes approximately 45 minutes between each: Pos 1 Wesen-Wesen (2,197m) near the spring Sendang Panguripan, Pos 2 Watu Gedeg / Watu Jago (2,568m), Pos 3 Manis Rejo (2,795m), Pos 4 Watu/Batu Kapur (3,061m) and Pos 5 Jolo Tundo (3,125m). Note that there are two other shelters (at 2,112m and 2,145m) before Pos 1, at least one of which is known as Pos Sayur (‘vegetable post’).

The forest is fairly degraded but on the plus side the views from the trail are excellent, especially over to the southern hills on the other side of the main Cemoro road. This range of lower hills is labelled Kukusan on some maps, but seems to be better known as Gunung Djobolarangan, and has a height of approximately 2,200m.

Between Pos 4 and 5 is a large red sign near one of many caves on the higher slopes of the mountain (3,110m). From this point, the views are stunning and the trail flattens out. After Pos 5 you will see a network of smaller paths and mini cliffs with some caves on the left. Shortly after this you will reach the holy well Sendang Derajad (3,170m). A family lives here all year round.

Other basic buildings come into view, but for those who wish to head straight to the summit it is less than 20 minutes on the first of several short trails that lead directly to the highest point which is known as Argo Dumilah. There is a large cement column and spectacular views in all directions. Down to the left is a shallow old crater known as Telaga Kuning (‘yellow lake’) where numerous hikers have written their names using stones. Beyond the summit is a short, stony ridge which is perfect for photos in the late afternoon and sunset.

The best places to camp are in several flat areas just below the cement pillar on the peak or a little lower down near some simple cottages and a warung owned and run by Mbok Yem and where porters usually spend the night. This area is known as Pesanggrahan Argo Dalem (3,140m) and you can even stay in the warung if there is space to lie down (if you arrive late there may not be any room left). The advantage to staying near Argo Dalem is that it is a little warmer than camping right near the top and the sunrise views are just as good as from the summit as you are facing east. And of course you can also get simple meals and snacks here, even during Ramadan.

Do be warned that it gets very cold near the top and unprepared climbers have died on Lawu.  Take extra layers of clothing with you. Early morning frost is common!

After admiring the sunrise over the peaks of East Java (look out especially for Arjuno-Welirang, Semeru and Liman), you can descend the same way to Cemoro Sewu in 4 hours or a little more – or better still head down on one of the other two trails. There is an important crossroads just beyond the warung – left (west) towards Cemoro Kandang or – for the more adventurous – straight on (northwest) towards the ancient Hindu-Javanese temples of Candi Cetho and Sukuh.

For the Candi Ceto route, make sure you have a guide who knows the way as it is much less used than the other two routes and is around 16 kilometres in length (allow 6 hours). You may notice at least two ancient female fertility stones – yonis – (one near the trail junction by the warung, and one near the summit). These must surely be linked to the famous lingam and yonis found at the Cetho and Sukuh temples. If you head down this way with an expert guide, you can take an ojek or angkot back round to Tawangmanggu (about 30 minutes).

A much more popular and straightforward option is to do a circuit by heading back down the Cemoro Kandang trail (about 4 or 4.5 hours down). From the junction near the warung, turn left and follow the trail as it skirts round the summit and begins to offer views west to Merbabu and Merapi (and sometimes Sumbing and Sindoro beyond). The trail is a little more overgrown and slippery than the Cemoro Sewu route but the views are possibly even better. The following is a description of the Cemoro Kandang route from the starting point at the base.

The second most popular route starts at Cemoro Kandang (starting elevation roughly 1,952m), a short stroll west along the road from Cemoro Sewu (allow just 15 minutes from one to the other), just across the bridge that marks the provincial border. There is also an entry post here where you are required to register.

The Cemoro Kandang route is longer than the Cemoro Sewu trail, about 11 kilometres as opposed to 7 kilometres. However, it is in many ways a more attractive route – the climb is less steep, thanks to a large number of switchbacks; it passes through pleasant forest at first, and offers more views in its middle sections. It is also a “real” trail, rather than a paved path.

From the check-post the trail rises relatively gently through the forest to Post 1, where there is a hut. Note that before Pos 1 is a sign post for a waterfall (Air Terjun Studio Alam, 2,035m). Beyond here conditions remain similar until Post 2, another hut where there is also space to camp. It takes between one and two hours to reach Post 2 from the road. In this first section the trail is very well defined, although it is quite badly eroded in places, and muddy during the wet season.

Beyond Post 2 the trail cuts west, and begins to wind its way around the steep western flank of the mountain, passing another unnumbered post with a shelter. Although the forest is quite thick here there are views through the trees down to Tawangmanggu, and, on a clear day, to Solo and Gunung Merapi and Merbabu.

The trail rises up the mountain in a long series of switchbacks, which makes the going easy. Post 3 lies about halfway up the main climb, and beyond here the forest thins and the views become more expansive. The trail is well defined all the way up, though there are places to cut corners on the switchbacks if you’re in a hurry.

The ground levels out at Post 4, which would make an excellent camping spot, and the trail begins to cut around to the northern side of the mountain, remaining level, and actually descending in places. Around 30 minutes from Post 4 a metal sign marks a junction – straight ahead the trail continues to meet the Cemoro Sewu route at Pesanggrahan Argo Dalem, while to the right a short, rough path leads to the summit in around 15 minutes.

Despite being longer, the gentler climbs mean that the Cemoro Kandang route takes about the same time as the main Cemoro Sewu trail. It is possible to reach the summit in about five hours if moving relatively quickly. However, this route is less practical in wet weather and there are occasional landslides (in early 2012 there were a lot of broken branches and fallen trees along the trail, the result of recent high winds, though they did not impede progress).

Given that the two main trailheads are so close together, ascending by one route and descending by the other is an attractive option. This would also allow you to make a decent circuit of the peak.

Lawu’s Southern Hills: To the south of the main road cutting west-east over the range, the Lawu massif continues for several kilometres with a handful of additional peaks over 2,000 metres high. These were rarely visited and little-known until recently, but in 2019 the most accessible one is an easy hiking route in its own right. Called Gunung / Bukit Mongkrang, it is 2,194m and just 3 kilometres from the road, offering pleasant views from a grassy summit of Lawu itself. A second peak just under one kilometre further south-west is called Gunung Jokolangan and is actually higher at 2,312m but less commonly visited. 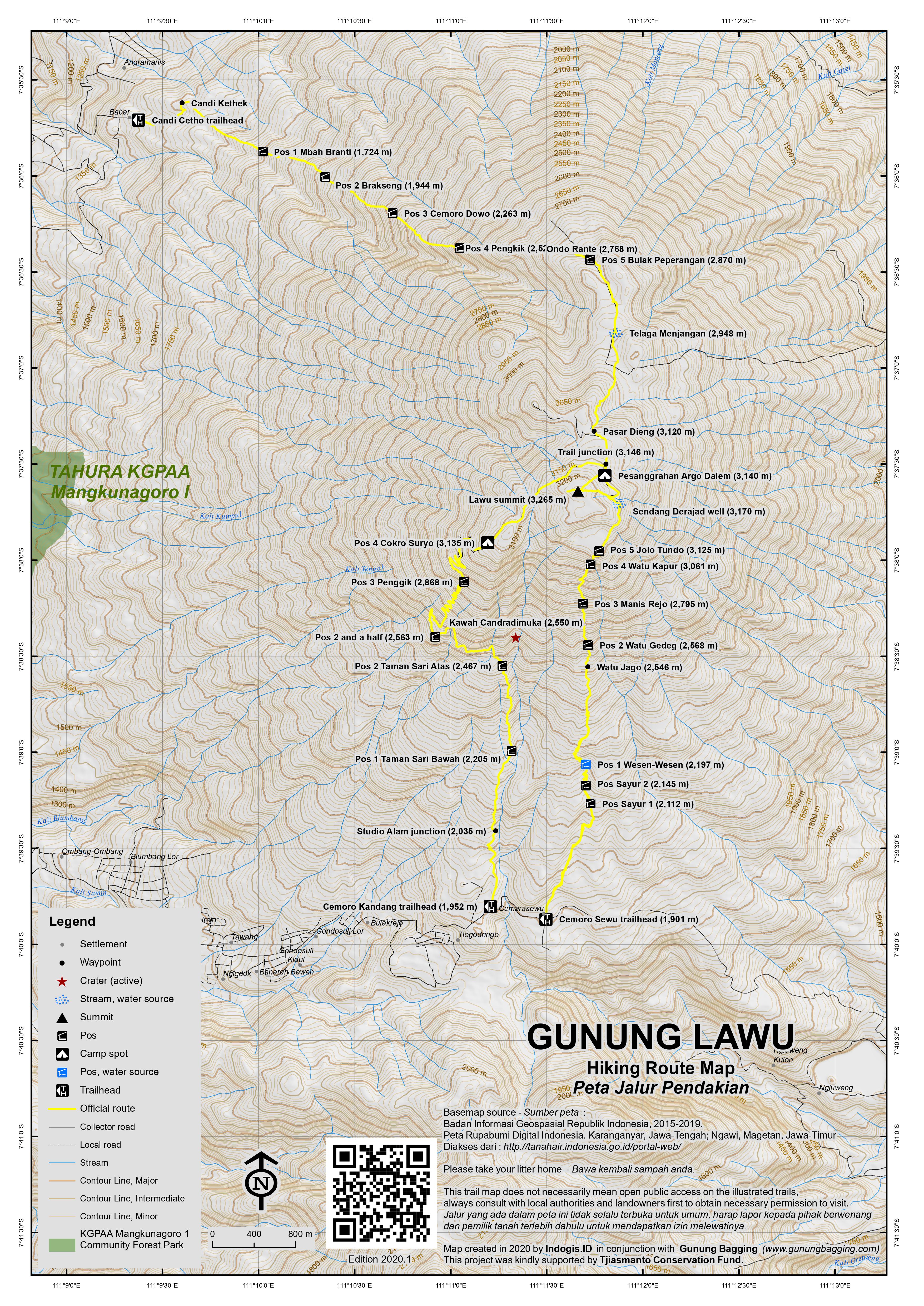 Ashy Mountain. Lawu comes from the Javanese awu meaning “ash”. Probably in the distant past the mountain was called Merawu (mer + awu) “the ashy one” but in the course of time the /r/ changed to an /l/ (see also Gunung Muria) and the initial syllable weakened and disappeared, leaving Lawu. (George Quinn, 2011)