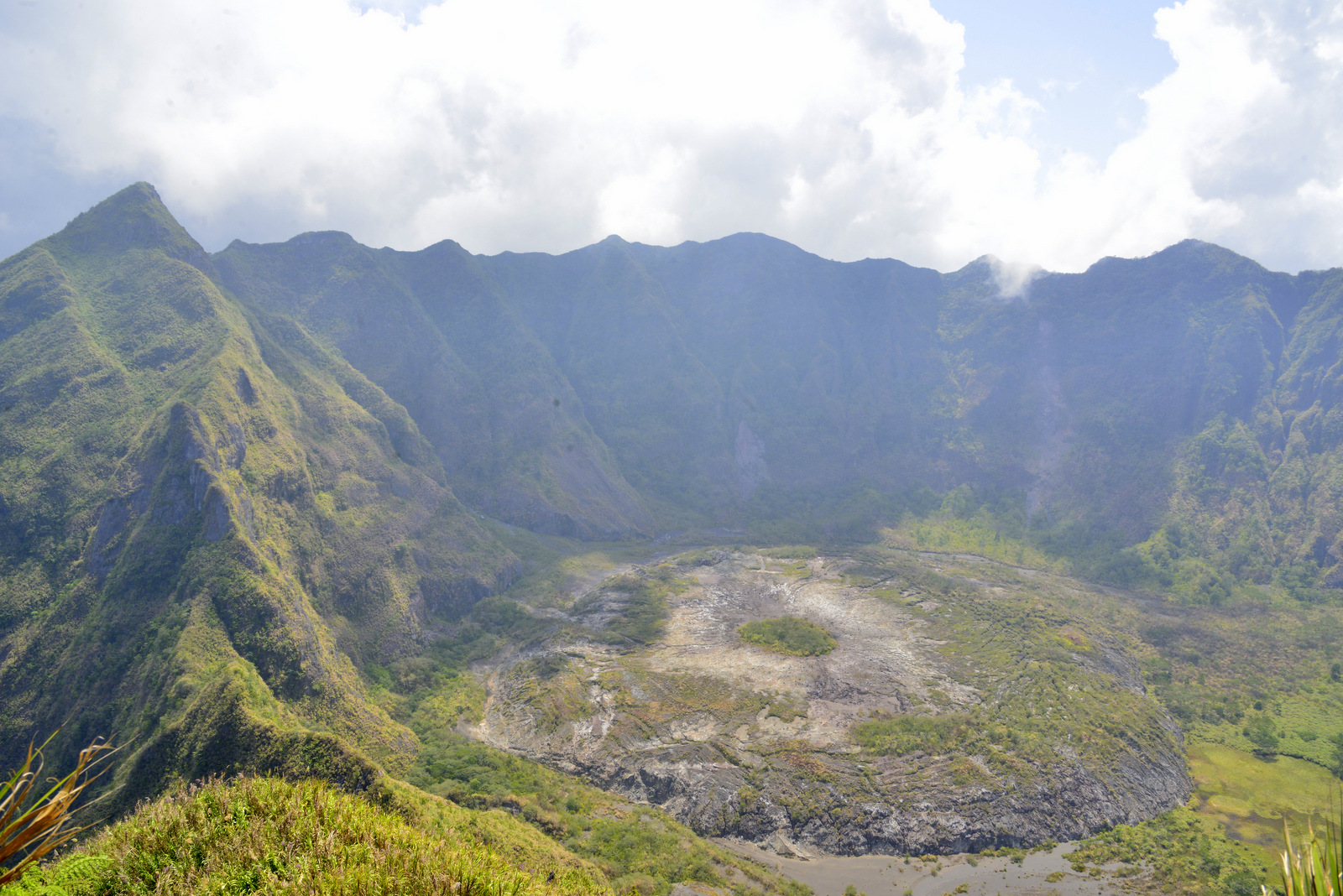 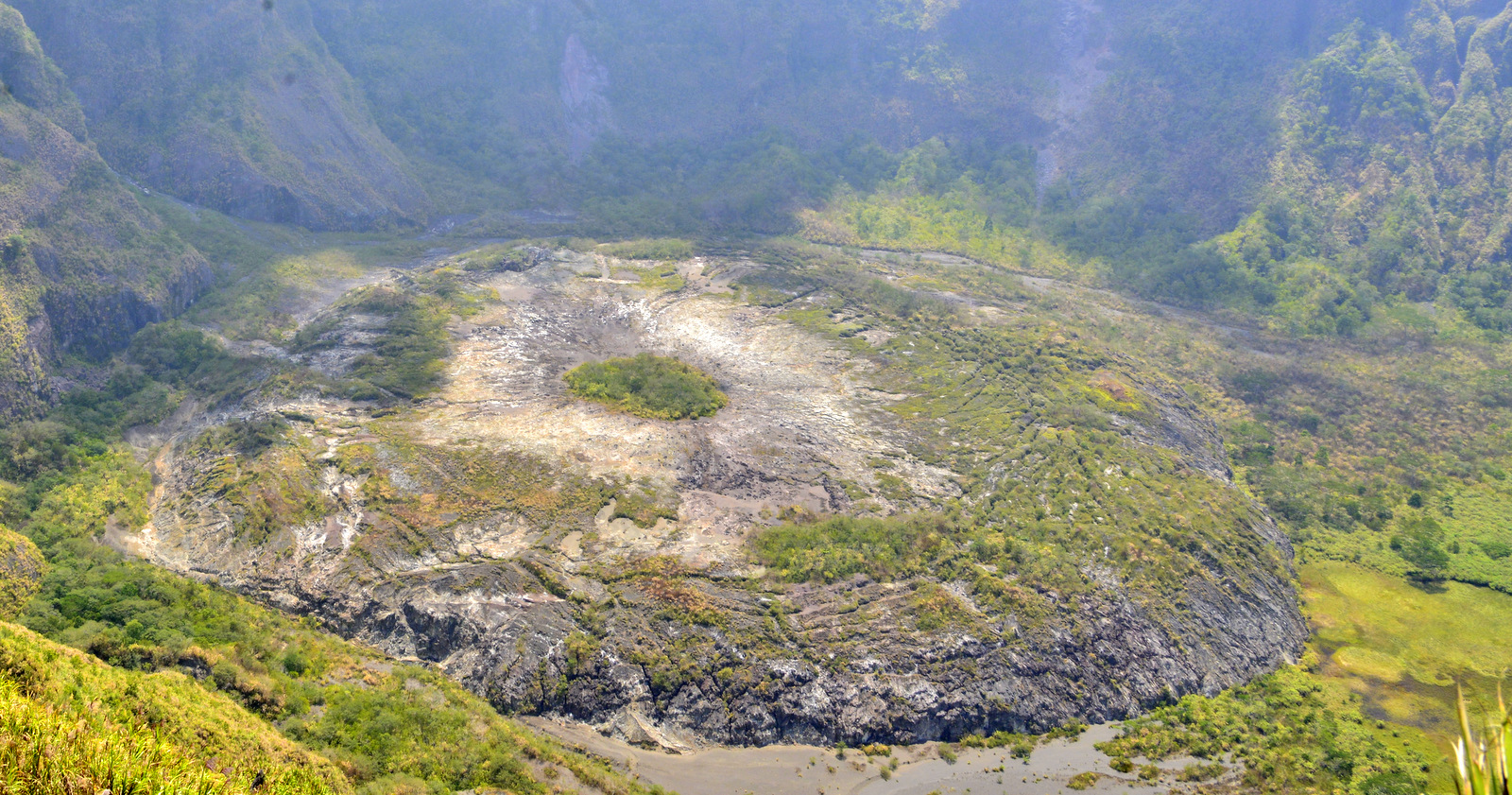 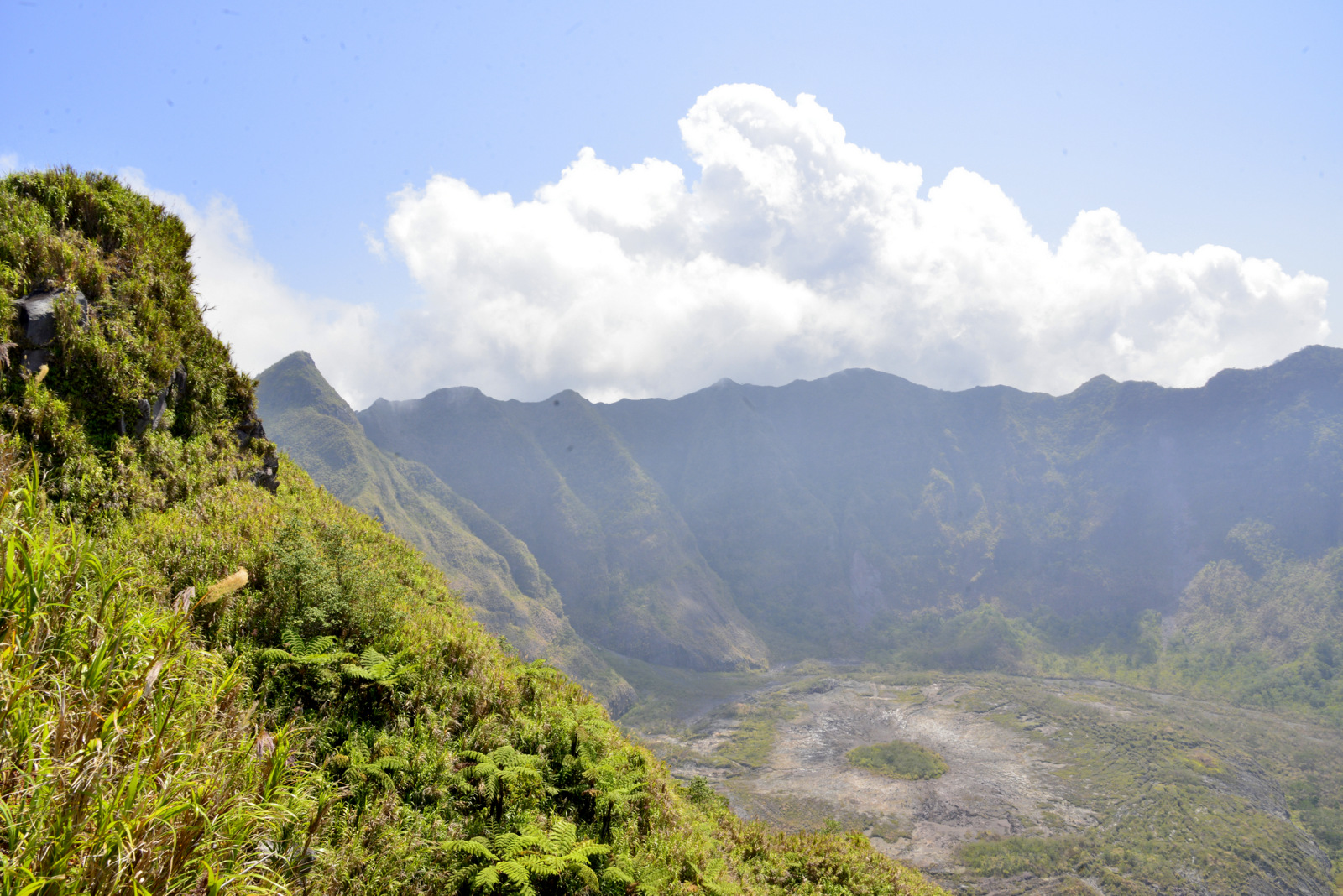 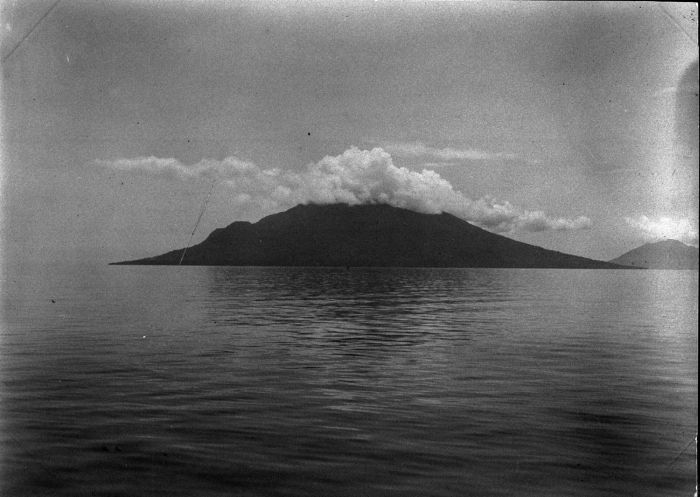 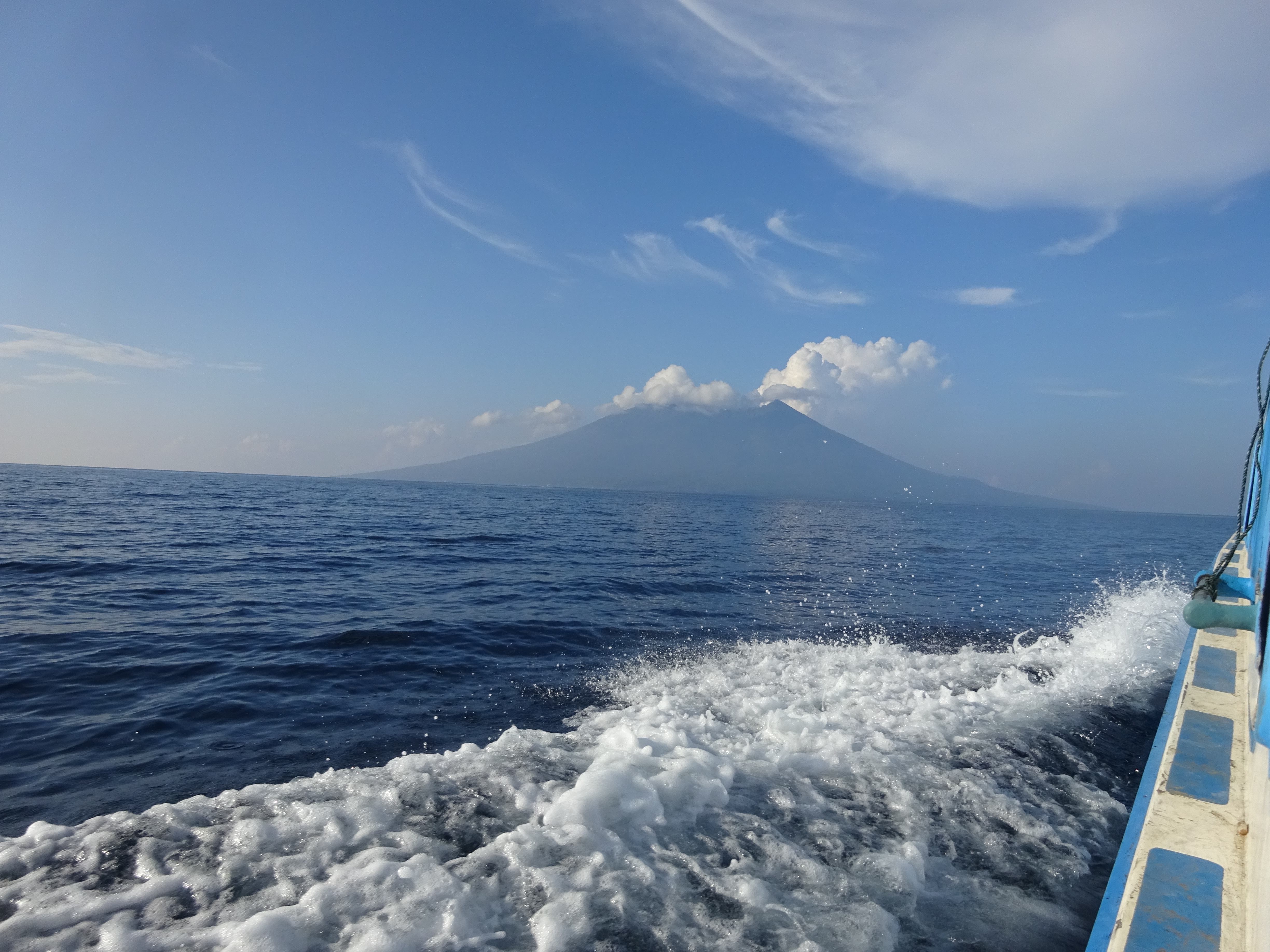 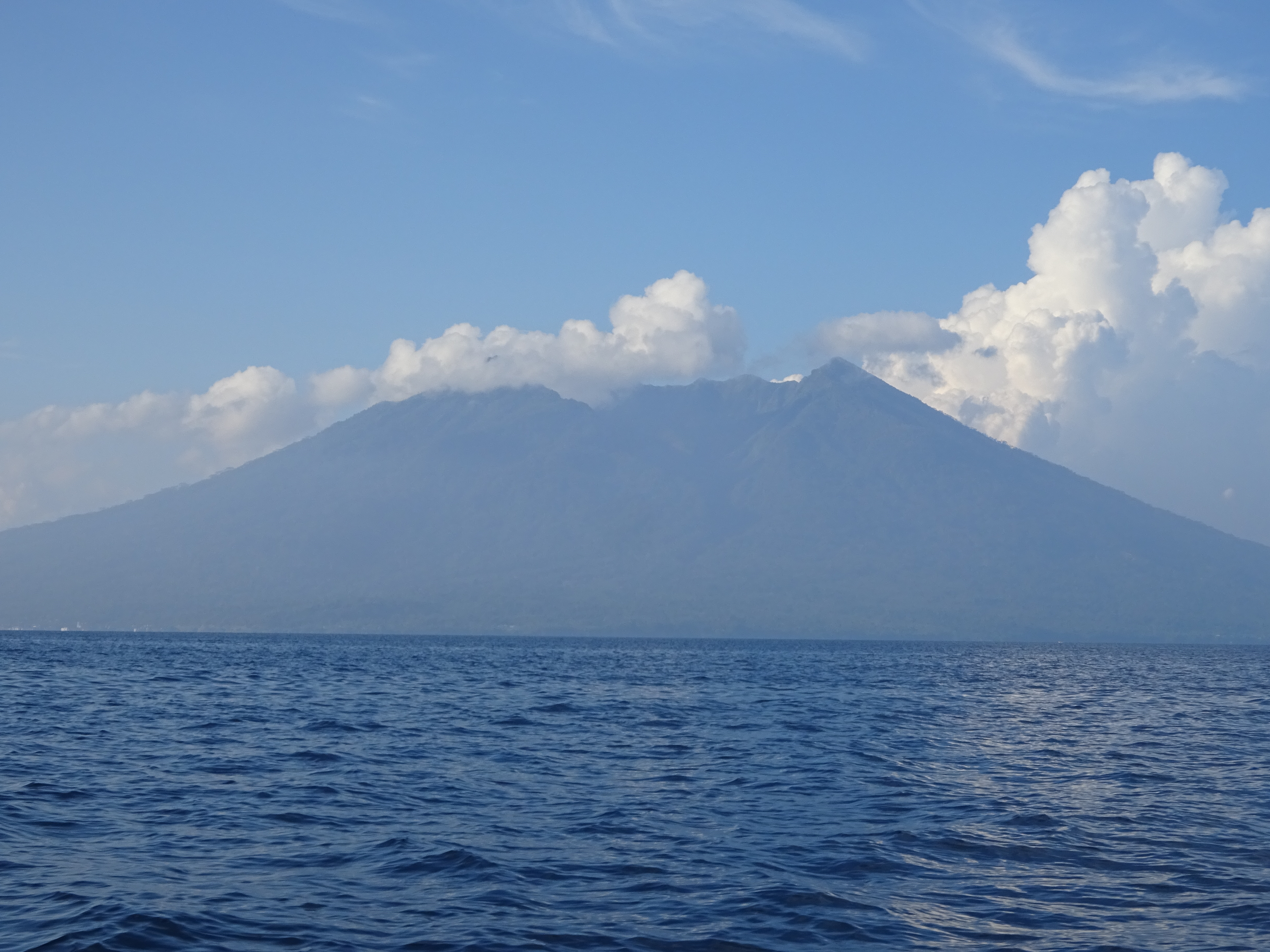 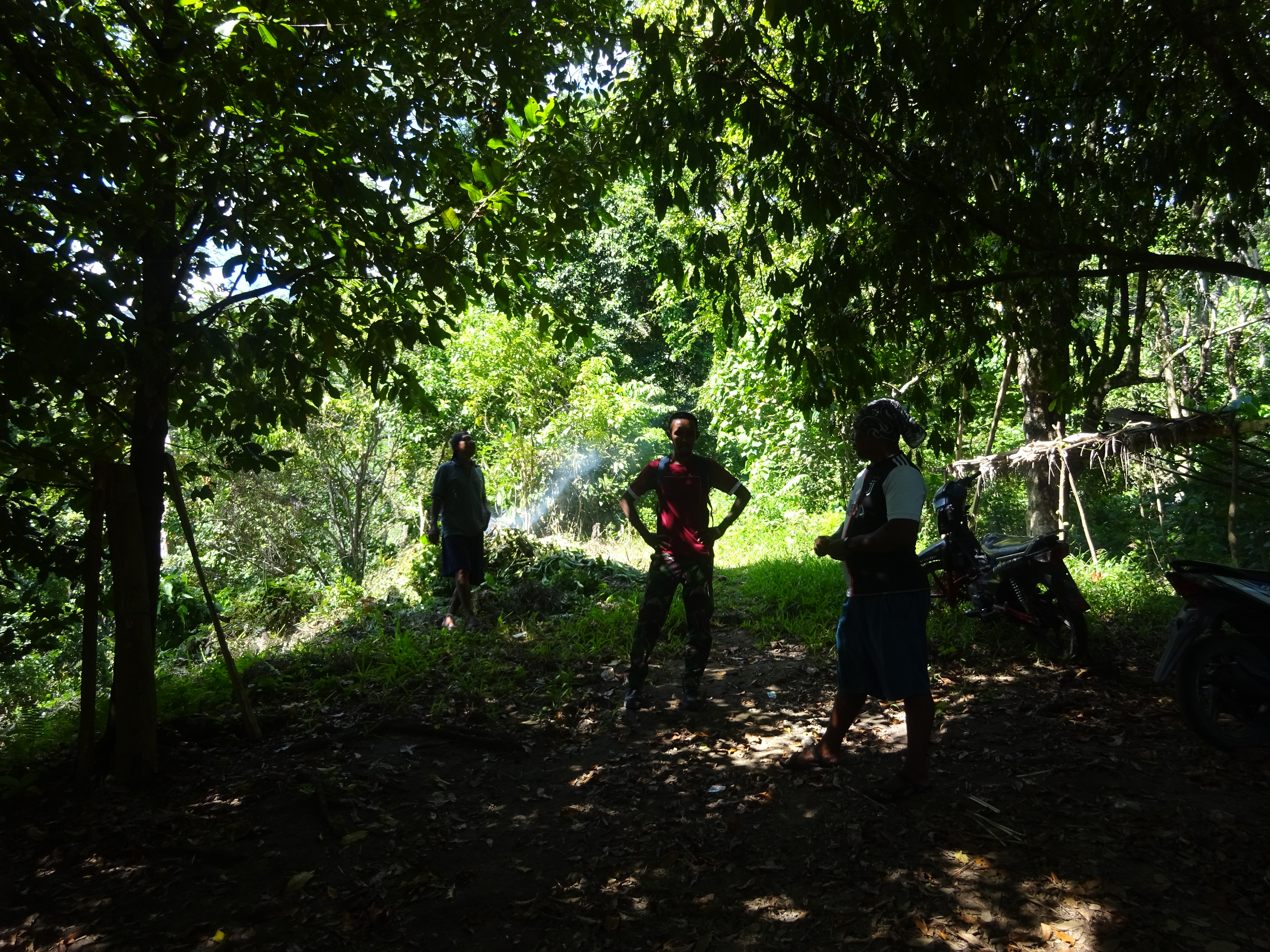 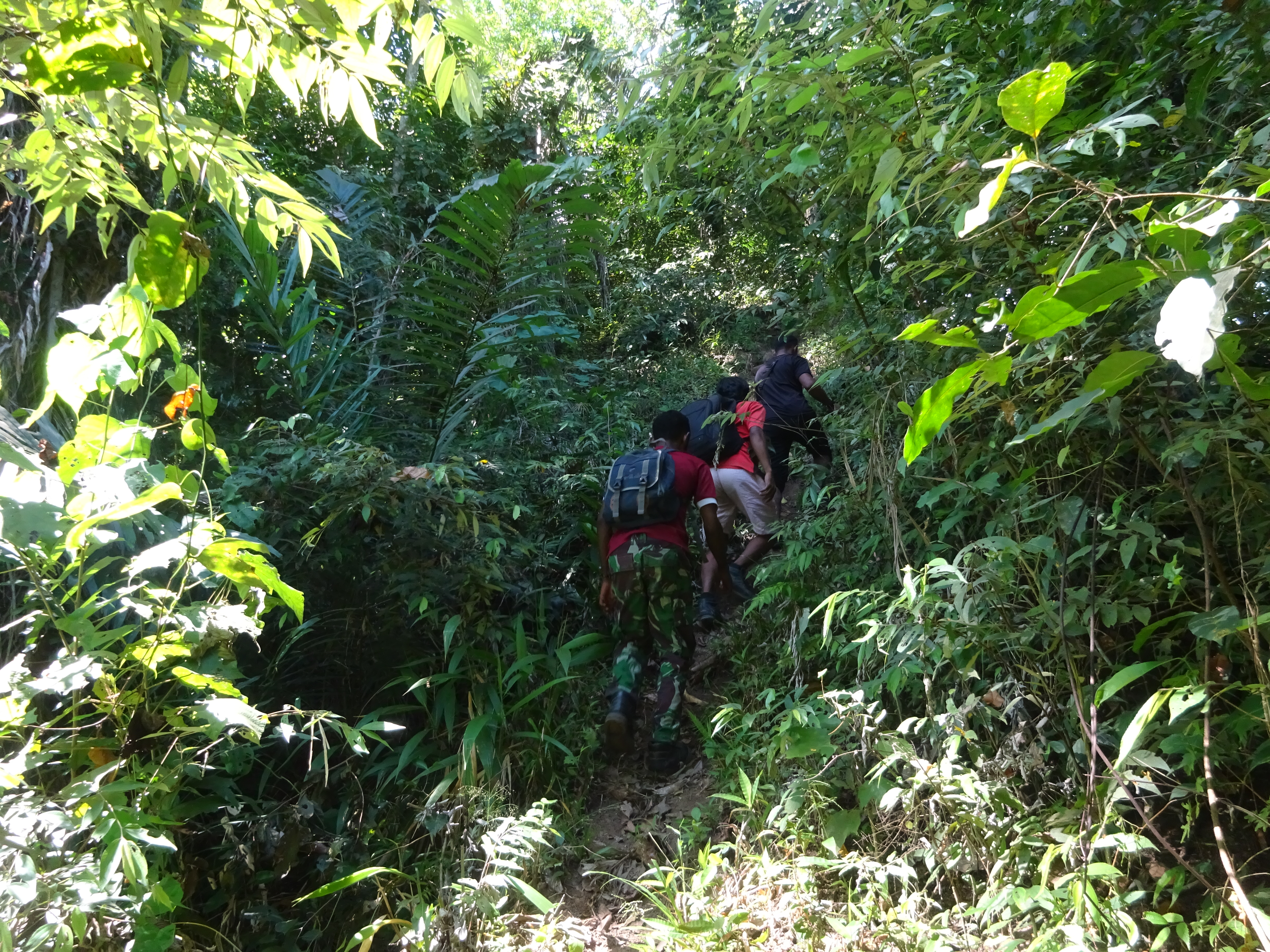 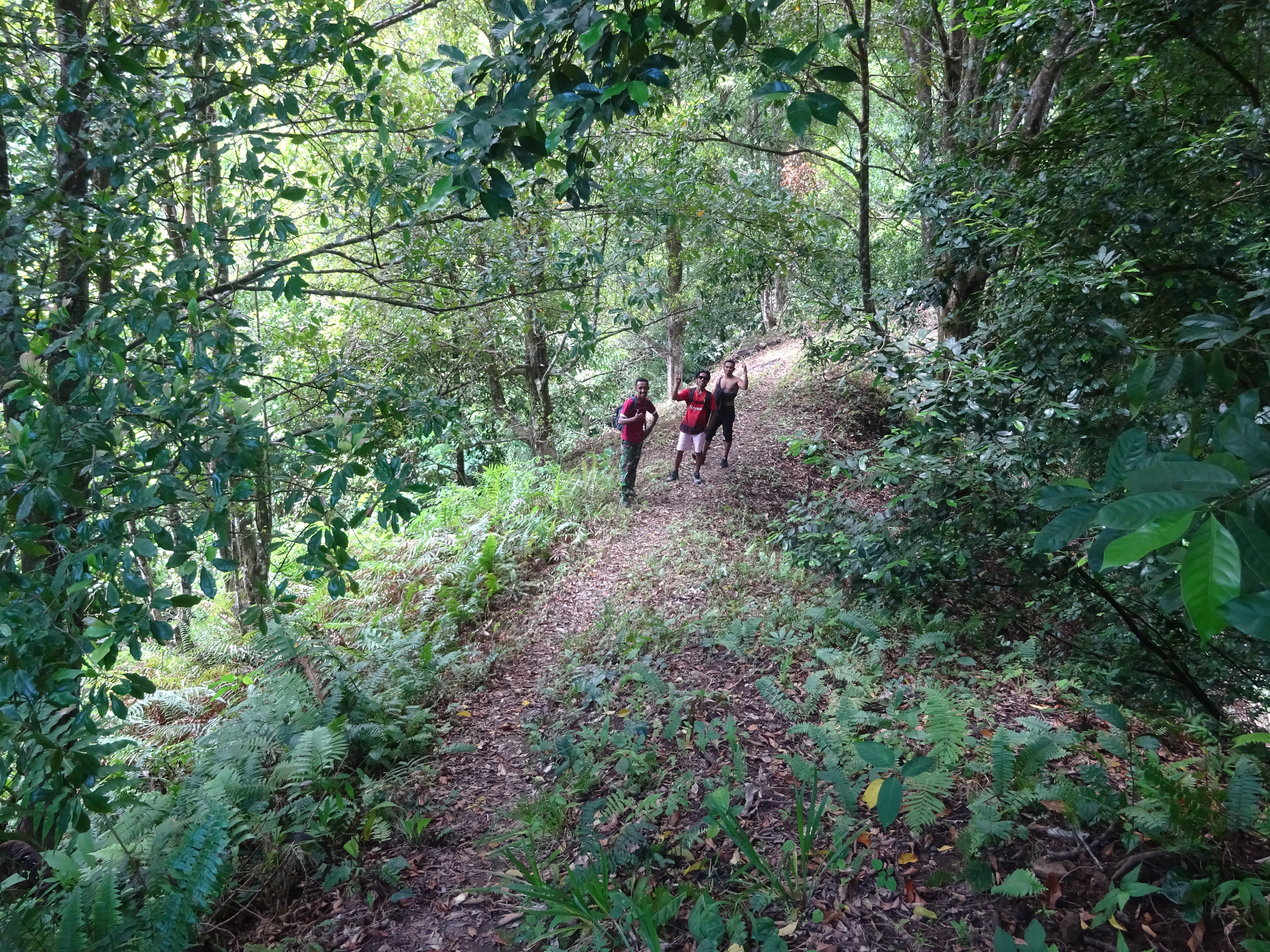 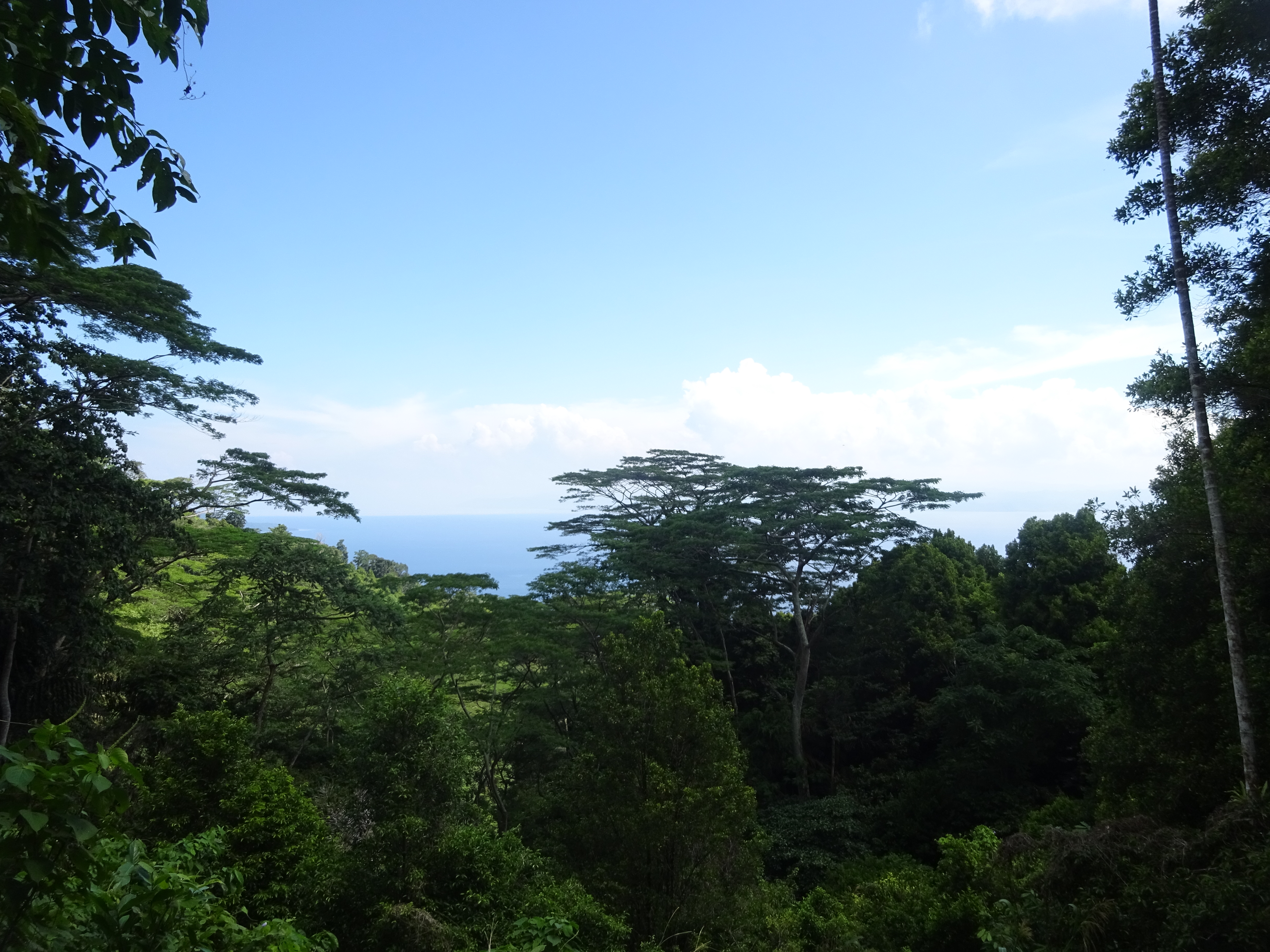 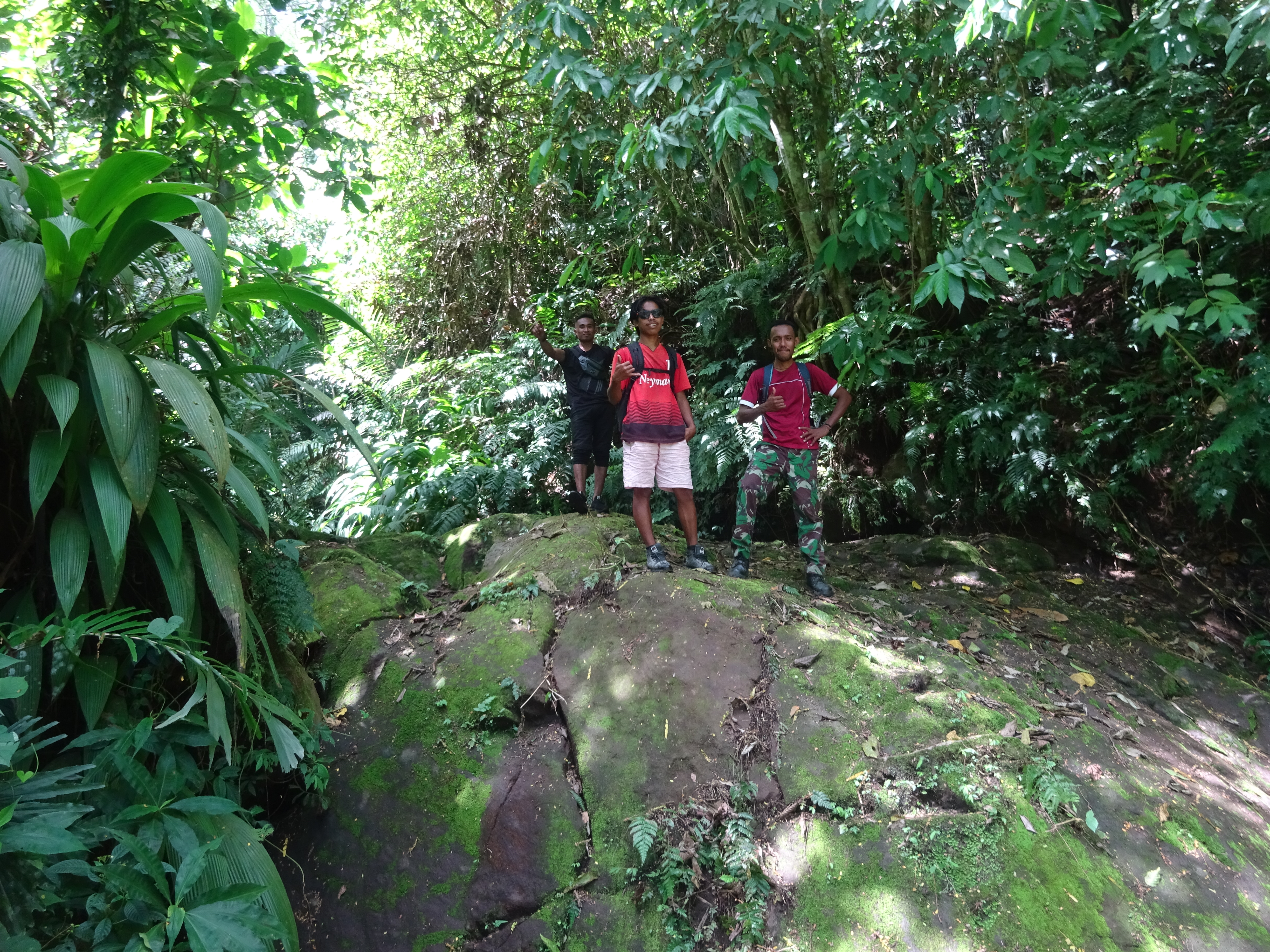 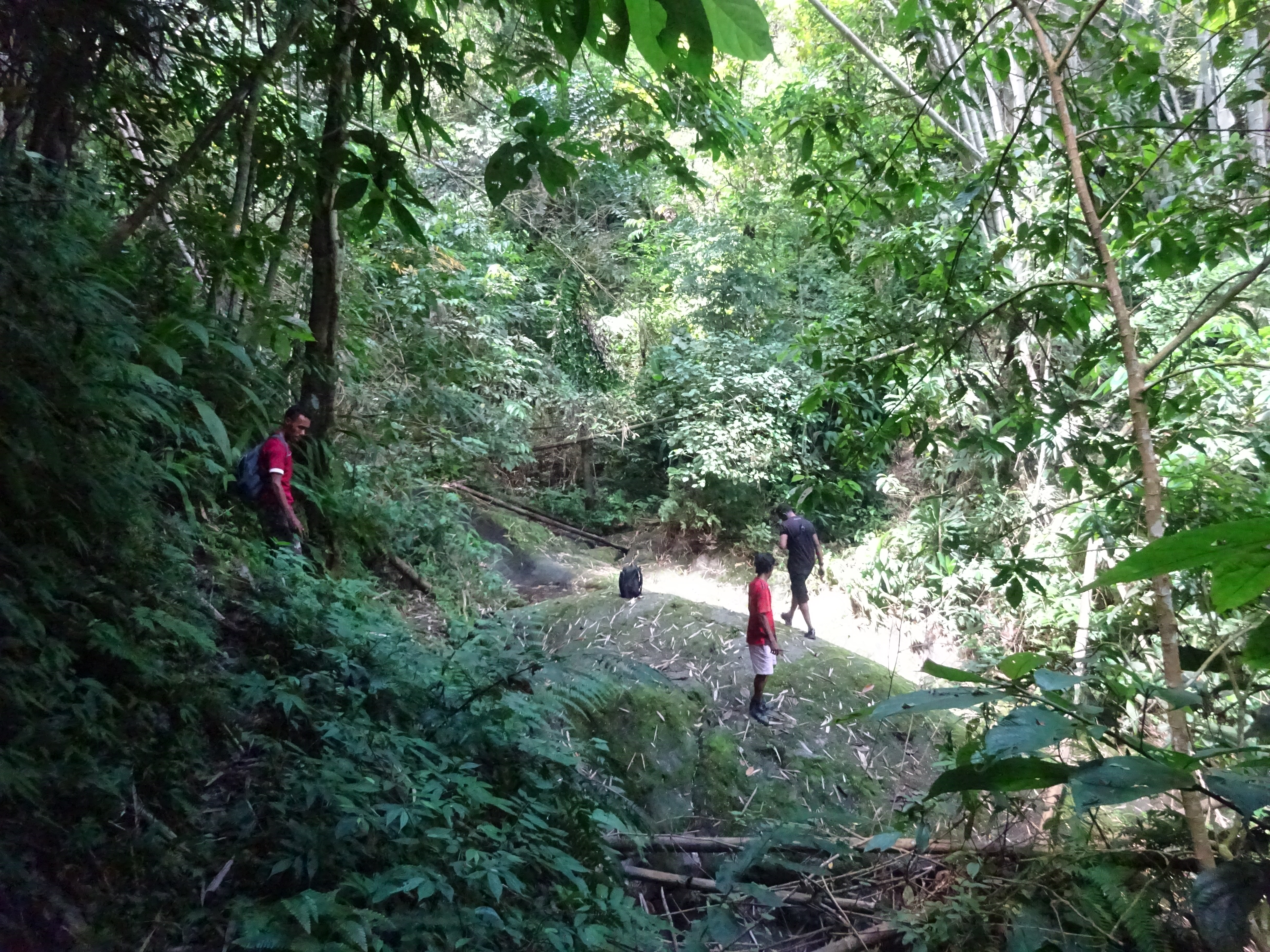 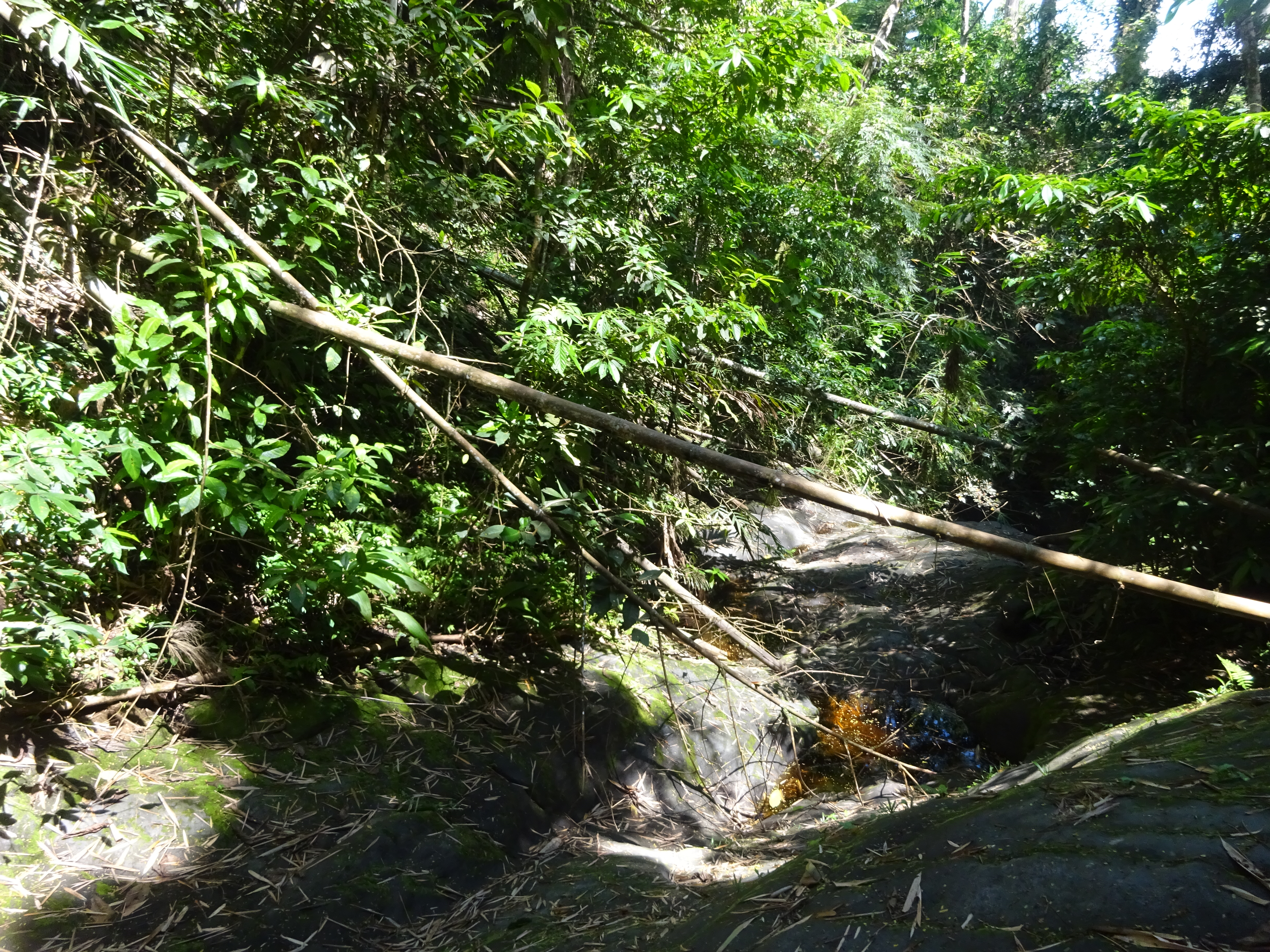 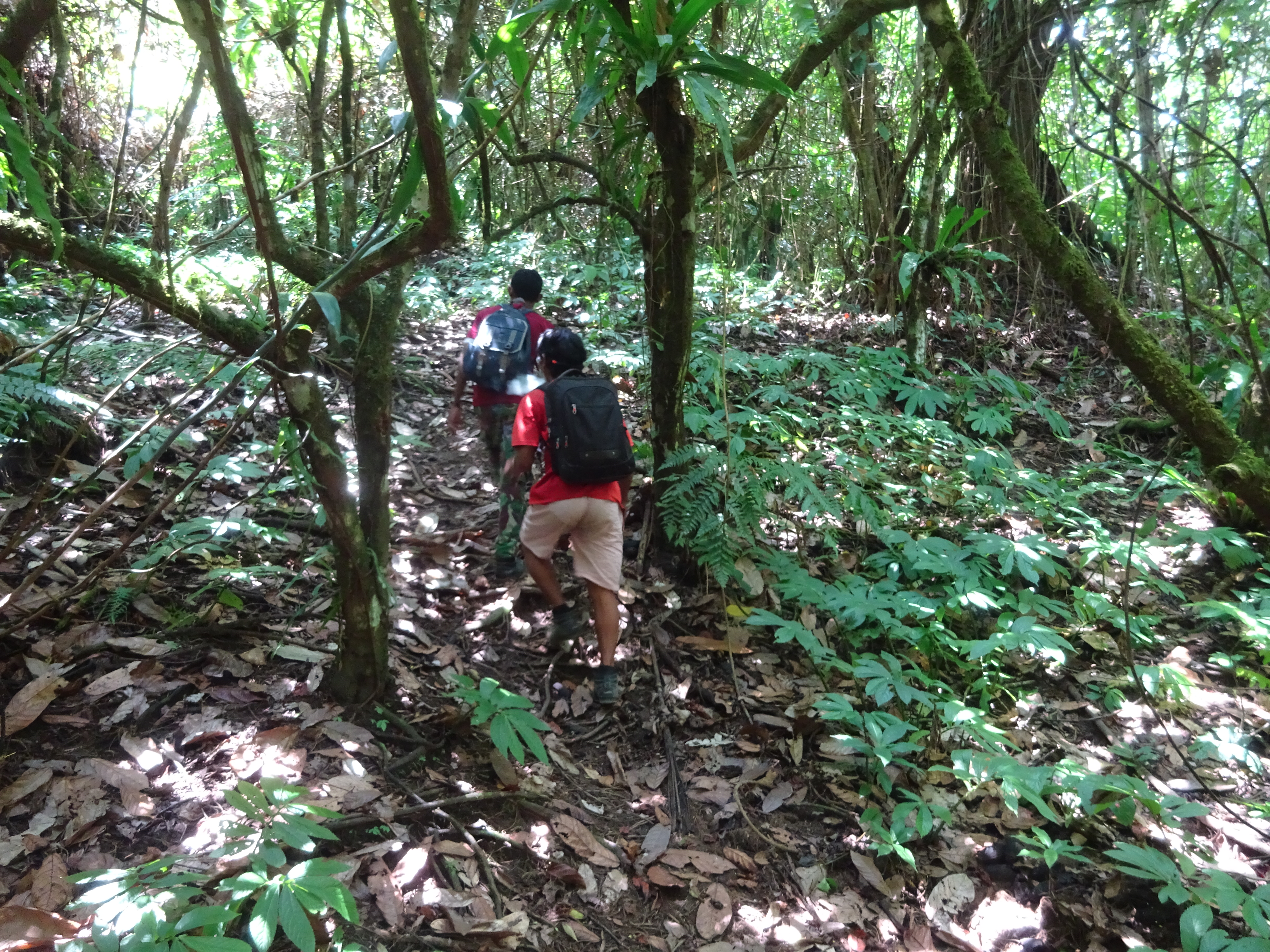 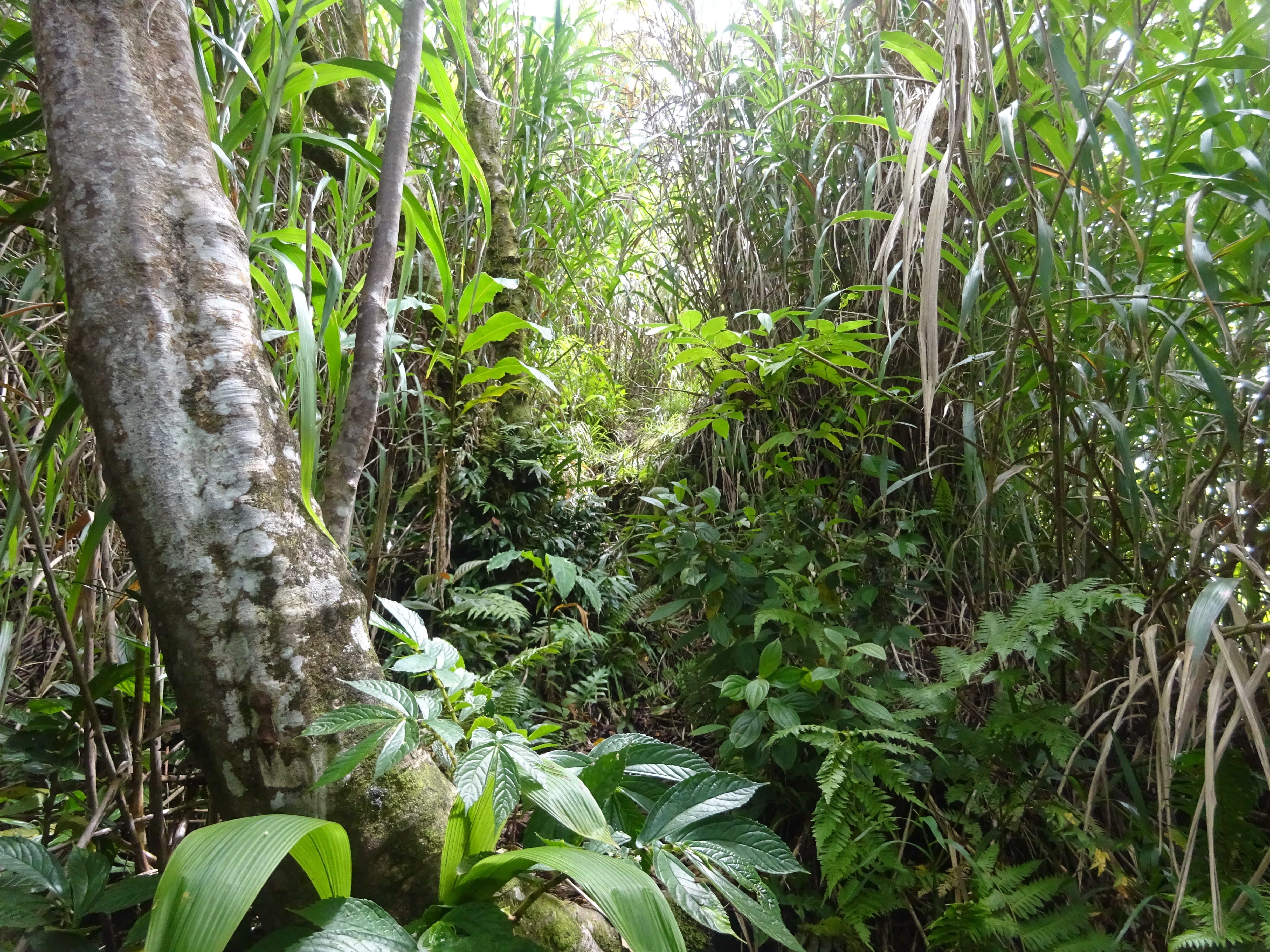 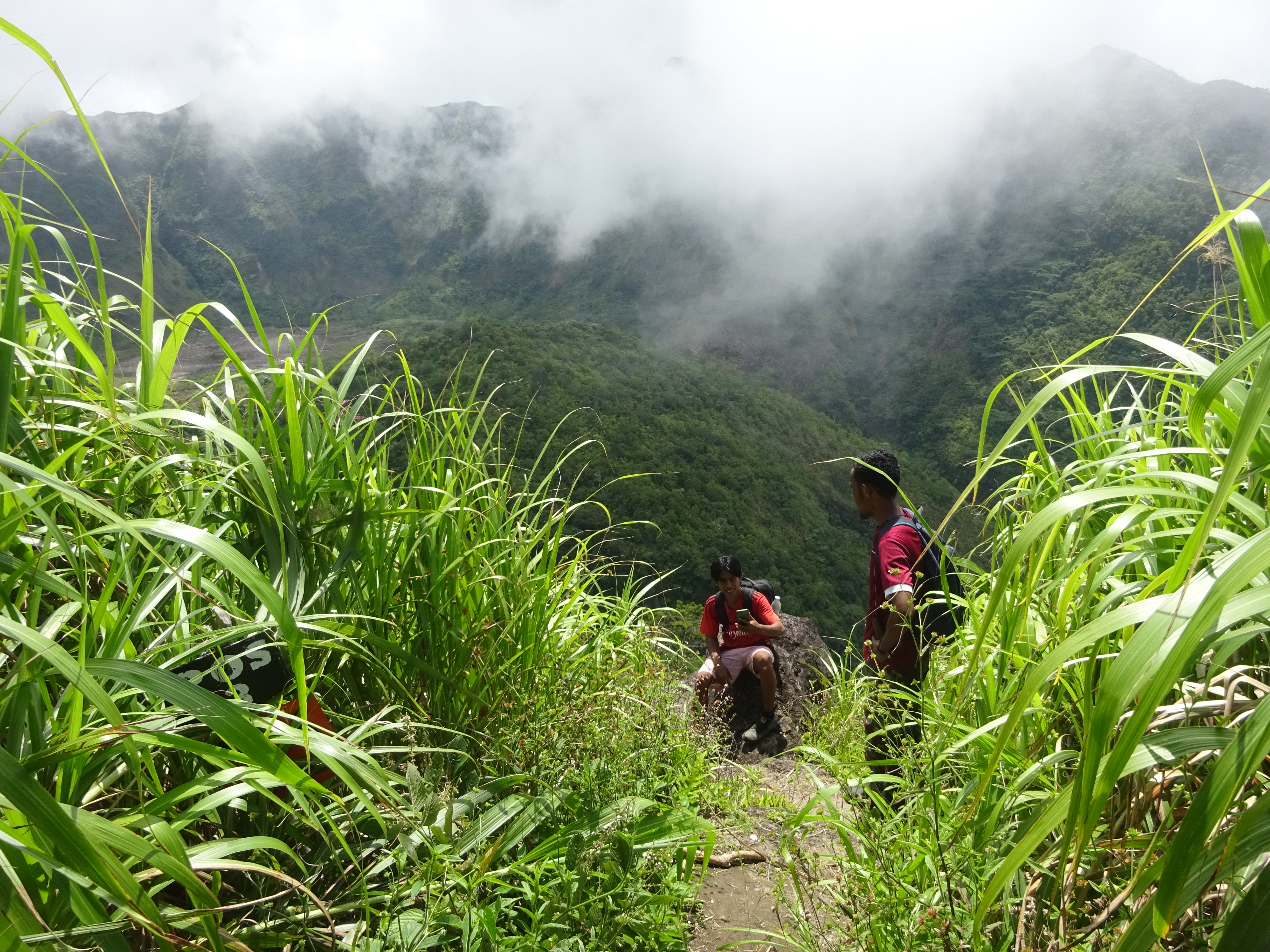 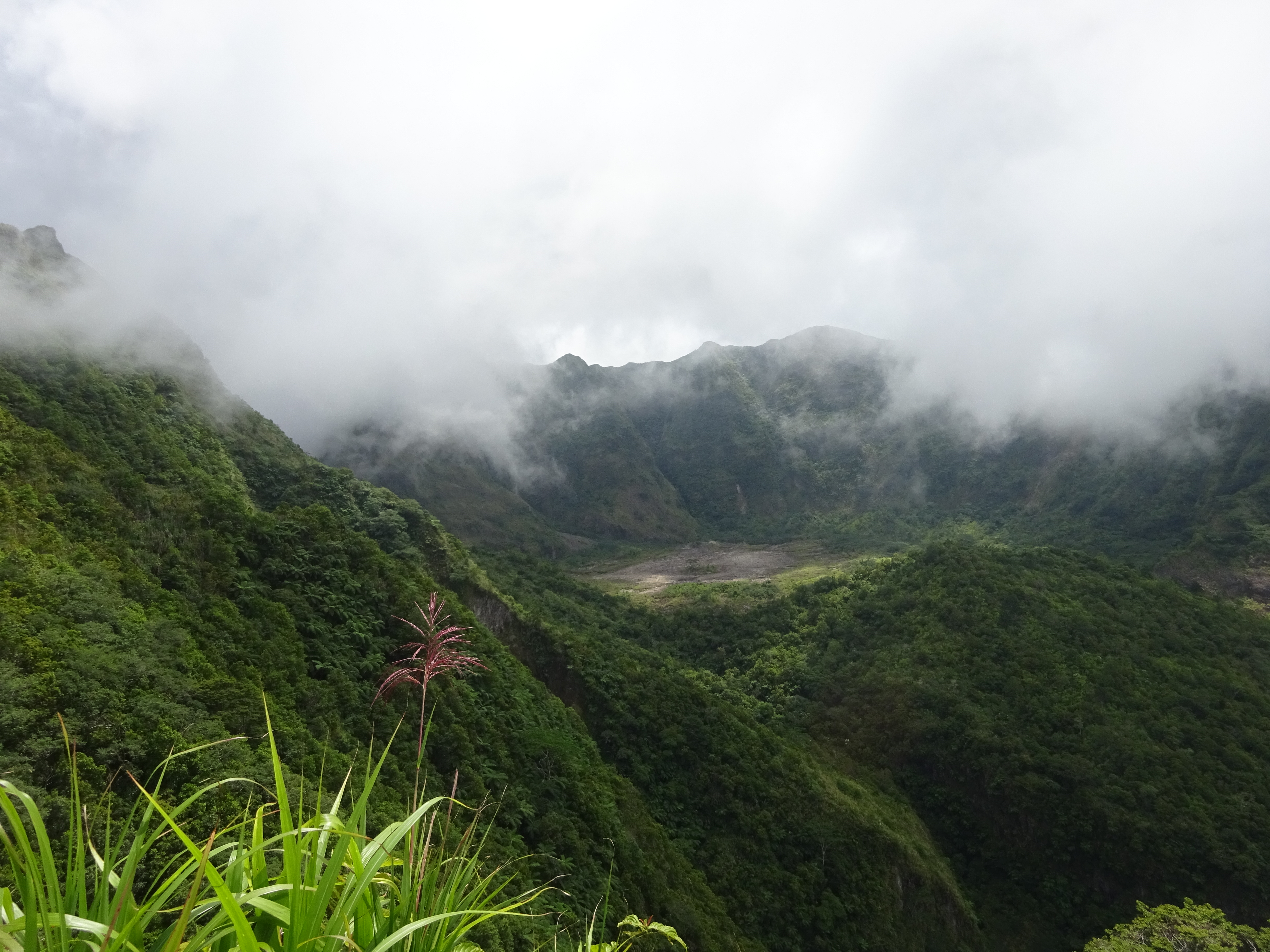 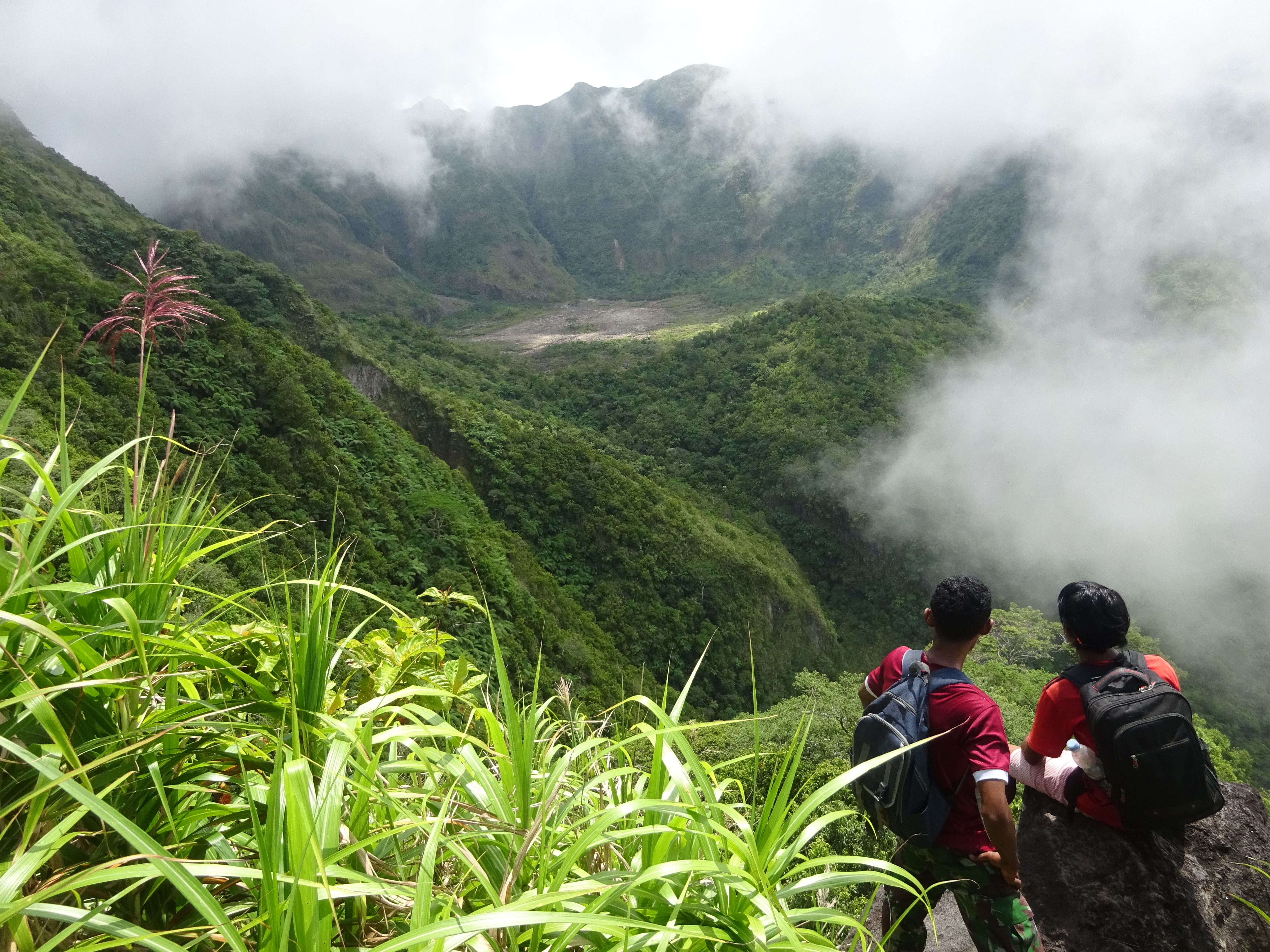 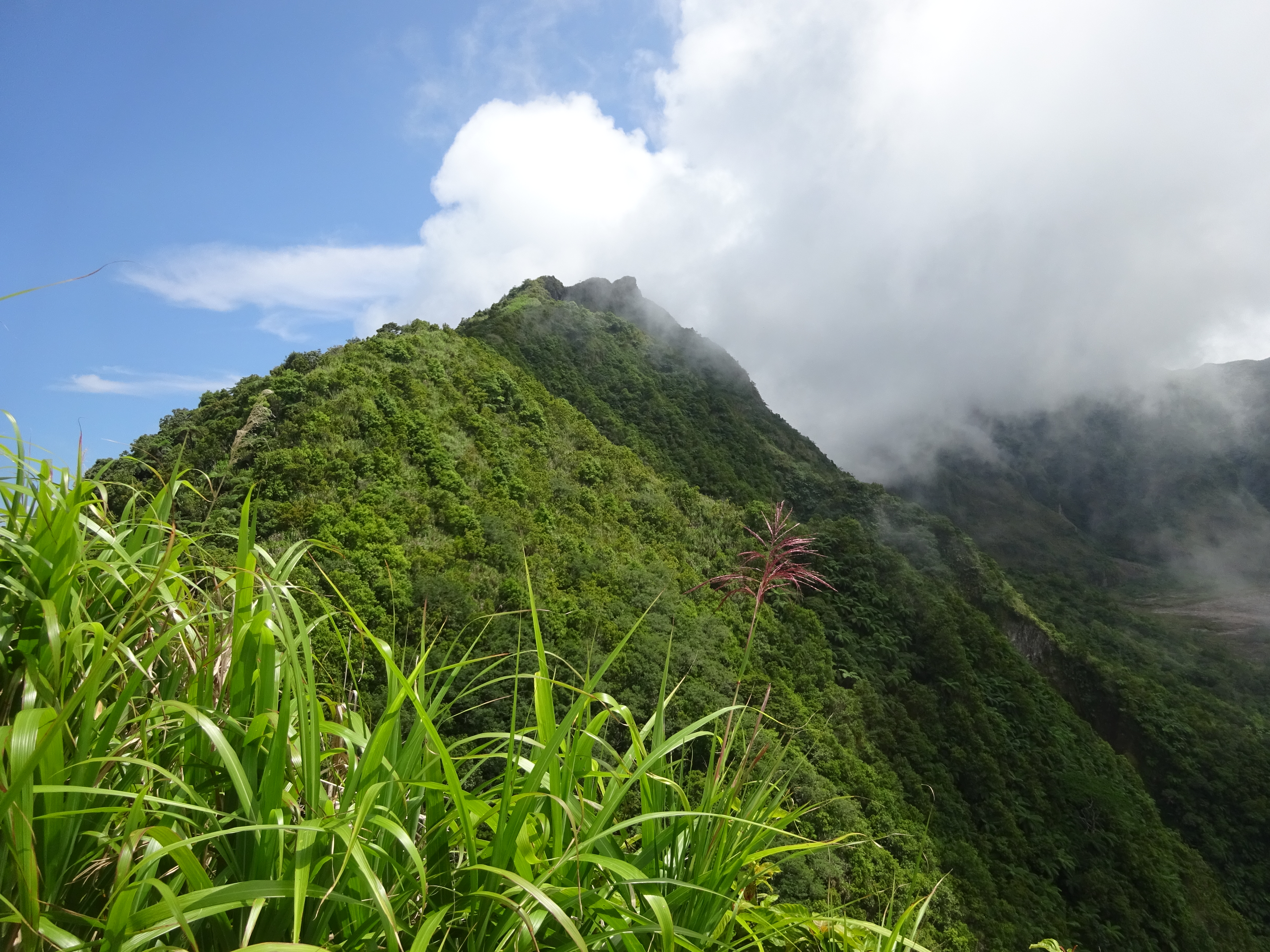 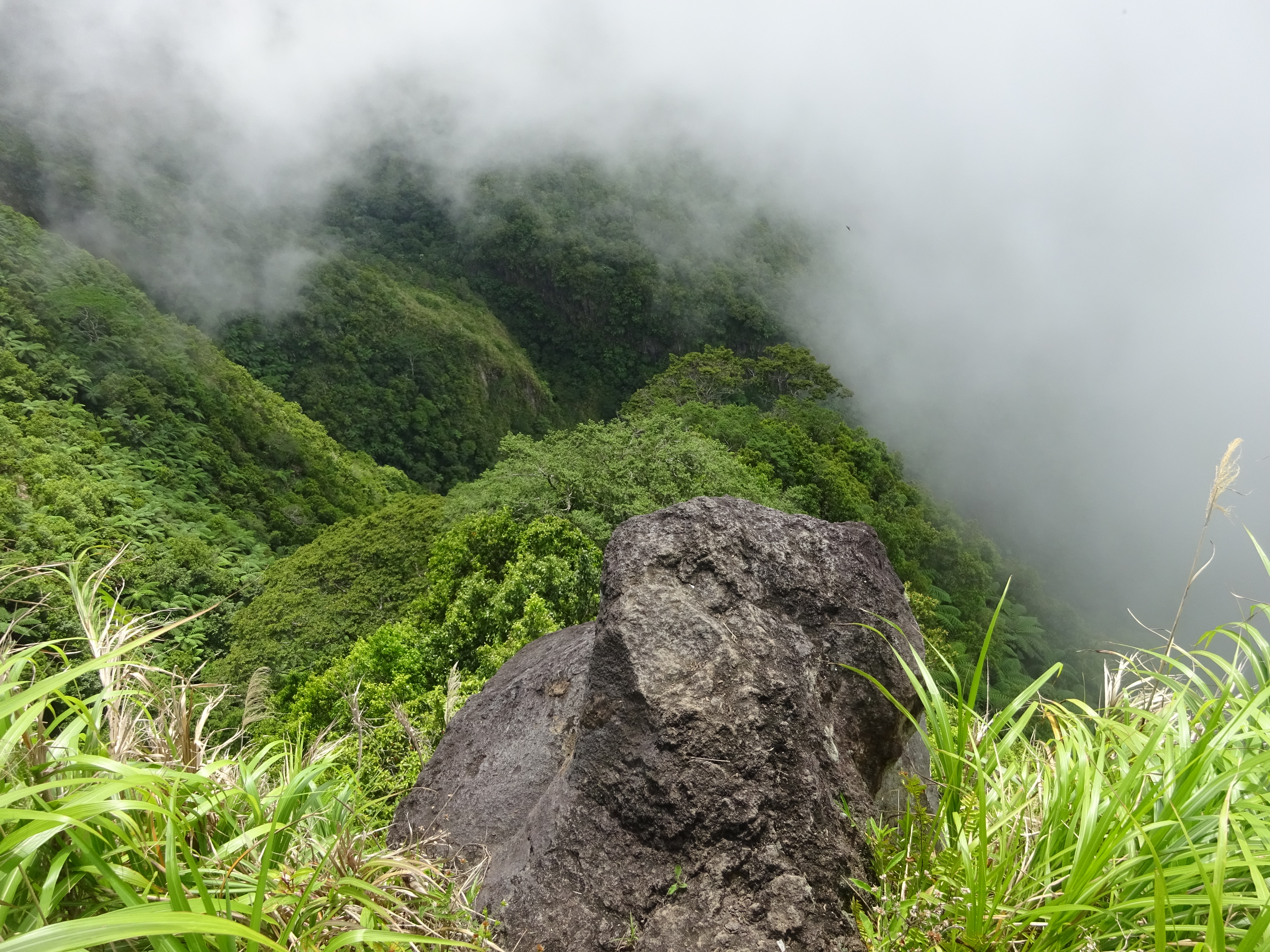 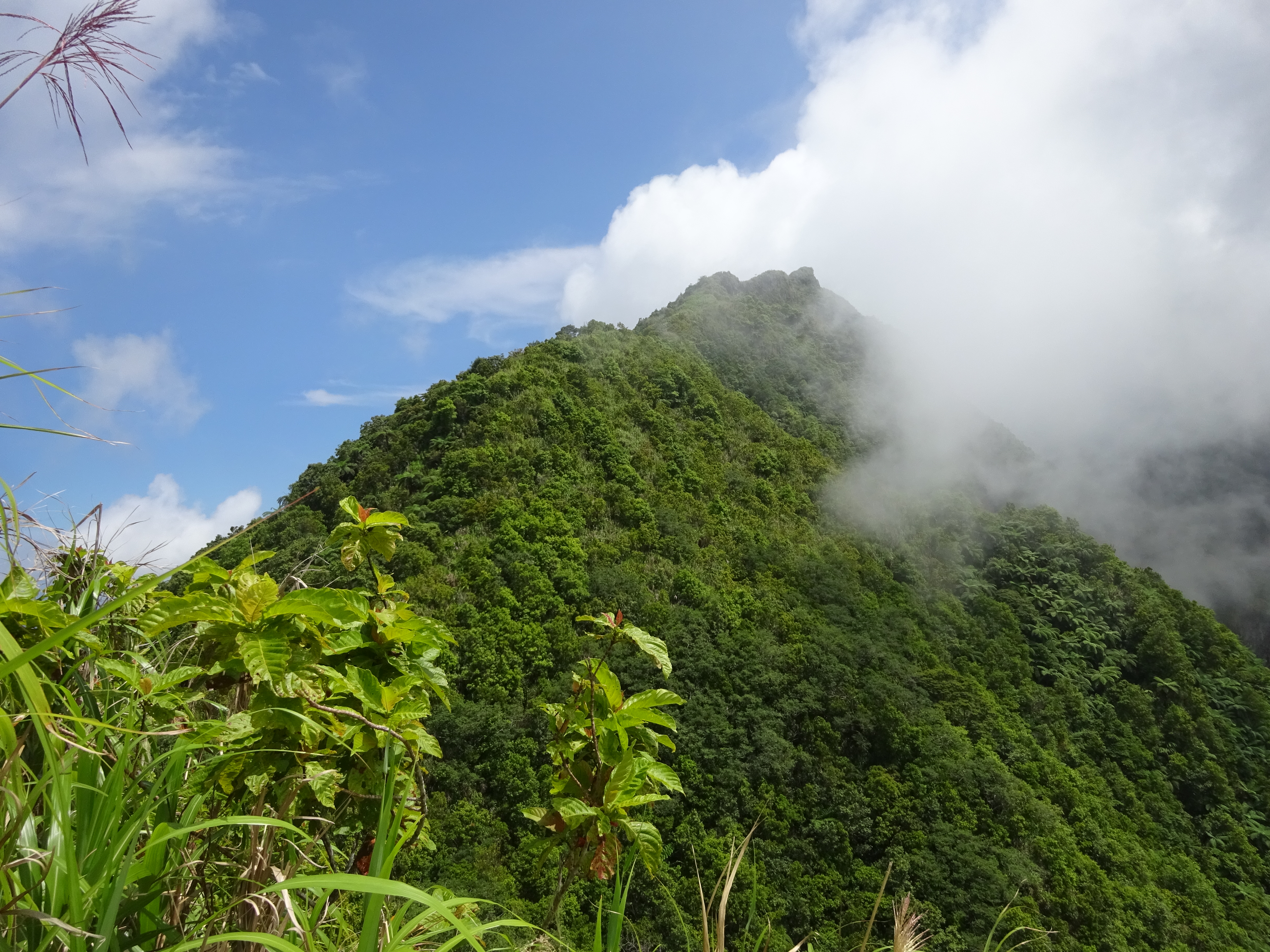 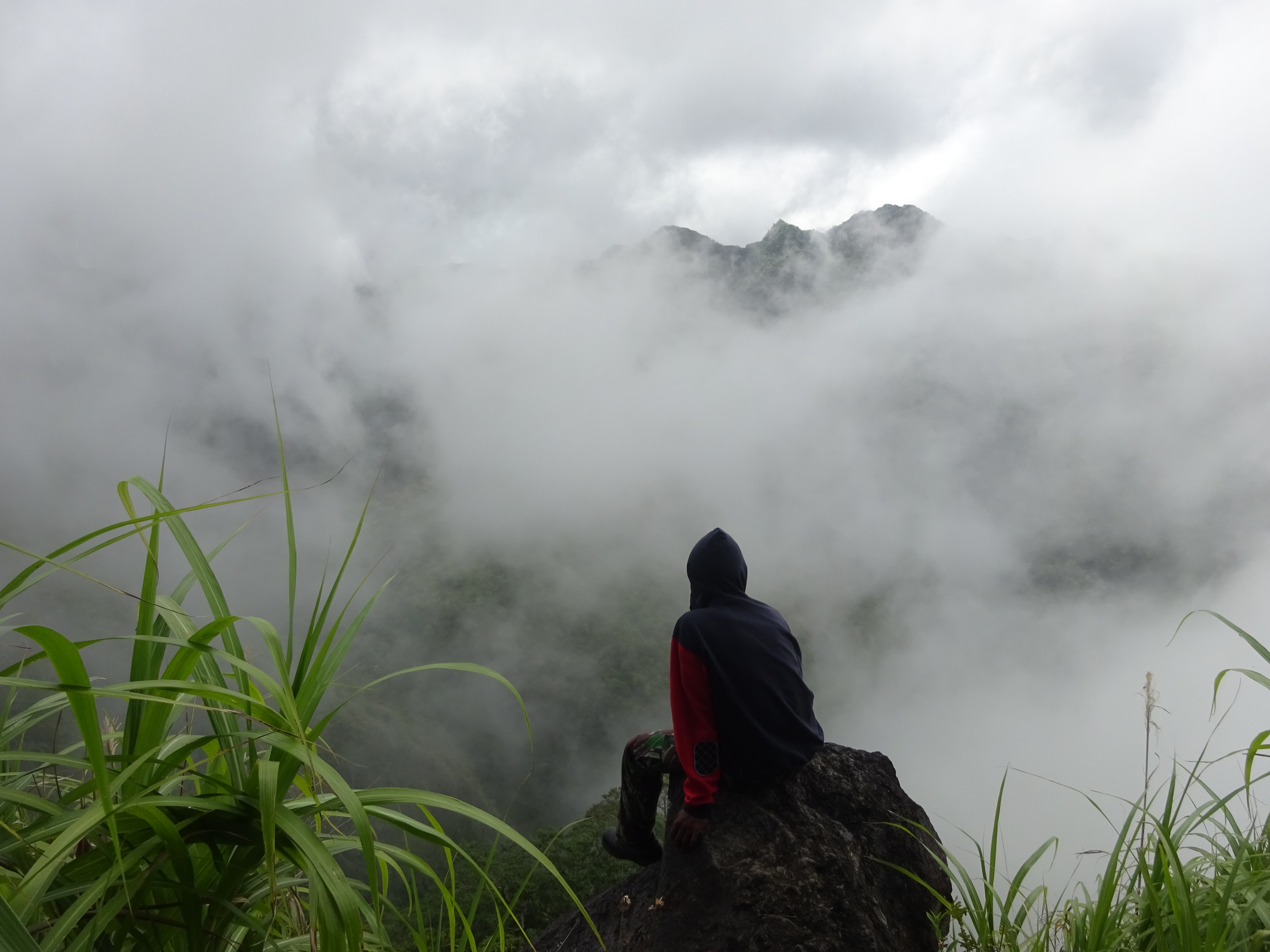 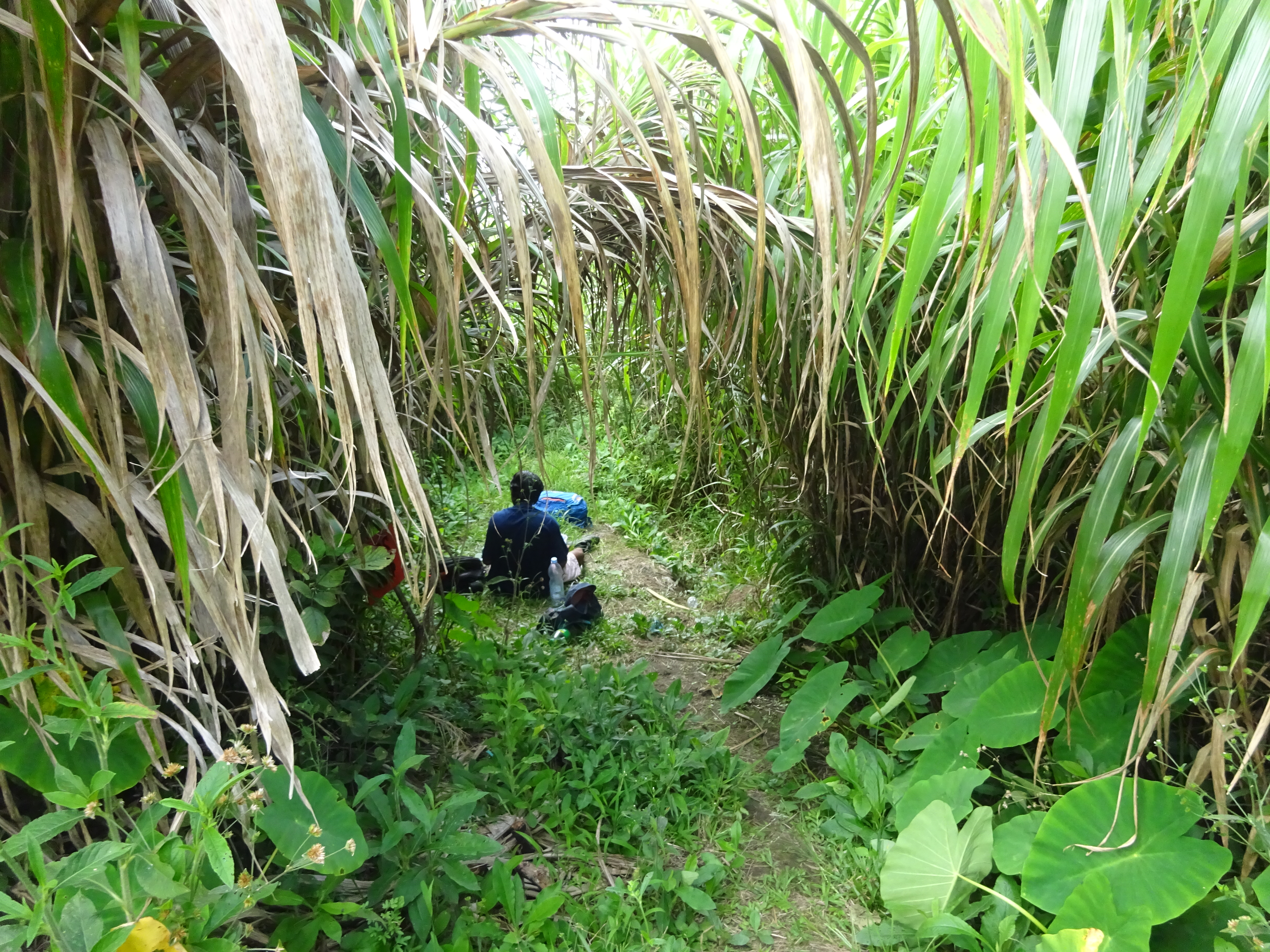 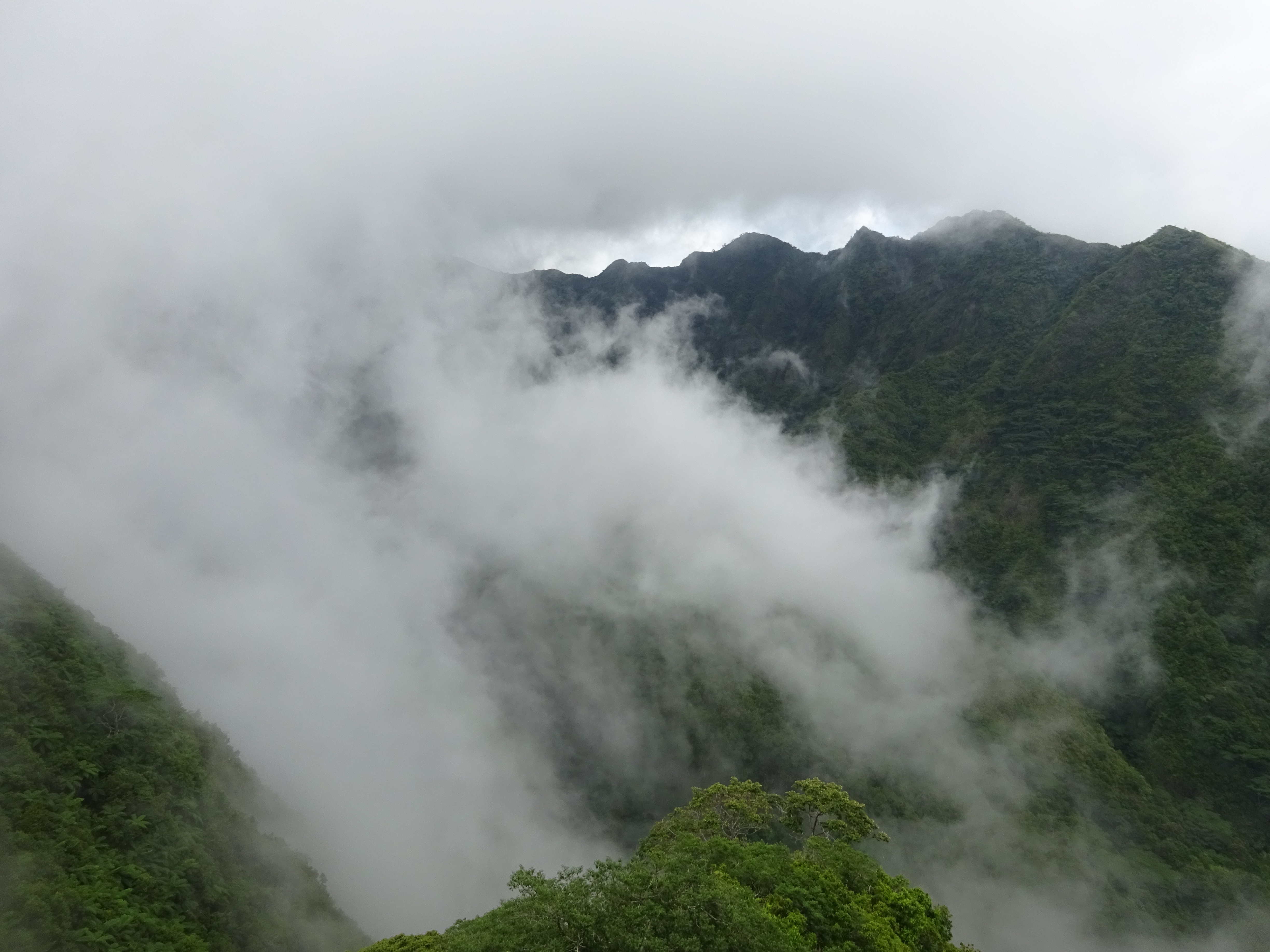 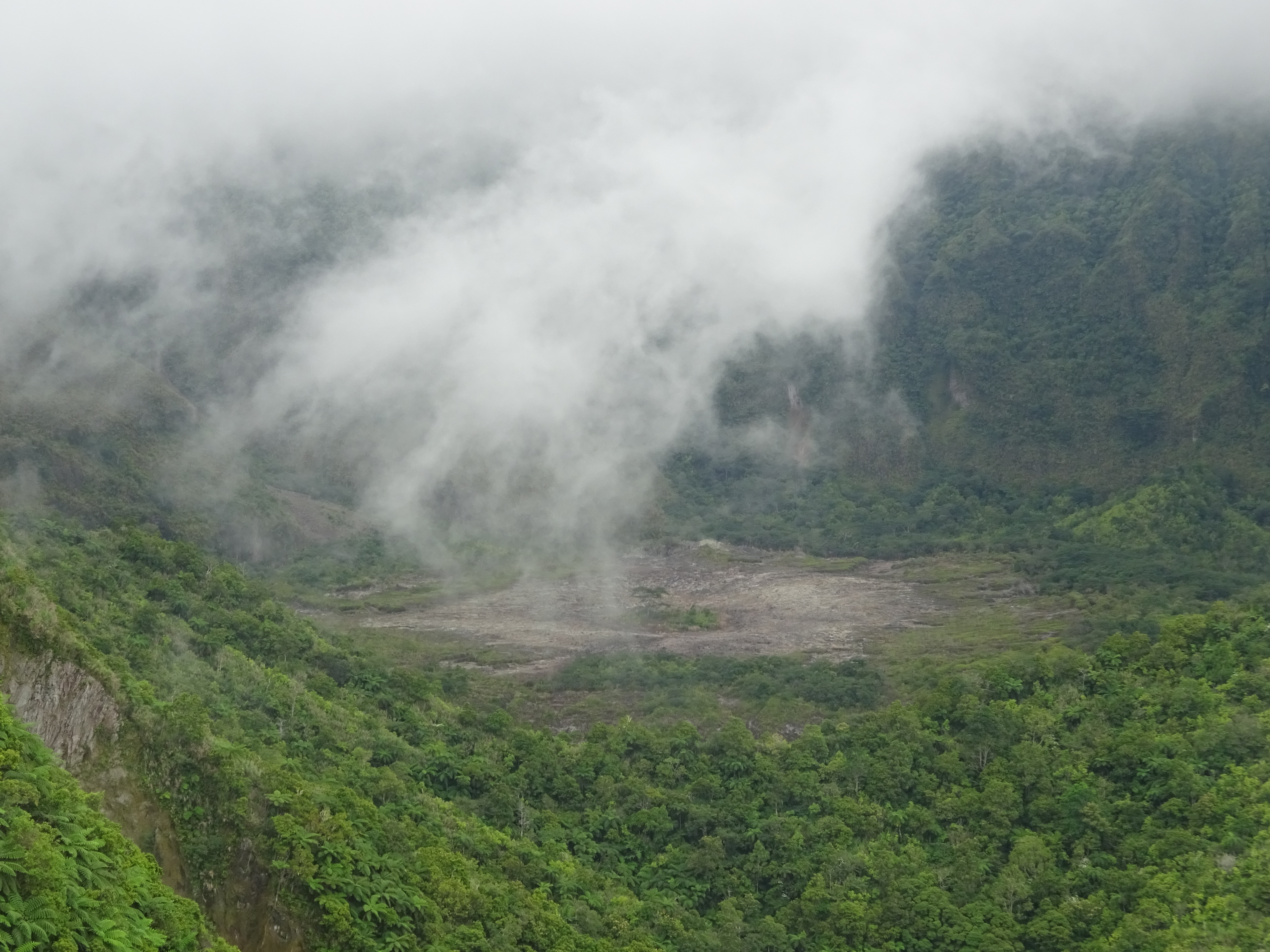 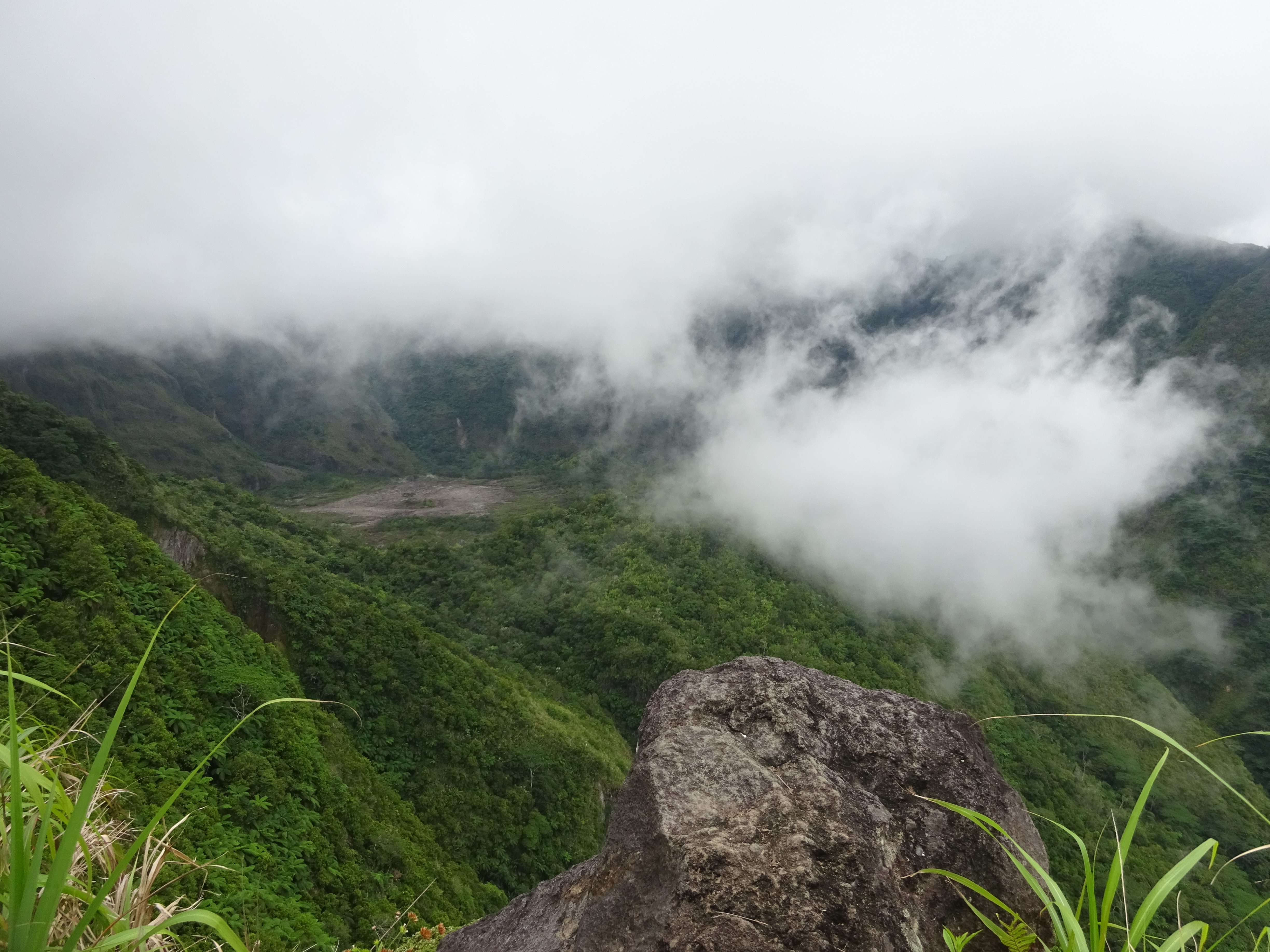 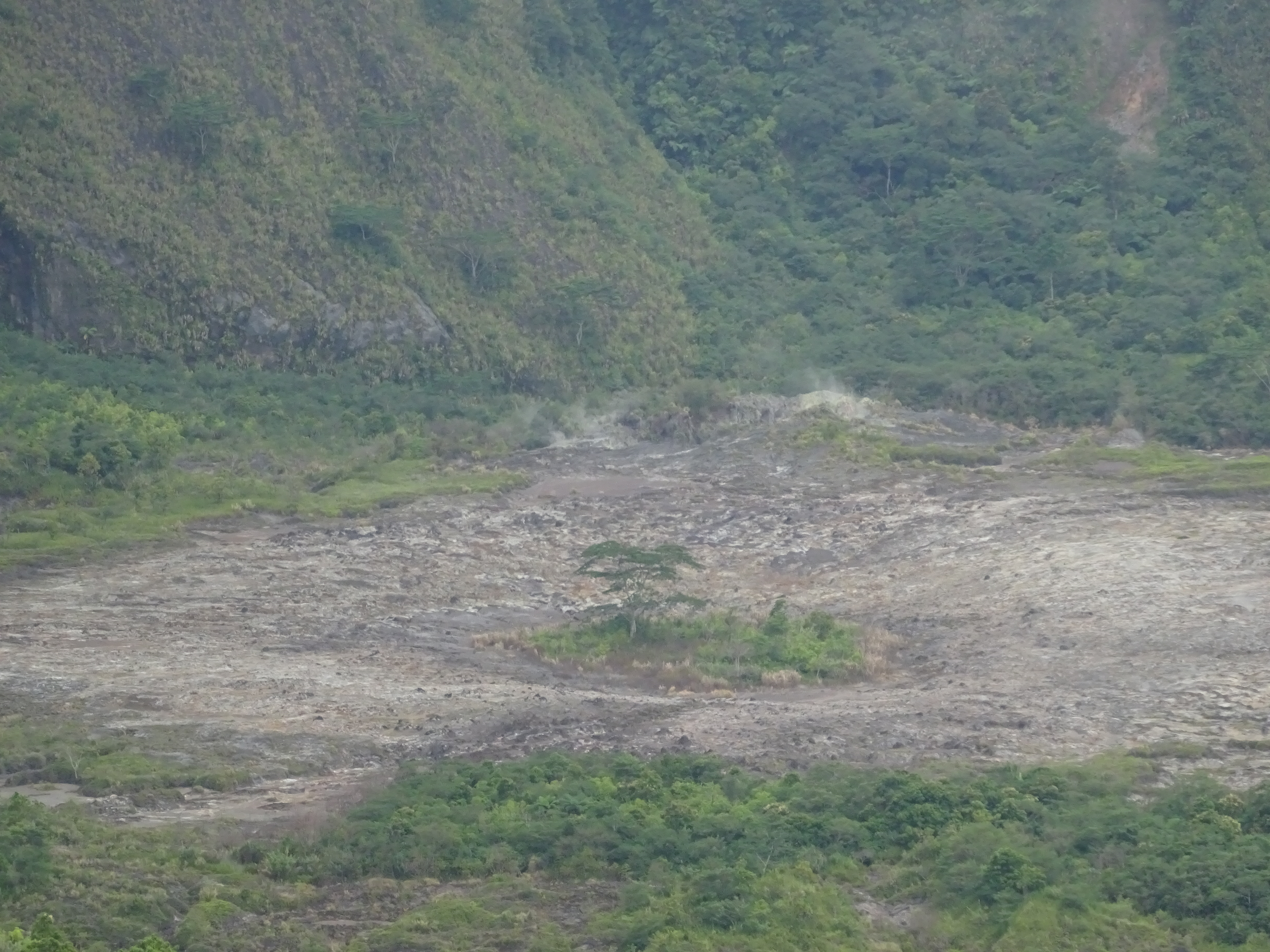 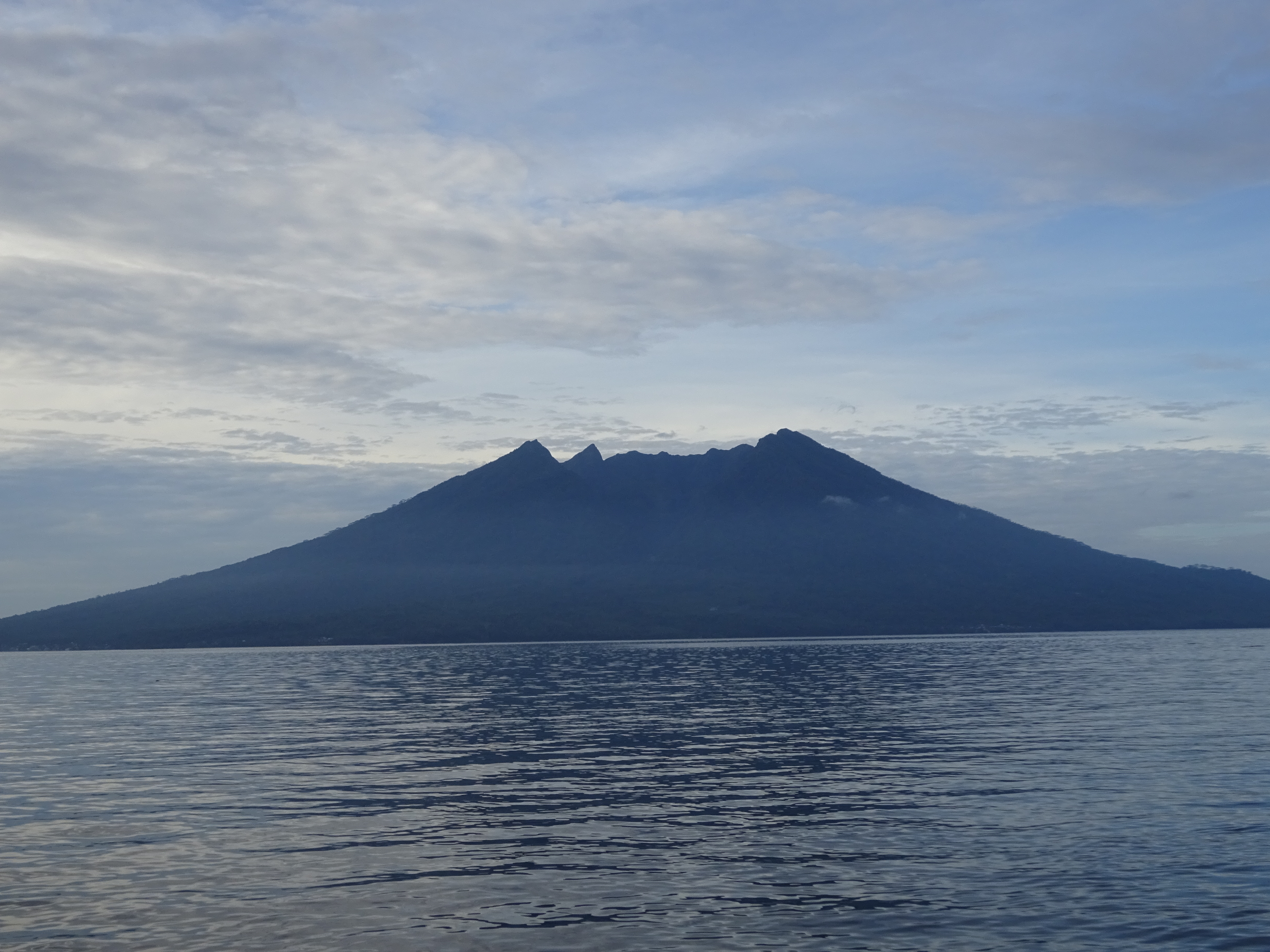 Gunung Kie Besi is the volcano of the island of Makian, which lies in the volcanic chain off the west coast of Halmahera – Ternate, Tidore, Moti, Makian and Bacan. Like Gn Gamalama (Ternate) and Kie Matubu (Tidore), Kie Besi dominates the entire island leaving only a narrow coastal strip and the lower slopes for plantations. Coconut, nutmeg and cloves are the dominant tree crops with some canari and cinnamon. Wild pigs are feared for their size and ferocity, and are known to have killed people working in the plantations. In 1975, fearing a major eruption, the government transmigrated Makianese to Kao in northern Halmahera. The resultant disputes over land between the Makianese and the local Kao people became the spark that fuelled intercommunal-religious clashes throughout Halmahera in 1999-2000. The 1988 eruption generated a 10 km high plume with pyroclastic flows.

Makian is reached by speed boat from Bastiong port of Ternate. The trip by a chartered ‘speed’ takes about 1.5 hours. Otherwise, regular public ‘speeds’ take longer stopping enroute at Pulau Moti, in which case you will almost certainly need to stay overnight in a homestay on Makian. There is no official accommodation on the island, but it will not take you long to be offered accommodation by local residents.

Like Gamkonora (Halmahera) and Kie Matubu (Tidore), the active crater of Kie Besi lies at the southern end of the volcano complex. Crater walls/ridges extend towards the north forming a valley with its opening towards the coast. Most Makianese know the eastern ridge as ‘Kie Besi’ and the western as ‘Solimongo’. Accordingly, if you ask for the true summit of Kie Besi they will refer you to a crag on the eastern ridge when, in fact, the highest point most likely lies on the southern end of the western Solimongo ridge.

Do note, however, that as is common in more remote areas, it is perfectly possible to hear two completely different opinions on the namings of the various peaks. Indeed, various maps offer various names on the range including Mailoa / Mailowa and Solimongo. And to add to the confusion, according to the US Army map, the highest peak at 1,357m is ‘G. Powate’.

The Indonesian Volcanology agency informs that there are two routes up the mountain: one up the Solimongo ridge from the village of Sibelai to the north-west, and the other up the Kei Besi ridge from the village of Gitang to the north-east. Gitang is by far the most popular starting point and if there is a route up from the other side at Sibelai, it is likely to be very infrequently used.

Permission for the climb can be sought from the Gitang Village Head (or in neighbouring Kyowor) but larger groups may first be referred to the local Kecamatan (sub-district) office as “the Kei Besi ridge belongs to the Kecamatan, not the village”. Permissions are readily granted and the Village Head will depute guides. Guides tend to be village lads who may be keen to practice their English with you.

Makian is known to be a hot island, even by Indonesian standards, and the fact that the trail starts in the east means that the typical morning ascent requires most folk to take more water than they might expect to need. Ojeks can be used as far as Pos 1 (278m) which is at the end of a cement path in the kebun / plantations and where the trail properly starts. Ojeks will save you over half an hour and mean that you don’t have to start all the way down at sea level.

The climb follows the usual routine for these mountains – plantations (to about 560 m) then forest to the crater rim (at about 1,033m). The trail is fairly steep but well defined for the most part. Two areas of slippery rock are passed early in the hike (at 436m and 523m) – the second is regarded as some local hikers as Pos 2, although there is some confusion as to the numbering with different hiking club signs using different systems! Both of these rock areas can be either bone dry, contain small pools of water, or turn into streams, all depending on the weather. An old cocoa plantation (‘kebun lama’) is reached at about 810m. This is also known as Pos Persinggahan, and is soon followed by what at least some hiking clubs regard as Pos 3 (912m).

The climb from Gitang to the crater rim is, in total, about 4.8 kms and takes about 3.75 hrs. Cane grass, ubiquitous to the interface between the forest zone and the bare upper slopes of mountains in Halmahera, covers the entire rim making it difficult to see the mountain and crater except from several viewing points. However, many people have climbed the mountain recently and a well cut/trodden path now exists through the dense cane grass.

Around 20 minutes beyond reaching the rim, is a small camp area (1,145m) which is by far the best camp spot on the trail although there are some fairly flat areas back down at Kebun Lama. There is also a large rock (1,150m) protruding over the crater rim offering the first views of the mountain/crater. The mountain becomes ‘holy’ at this point and no urination is allowed beyond here.

The view itself is already excellent. “The crater is impressively deep (at least 400m), sharply indented around the rim, open on the north side and mostly cloaked in green, except for a small zone of gently puffing fumaroles on the southwest flank.” (John Hargreaves). The ‘active’ crater is currently rather quiet. The area surrounding the vent shows the remains of a recent volcanic mound, about 600 m across, that had apparently build up but then failed to erupt.

Many hikers only hike as far as this point, in order to take photos at the viewpoint, and some guides may think hikers only want to come this far. The trail beyond is a little more overgrown as a result.

Beyond this point, due south, two crags provide even better views. The first crag is at about 1,300m and takes about another hour to reach through heavy cane grass. The climb involves a very steep pitch of some 10-12 meters achieved by pulling oneself up on live cane grass stems. These aids will be depleted soon so local ingenuity with surely find an alternate route or fix a rope. The second, final crag is marginally higher than the first and another 30 minutes beyond. This crag offers the best views of the mountain/crater, of Pulau Moti and of Kiematubu on the island of Tidore across the ocean to the north, and of, what we believe to be, the true summit. It is possible to descend into the crater area from the ‘Kie Besi’ ridge beyond the two crags but this requires camping one night on the mountain, either at the protruding rock (1,150m) or down in the crater itself.

There are at least two possible contenders for the true summit. One shapely, pointy peak lies on the southern end of the Solimongo ridge (Google Earth) and appears quite steep to climb. An experienced local climber/guide informs that an Indonesian university group has attempted it but failed. The other contender is the flatter section of crater rim to the south-west, as per the US Army map. The best approach to these higher peaks would appear to be from the ‘Kie Besi’ ridge, crossing somehow to the ‘Solimongo’ ridge near the ‘active’ crater and exploring from there. Some technical climbing would almost certainly be required.

The descent from the ‘Kie Besi’ ridge to Gitang takes about 4.5 hrs. 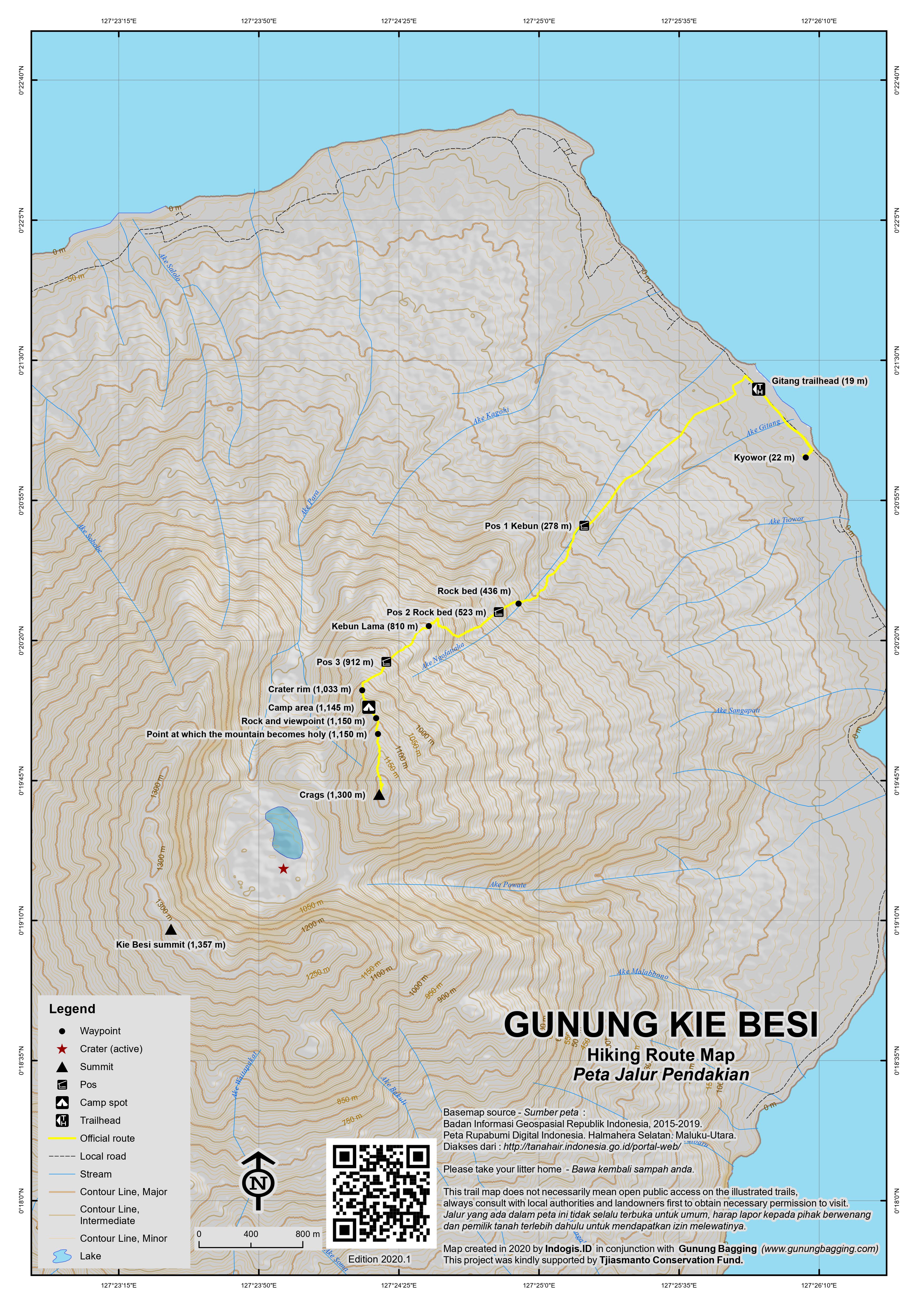