This vast volcanic range towers above the popular weekend destination of Cipanas, near Garut. Unlike most mountains in Java, much of the Guntur mountain range is remarkably bald, at least on first glance from Cipanas. The mountain range itself is incredibly complex, with a chain of different peaks from Gunung Cipanas above Cipanas all the way along to the vegetation-covered highest peak of Gunung Masigit. There are three very different craters across the range – a deep, vegetation filled crater at the Cipanas end, an active and dangerous crater and a shallow bowl-like old crater both of which are at the Masigit end. Given the complexity of the mountain range, there are two main approaches – from the Cipanas side (Cipanas or Kampung Citiis) or from Tanjung Karya near Kamojang geothermal area to the south-west of the range. The best approach would probably combine the two, but for those without a car it would take a long time to reach the Karya side by public transport. Both routes require a very long day to truly explore all that the range has to offer, so camping is well worth the extra weight on your shoulders.

Citiis (822m) near Cipanas is the most accessible starting point because the area has many hotels and lies just 3km from the main road from Jakarta to Garut. The word ‘guntur’ means ‘thunder’ and it is definitely true that the weather conditions can be fickle in this area. The volcanic activity going on inside the mountain has provided Cipanas with naturally hot water for many decades. The small town, comprised mainly of simple hotels for local people to stay during the weekend, lies at the foot of the mountain and the delightful warm water simply flows down through it.

From Kampung Citiis, where there is at least one basecamp, a trail leads via the local waterfall Curug Citiis (1,154m). The grassy, open terrain makes for an unusual hike by tropical Indonesian standards and one where you need to be extra careful about covering up and taking plenty of water with you.

There is very little shade indeed so it is best to start before dawn if possible. It takes about 3 hours to reach the first crater (which most people think of as the hiking objective) but the highest point of the mountain and the other craters are nearly 2 hours further along the ridge. There is rarely any water to be found on the route from Citiis so take enough with you.

Before long, you should be able to admire both the huge dormant cone of nearby Gunung Cikuray, the smoking Papandayan volcano and in the distance the large mountain massif of Galunggung (Beuticanar).

The first crater is the deep and impressive Gunung Cipanas (1,935m) which most local people actually know as ‘Gunung Guntur’. Apart from a bit of sulphur smoke on the north side of the rim, the area seems quite placid – the crater floor is filled with dense plant life.

Above the crater you will see what appears to be the grassy summit area where many local youngsters camp. To reach it, follow the edge of the crater (anti-clockwise) and up onto the top (2,059m). There are three monuments here plus a small pit with hot volcanic rocks. This is about as far as the majority of hikers go and is what most locals guides regard as the ‘puncak’ (peak).

However, in clear weather it is obvious that the highest point lies much further beyond. Descend to the col between the crater peak and then up to a second grassy peak (2,135m and known as Puncak 2). This second peak is more obviously active than the crater area – the ground is hot and there is a considerable amount of sulphur gas drifting across the top – so take extra care here. Beyond this peak is another, steeper drop and another ascent up to higher ground.

This spot (2,170m) is the start of Gunung Masigit. The first section is very flat rock – remnants of an ancient lava dome. There are also a few graves in the area although nobody is sure just how old they are. Beyond the flat rock is the edge of the forest but beyond here is now designated as a Cagar Alam meaning you now need special permission to go beyond.

It’s a great spot to camp as it’s a good viewpoint for sunrise. To reach the very highest point takes just over 30 minutes from the point at which the trail enters forest but it requires special permission such as for conducting research on flora or fauna. There are several paths at this point, many of which are marked with red tape, so take care if you do continue.

If you carry on to the right, the path goes past the remains of a cement structure before descending down to the right to very active crater cliffs. It’s an unexpected scene – at least comparable to a smaller version of Salak’s Kawah Ratu – and is well worth a visit. Camping down here is probably not a good idea given the gases and the steepness of the terrain. In good weather you should be able to see the very highest point of the mountain range on the far west side of the crater (don’t follow the trail down past the crater leading to a distant northern peak with steep cliffs as although it looks impressive it is slightly lower in elevation and it is not certain that there’s a trail up it). You cannot reach the true summit from down here so you have to climb back up to the old Masigit lava dome area.

To reach the true summit from the lava dome/edge of forest/graves/camp area, follow a trail down slightly to the left to a small grassy alun-alun area. From here, you must follow a vague trail which leads up to the right onto the top of the summit ridge (which has a couple of small rocky outcrops on it). From the top of the ridge, the path is incredibly faint but follow the ridge round until you reach the highest point.

Down to your left is an ancient, dormant bowl-shaped crater area, where Javanese Edelweiss grows. If you look to the right of the summit ridge, and back towards the lava dome, you will be rewarded with wonderful views down to the active crater and beyond to other mountains including Cikuray and Beuticanar in the distance. The vegetation is not too dense, so in good weather it’s a great place to sit and enjoy the panorama.

Another, less often used, route to the mountain range starts in Tanjung Karya, near Kamojang, which is much harder to get to using public transport. Once in Kamojang village, you should be able to arrange a guide (which is necessary for this route) at one of the warungs. While you are there, the various geothermal wonders at Kawah Kamojang are well worth an hour of your time. From Kamojang village, charter an angkot (Rp 50,000) to take you the 30-minute journey to Tanjung Karya (1,063m). To get to Tanjung Karya, take a left turn under yellow and blue arches at Suka Karya. From here, follow the plantation trails up the valley. The Guntur/Masigit mountain range is on your left. In the distance you will be able to see the, steep bald face of the mountain. After less than two hours of gentle walking you will reach two camping huts surrounded by ponds and places to bathe. This place is Cikahuripan (1,403m), and is a popular retreat for local youth groups at weekends. It’s a great viewpoint for Cikuray and Papandayan and the valley between them.

From Cikahuripan, the trail leads straight up the side of the mountain. Keep your eyes out for eagles as there are lots of them in this area. There is also a waterfall further up on the left of the trail though it cannot be reached from the path. The path is very clear although there are a couple of hundred metres of black volcanic gravel which is great to descend on but tiring to climb on. Further up, the path enters taller vegetation, but there are orange/red tags on trees to help you navigate. Finally, you will reach a grassy, open area (2,057m) where people often camp and which is the col between Puncak 2 and the graves.

There is also a trail up from Cibeureum (1,602m) which is north of Tanjung Karya, but this is now unofficial and not used by hikers.

Lying roughly between Cikuray and Galunggung, Gunung Karacak is usually approached from the Garut side near Karacak Valley camping area at Margawati (1,150m). It is not a popular hiking destination due to the higher peaks in the area, but the highest top in the Karacak range is only around 2 kilometres east of Karacak Valley. The slightly lower eastern top is 1,832m according to the Baksurtanal map, and a quite separate summit a further kilometre or so to the east is labelled Gunung Puncakgede (1,820m) with a further un-named eastern top (1,785m). A return hike from Karacak Valley to the highest (western) peak can be accomplished in half a day. We hope to explore this mountain later in 2020… 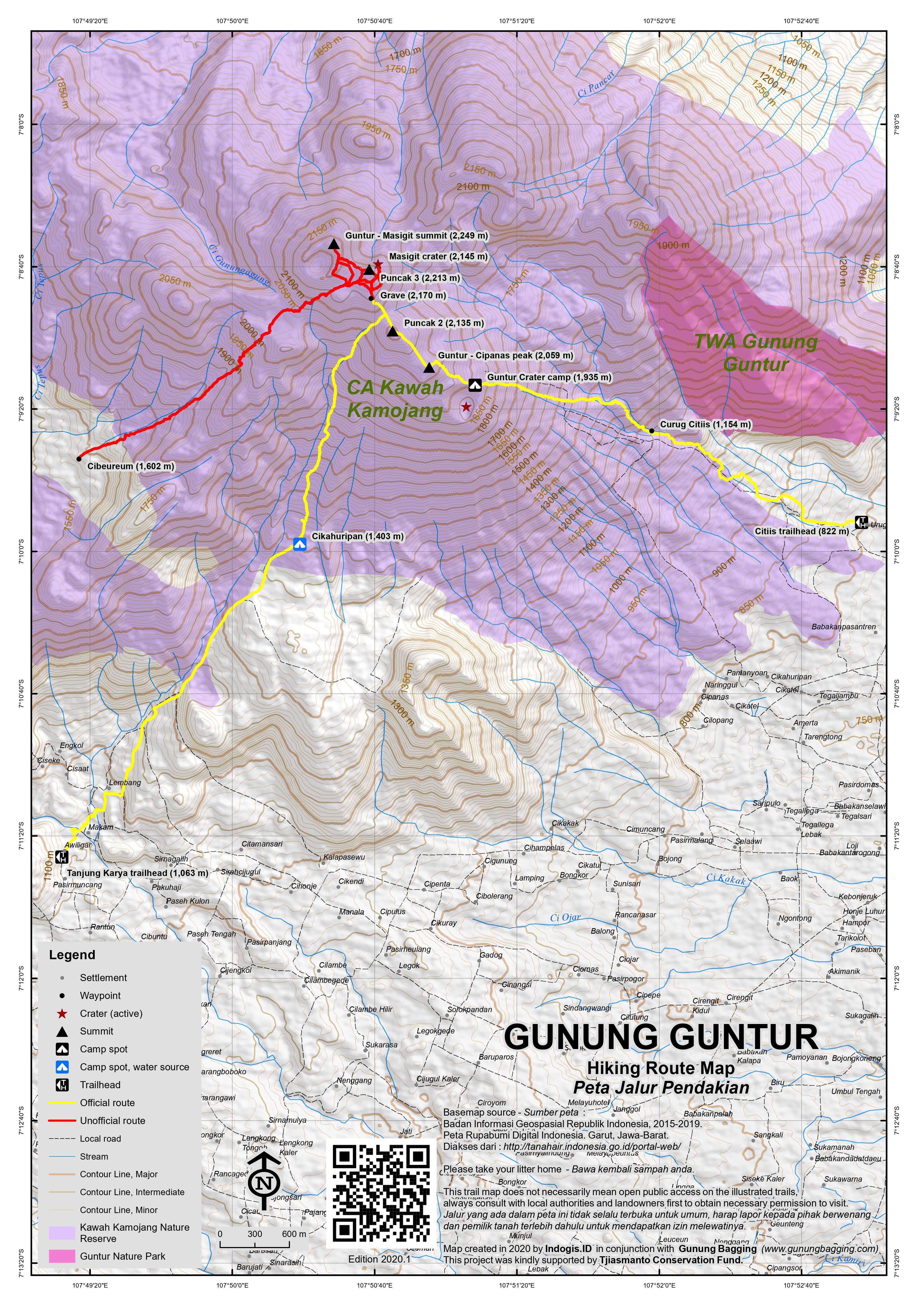 ‘Guntur’ is Indonesian for ‘thunder’ so Gunung Guntur is literally ‘thunder mountain’. ‘Masigit’ is Sundanese for ‘mosque’ and was an early spelling of ‘mesjid’ (mosque) since the late 19th century.