Gunung or Bukit Daun is one of the highest and most prominent peaks in the southern half of the island of Sumatra and in recent years a hike to the lake near the top has been growing in popularity with local hikers. The lower slopes of the mountain are covered in coffee and tea plantations and there are some small, coloured crater lakes on the north-eastern side which could be visited if you have an extra day in the area.

Bengkulu is the best airport to fly to, as it has more flights scheduled from Jakarta than the alternative Lubuk Linggau. The small city also has a few historical sights very much worth visiting including the British Graveyard (Makam Inggris) and Fort Marlborough (Benteng Marlborough) from where you can actually see Bukit Daun in the distance in clear, early morning weather.

From Bengkulu it’s around 2 hours or a little more to reach Curup, which is the best base with hotels and is a little cooler up at 600 metes above sea level. The incredibly windy road through the jungle is one of the best spots in Indonesia to see the famous Rafflesia, and occasionally there are signs at the side of the road to say that there is one in bloom a short distance away.

From Curup, it is around 40 minutes to the three villages where you can start your trek or find ojeks to the edge of the forest, namely – from south to north – Baru Manis (940m), Sentral Baru (940m) and Air Bening (1,057m). In 2021, there are two trails up Bukit Daun from these villages, the official one via the tea plantations above Baru Manis and Sentral Baru, or an unofficial and overgrown local hunters’ path beyond Air Bening. The former is very much recommended.

From the east – Baru Manis or Sentral Baru route

From the villages you can either find ojeks to take you up through the PT Agrotea Bukit Daun tea plantations to Pintu Rimba (1,400m) requiring around 45 minutes, or else walk the long way up through the plantation tracks, which requires around 2 hours and has lots of junctions with no signs. An experienced guide is very much recommended.

From Pintu Rimba, which is the forest entrance, the trail leads up the side of the mountain, gently at first but getting progressively steeper. There are two main camp spots on the trail, both of which are close to streams for water (Shelter 1 at 1,782m and Shelter 2 at 2,138m) although neither has an actual shelter building. There are leeches in the forest here, but tend to be fairly small in size and not too great in number compared to other Sumatran mountains.

The rim of the caldera (2,435m) which contains the lake is reached after about 5 hours from Pintu Rimba. Take a right to the viewpoint and lake or a left to the highest point of this eastern part of the Bukit Daun mountain range. Assuming you head right (north) it is just two minutes to the viewpoint (2,445m) from a few grand toppled-over trees which appear to still be alive and also create a fairly sheltered spot at which to camp. Indeed, this is the best place for views and also the best place to camp. It is also what most hikers regard as the summit, with various signs left here.

Continuing north, the trail drops down to the lake (2,368m), reached after just ten minutes or so. On the Bakosurtanal map this is simply labelled as Danau Bukit Daun, but is known locally as Danau Telapak Kaki (‘foot sole lake’) because of its shape.

This very pleasant highland lake is about 350 metres wide and was presumably formed in an old volcanic crater though no eruptions are known to have occurred in recent times. The local hikers who visit Bukit Daun tend to camp here, and sadly there is a fair amount of plastic left behind in what is a sparsely-populated, protected forest area. It is also rather muddy, which is why the viewpoint above is proobably the better place to camp.

However, the true summit of the entire range (known as Gunung Hulupalik and just 26 metres higher at 2,493m!) is a considerable distance away to the west, lying over 3 kilometres from the clearing, as the bird flies. There are no reports of any groups having reached the true summit, and no information on a trail over there via what looks like difficult terrain on the map. It may well turn out that an approach from the west near Air Terjun Palak Siring Kemumu would be easier, rather than having to drop down into the large, remote and potentially swampy valley between the two highest peaks of the range.

Assuming you have chosen to camp at the viewpoint, watch out for a considerable array of birdlife, especially at dawn and dusk. Also watch out for the tiny biting flies, not dissimilar to Scottish midges! An anti-insect cream or spray is recommended!

Most hikers can be down at Pintu Rimba in just over 3 hours, but unless you have ojeks arranged to meet you there, it is another 2 hours through the plantation to Baru Manis or Sentral Baru.

From the north or north-east – Air Bening route

Given the considerable distance to Pintu Rimba from the villages, some locals may suggest you use the PT Geothermal Energi track which snakes up the northern side of of the mountain from Air Bening. Indeed, there is a trail in the forest here used by local hunters but it is not official and is so rarely used that it doesn’t take any less time than the other one anyway and is not recommended at present.

There are no proper Pos or signs, and the informal trail leads from the geothermal track (1,479m) via a wooden shelter (1,530m) before entering forest (1,539m). Next is a spot or informal Pos (1,825m) that was once used for camping just prior to a small stream (1,878m) which may only be small pools of stagnant water and may not be reliable during the later part of the dry season. Siamang calls are often heard here, and a little higher up you may encounter pitcher plants on the forest floor.

The northern part of the rim (2,424m) is finally reached at which point you can find a way down to the edge of the lake and meet up with the official trail up from the tea plantation. Most hikers will need 5-6 hours to reach the lake from the geothermal track near Air Bening.

The main points of interest on the northern side of the mountain are actually the numerous small, coloured crater pools (Telaga Tujuh Warna, 1,300m) dotted around the forest landscape. As the name suggests, there are supposedly seven in all, including white, red and blue. However, these are not passed on the summit trail as they are situated to the north of the geothermal access track. Therefore they must be visited separately from Air Bening where you can find local ojeks. Ideally you need a separate day to visit them. 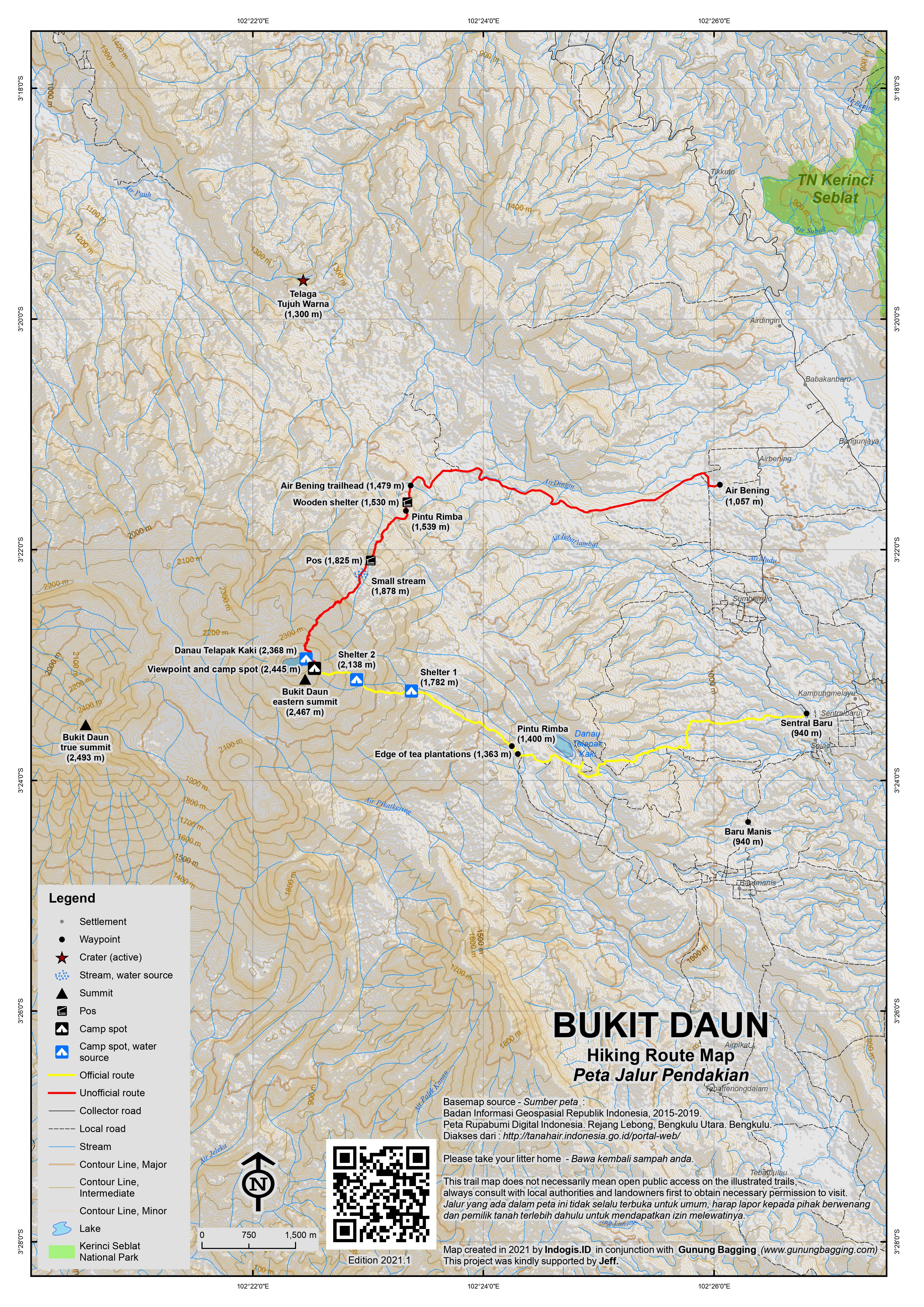