If you have a driver, or someone who can look after your motorbikes or car, you can ask them to wait for you on the asphalt road that snakes around the base of the hill. Note that there are no signs whatsoever, so you will definitely need to ask local people for directions unless you have a GPS. From the road at the base of the hill you could be up and down in less than 3 hours and perhaps wanting more. Given that there is a fabulous tradition bridge crossing the wide Lematang River between the main road and the hill it is recommended that you add an extra couple of kilometres of easy hiking on to your day and start at the village of Ulak Pandan (80m), which on the main road between Lahat and Muara Enim, less than 20km from Lahat (35 minutes or so by motorbike). You could leave your motorbike there if you take a local chap as your guide.

From Ulak Pandan, head towards the river and hill, passing through the neighbouring village of Negeri Agung (73m) before crossing the fabulous wooden bridge (if in doubt, just ask for ‘jembatan’) on foot. This is a super spot for taking photographs of the hill and its pointy summit. Once over the bridge, follow the small path down on the right that seems to lead along the side of the river. The trail then weaves through a couple of crop fields before reaching a wide farm track where there is a 4-way junction. Head straight across and up the hillside a little, past rubber plantations (81m), before reaching the tarmac/asphalt road which you then follow for 10 or 15 minutes as it winds its way up to a sharp bend to the right (100m) where you leave the road (on the left) and go straight up the track towards the shoulder of the hill. This is the point where you could leave your bikes/car with a reliable watcher if you want an ever shorter hike (see GPS tracks page for waypoints).

The path climbs steadily up the hillside, into forest (175m), and in a short time you will be at the water source (‘mata air’) (186m) where a source of cold, clean water seems to be reliable. Mata Air 2 is just 3 minutes further up the trail, which begins to get steeper and slippery (if there has been rain recently). After crossing a small stream (215m), a minor cliff face on the right side of the trail is reached. From this point you should check your boot for leeches – especially tiny ones which are difficult to detect at first. There are also quite a few mosquitoes.

The trail continues for just another 5 minutes, as it weaves round some large stones (known as ‘Kedaton 2’) which appear from higher up as three jagged rocks (586m). Just metres away at an elevation of 600m is the end of the hiking trail for ordinary walkers and the beginning of some serious rock climbing. Reaching the highest point is almost impossible without ropes, although the rumour is that a handful of Indonesian rock-climbing enthusiasts have reached the top without ropes. Either way, it would take several days to make a careful ascent and descent over very challenging terrain. Apparently the rock is andesite. It is not known what the exact height of the hill is but an old US Army map suggests 670 metres which seems reasonable.

The nearby peak of Bukit Besak (602m), which is just 4 kilometres or so south of Bukit Jempol, is also a worthwhile short hike. The top can be reached in just over one hour, and the views north to Bukit Jempol are excellent. 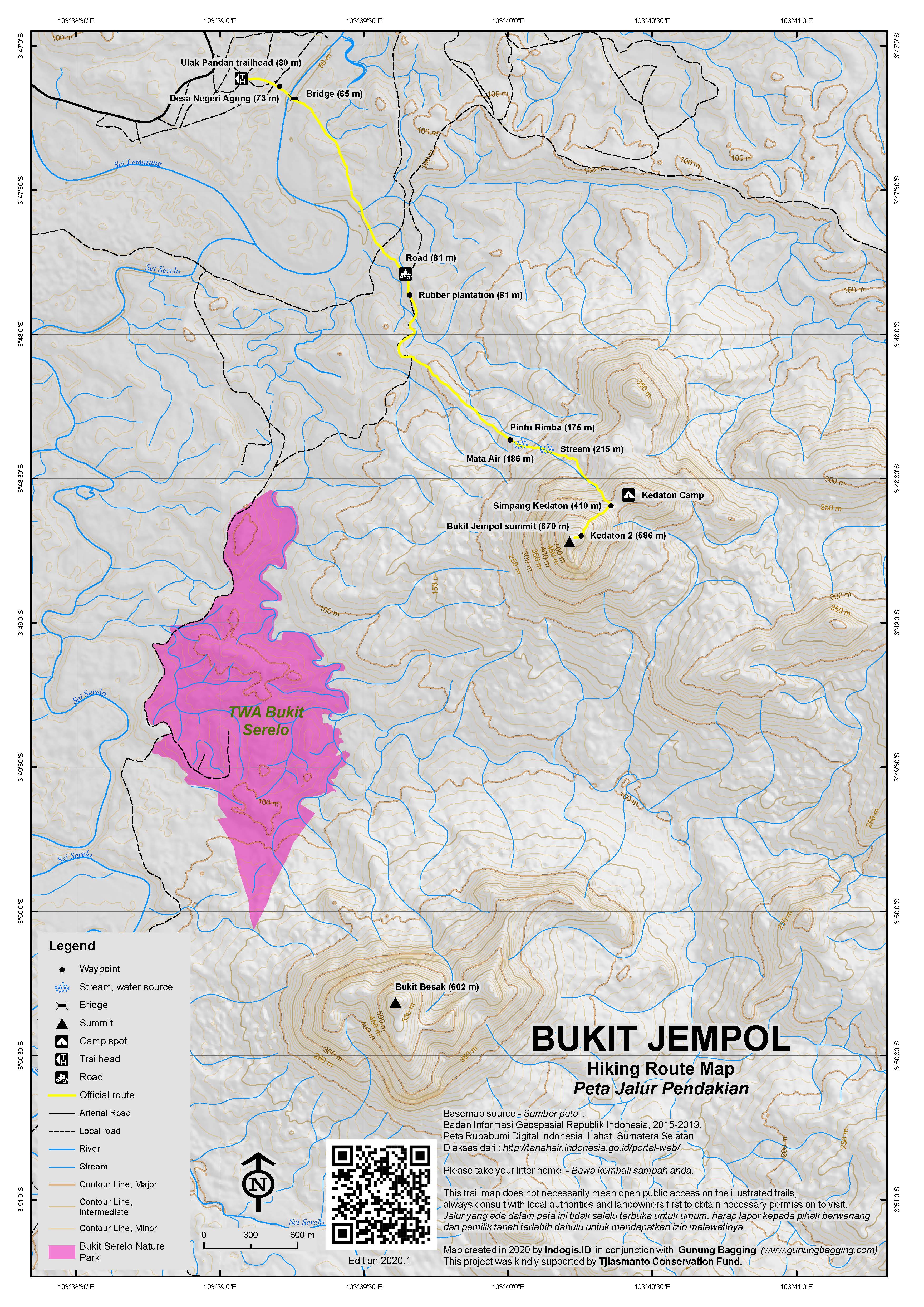