The steep and impressive Gunung Bongkok (sometimes mis-spelt ‘Bangkok’) lies just to the south of the equally imposing Gunung Parang. They are both of great interest to rock climbers as there are various vertical rock faces on their slopes. This lovely area can easily be explored on a day-trip from Jakarta.

In previous years, neither Bongkok nor Parang was often visited except by local villagers and occasional student hikers but by 2020 both are popular places for weekend trips and there are even local tourism signs from many kilometres away. Both peaks are stunning, and my 2011 prediction that it must surely only be a matter of time before these mountains become much more well-known has already come true.

Both peaks lie to the east of the large Jatiluhur reservoir near Purwakarta. The starting point for Gunung Bongkok is Sukamulya (or lesson commonly Cisarua), which is best accessed via Plered because the small farm roads from Purwakarta are incredibly bumpy and rocky and it would take at least 20 minutes just to get from Pasangrahan (starting point for Parang) to Sukamulya or Cisarua. Local roads have been improved in recent years and it now takes just over 1 hour from Purwakarta.

The Sukamulya trail starts at the end of the road beyond SMPN 2 Tegalwaru (Middle School). In 2020, there are already 2 warungs selling drinks and snacks, a simple toilet block, and work is underway to add another building. The view back down the road towards Gunung Parang is impressive and the trailhead is at an elevation of 625m above sea level. It is only 360 metres or so of ascent to reach the summit which takes most hikers between 1 hour and 90 minutes up and a similar amount of time to descend again.

Follow the stone path as it leads up the hillside. Soon you will have reached the ridge at Pos 2 (659m) which is a very pleasant area with a lovely little building and a bamboo walkway viewpoint overlooking the southern end of Jatiluhur reservoir on the other side of the mountain. You can also see the less popular path coming up from the other side at Cisarua (see below for details).

From Pos 2, take a right. The area is full of bamboo and occasional large boulders. Some of these boulders would provide shelter in the event of heavy rain. The trail soon gets much steeper and there are several rather tricky places where you will need to use both hands to ascend/descend large rocks (764m) and steep muddy areas. Thankfully there are ropes which will assist you in this. After 770m the bamboo gives way to other vegetation. There is not much of a view here because of the trees, but think of this as a blessing because it would be oppressively hot outside the shade.

Soon you will reach the true summit ridge (957m), where you turn left, pass the site of an ancient grave (seen in 2011 but not in 2020) and then finally spot the summit boulders of this superb mountain.

Because of the size of the boulders, the highest of which is called Batu Tumpuk, no trees can grow at the top of the mountain and so the views are absolutely stunning – the vastness of the Jatiluhur reservoir below, the phenomenal shape of neighbouring Gunung Parang, the vertical drops back down to the villages and the holy mountain of Gunung Sangga Buana on the other side of the reservoir. It is truly breathtaking – perhaps the finest view within 100 kilometres of Jakarta.

The boulders are easily climbed so – unlike the densely vegetated Gunung Parang – Bongkok can be bagged very easily. Do take great care however because a fall here would mean falling several hundred metres down the cliff face of the mountain. There is much animal life here – swallows love to swoop round the peak and in sunny conditions you will probably be able to see a few eagles soaring below you. There are also a number of flying ants so make sure to check for them every few minutes.

After enjoying an hour or two in the shade of the huge boulders, simply follow the trail back down to Sukamulya. Because of a few steep, difficult sections of the trail, allow a similar amount of time to descend as to ascend.

In 2020, the Sukamulya route is by far the most popular one, but the mountain can also be climbed from Cisarua on the west side of the mountain. In Cisarua, there is a small warung where a couple of vehicles can be left. The local people are very friendly and would be more than willing to guide you to the top for a very modest fee. Cisarua is at an elevation of approximately 452m so it’s just 520 metres of ascent to reach the top, which can easily be done in 2 hours by most fit people.

There is a new track leading up from Cisarua towards the mountain itself. From here, in good weather you will be able to spot the huge glistening andesite boulders which crown the peak of Bongkok.

The farm trail leads up the hillside and follows a pleasant grassy strip for some distance. It’s a beautiful area – mango trees, cattle roaming freely and great views back down towards the huge reservoir.

After about 30 minutes of fairly standard upland farm hiking, you will reach Pos 2 at the crest of the hill (665m) and this is where you meet the more popular route up from Sulkamulya and where you must turn left onto the shoulder of the mountain.

Follow the description above to reach the peak and allow around 2 hours or less to descend. 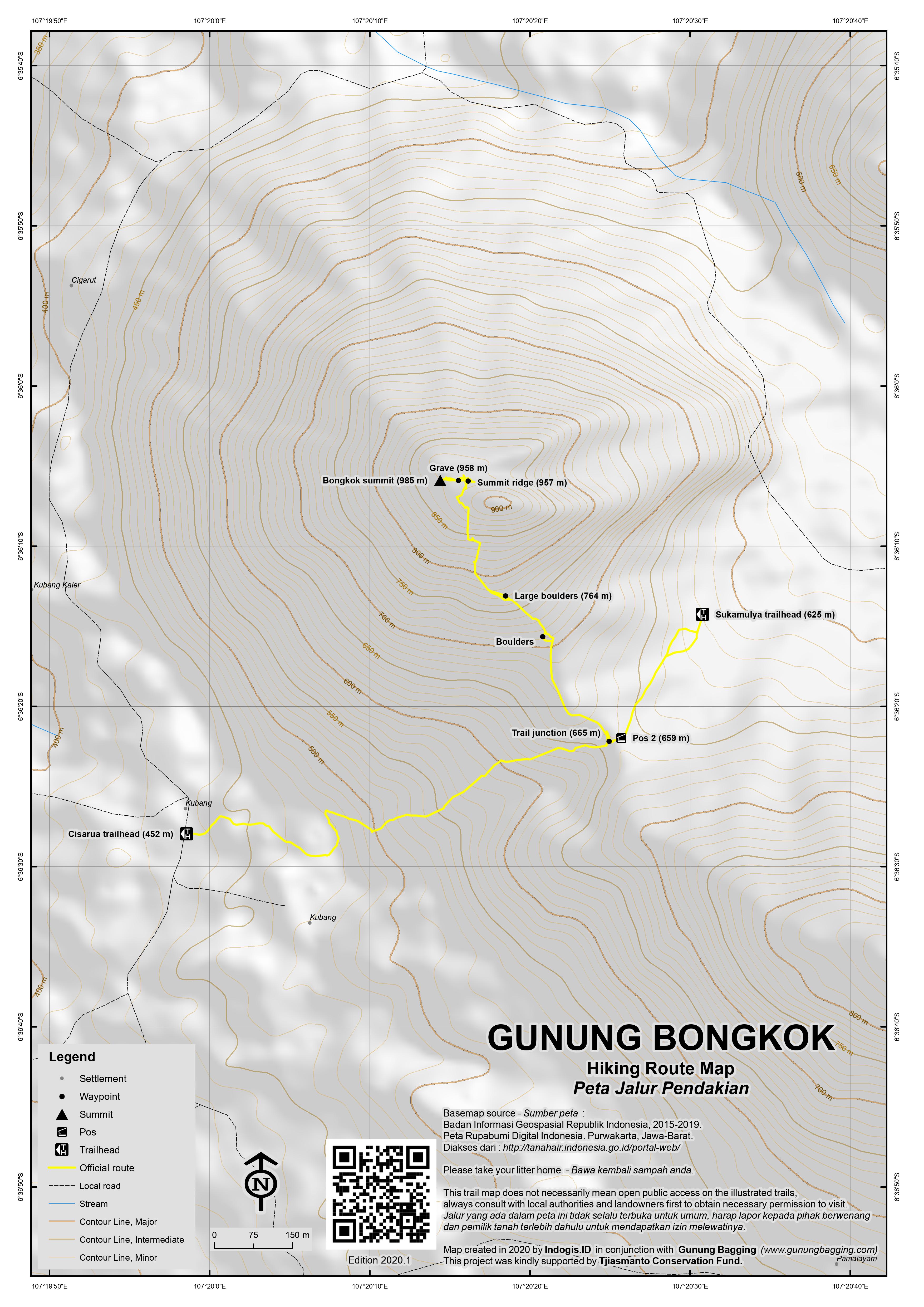