This Ribu is Bali’s holy western mountain and is one of the wildest areas on the island. It is rarely visited by anyone other than local people who climb to the temples at the summit but there are several trails on its slopes which are in reasonable condition. The name means ‘coconut shell’ in Balinese. There are hot springs and three craters on other parts of the large mountain massif. It is nowhere near as popular as Batur or Agung although the summit area has been cleared and there are some excellent views from the higher slopes to the easternmost Java peaks in the west to Agung and Lombok’s Gunung Rinjani in the east.

The most popular route leads from Batukaru temple (Pura Batukaru). The Pura Lahur temple perches at 823m at the end of the steep road north of Meliling past Wongaya Gede. This was the state ancestral temple of the Tabanan court, and each of the shrines represents a different dynastic ancestor. It usually takes 4 or 5 hours to the summit of the mountain and 3 and a half hours to descend.

However, whilst this route would appear to be the most commonly used, it is very unfortunate that the staff at the temple office have begun to gain a very bad reputation indeed, particularly when dealing with non-Indonesians. They are very unhelpful towards would-be hikers – ridiculous sums of money have been demanded for a guide (which they consider to be obligatory), they will claim that you require permits from various local authorities, and to get onto the trail to the summit itself from the temple car park you have to enter the temple area (for which wearing a sarong is required).

There seems to be a trail down the side of the Batukaru temple complex to nearby villages but it is recommended that you climb this mountain from a different but nearby route from near Jatiluwih as the trail is in good condition and the starting point is a very peaceful and picturesque one. You can, of course, descend to Batukaru temple, but it is advisable to have transport arranged waiting for you at a planned time. Both routes take a similar amount of time and offer enjoyable forest hiking, but neither has panoramic views until near the very top.

To get to the more hassle-free starting point near Jatiluwih it is best to have a local driver who knows the area as the roads up in the hills north of Tabanan are quite difficult to navigate. Broadly speaking, you can either head west for 30 minutes from Baturiti on the main road traversing the island north-south from Singaraja to Denpasar or head north up a complex system of narrow roads from Tabanan. Jatiluwih is a popular spot for day excursions as the panoramas of rice terraces are some of the finest on the island. You could try asking for a guide here but it may be better to try doing so in advance. From the main road near Jatiluwih (at 759m), there is a road leading up the mountainside, but it has no signpost so ask for Pura Luhur Bhujangga Waisnawa (908m), which is the highest point you can drive a vehicle. There is enough space for a couple of cars to park just before the temple. You shouldn’t have trouble getting directions from local people, but if you do, ask for the hen farm – which is halfway up the road to the temple – and stay left at all junctions. There are one or two spots where the road surface is very rough but a regular car should be able to manage it.

There are temples every 200 metres or so but Luhur Bhujangga Waisnawa is by far the most elaborate, featuring one structure with an 11-tiered roof! If you have travelled by ojek (motorcycle taxi) you could actually continue up a narrow cement track past another temple with an excellent view of Gunung Batukaru peak above, up through farmland to a further temple with two painted tiger statues underneath yellow and white umbrella sun-shades (956m). From here, the cement track ends and the hiking trail begins.

In a couple of minutes, and just before the trail enters the forest, you will reach yet another small temple structure with another two yellow and white painted tigers (985m). This suggests that the rumours of big cats still living in the Batukaru forests might well be true. The trail then leads pleasantly up through the forest though the only signs are inaccurate elevation readings. There is not much litter – mainly because not many people use the trail – and the path is very clear for the most part. At 1,432m there is a small junction – stay left (straight on up the mountain). There are a few steep and muddy areas but the terrain should not present any problems to fit hikers.

After about 3 hours of delightful forest hiking, you should have reached about 2,000m elevation. From this point, the trail gets a lot more overgrown – there is a lot of bracken and dense undergrowth to climb through – but the route remains obvious. The final hour of climbing is quite exhausting but the narrowness of the ridge is very impressive – if there was no vegetation to hide the sheer drops here it might even be quite scary! If you are on the way to see the sunrise then by now early daylight will have given you a first glimpse of Bali in every direction. Finally, after about 4 or 5 hours you should have reached the grassy summit area. The summit is home to various shrines which are the final destination for many pilgrimages from villages surrounding the mountain.

There is a lot of space here for tents but you may well find that the summit area itself is covered in vast amounts of litter and offerings left to rot – a real shame that local people do not take their litter back down with them. Indeed, there was even a dog up here when we camped, going through the litter looking for food and howling all night! However, the views in clear weather are astounding – mountains in East Java including little Baluran and large Ijen-Merapi and Raung, the north and south coasts of Bali, Lake Tamblingan to the north, Gunung Batur and Agung to the east. In very good weather you should be able to see Lombok’s Gunung Rinjani in the far distance, just to the right of Agung. It is a fabulous panorama.

You can return the same way in about 3 hours, or if you are feeling adventurous you could descend to Batukaru temple, which takes a similar amount of time. If doing so, follow the main path along the top of the mountain and you should have no problems getting lost (there is a small trail leading north from the very summit but this is a rarely-used trail and not the correct one!). As is the case with the ascent from Jatiluwih, the highest part of the trail is the most overgrown. In several areas just below the summit it is essential to be very careful as you have to climb through sections where the path has been washed down by recent heavy tropical storms.

There are a lot of leeches on this trail so make sure to check your clothing every half an hour. The trail is slightly monotonous and muddy but especially on the way down you will be able to admire many species of mushrooms, a large variety of ferns and some amazing huge trees. The first landmark of any note is a cement pillar at Pos 3 (1,867m). Shortly afterwards is Pos 2 (1,594m) with a curious ‘Seacology’ stone tablet and a minor trail leading off to the right (don’t take it – stay on the main trail!). There is another open area where people probably stop for a rest at 1,437m but it is not recommended because of the number of leeches in this forest! There are some recently-fallen trees at 1,207m but they are quite easy to climb over if you take care and go slowly. The trail then flattens out and the final 45 minutes of descent is very pleasant though incredibly humid virgin forest.

Eventually you will reach the edge of the Batukaru temple complex. Given what has already been mentioned above, it is better not to take a left down to a river and then up cement steps to the comple itself, but rather follow the trail further down to beyond the temple and into local villages.

This trek is ideal for adventurous hikers who have perhaps already climbed Agung and Batur and are looking for something a little more isolated and want to enjoy new panoramas of the island.

Bagging information provided by Daniel Quinn. With thanks to Heinz von Holzen

The so-called fourth-highest mountain in Bali (after Agung, Batukaru and Abang) is the highest point on the rim of the Bedugul caldera which contains the large lakes of Danau Tamblingan, Buyan and Beratan. It lies to the north-east of Batukaru.

There are two trails up to Pucak Mangu temple. You can follow the rim from Goa Japan (Japanese Cave) on the southern shores of Lake Beratan (1,250m) or head up from Pura Pucak Manik temple (also around 1,250m elevation) which is to the south-east of the peak in the village of Pelaga / Plaga.

The most common elevation figure given for Gunung Catur is 2,023m, but this appears to refer to Pucak Mangu temple which is not located at the highest point. The true highest point is around 1 kilometre further north along the rim and is known on some maps as Gunung Penggilingan (2,096m).

Another peak worth exploring in this area is Gunung Lesong (1,865m) which lies to the south of Lake Tamblingan. The summit has a wide, deep crater called Lubang Nagaloka and despite being a short hike it is not popular so the trail is likely to be overgrown at best. 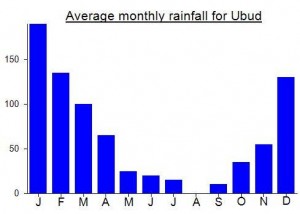 Batukaru has a large crater, the largest in Bali, but this crater is open at the southern end, allowing the river Mawa to escape. It is this that gives it the name “Batukaru”, which means “coconut shell” in Balinese. (Wikipedia, 2011)

Wikipedia. 2011. List of mountains in Bali. Accessed from http://en.wikipedia.org/wiki/List_of_mountains_in_Bali