This huge mountain is separated from its similarly conical neighbour, Gunung Sindoro, by the Kledung Pass (1,404m) and is the second highest peak in Central Java. Its only known eruption was in 1730 but there is still minor volcanic activity in the crater. It is most commonly climbed from the north from the basecamp at Garung village, which is very near to Kledung where there is a decent hotel. Public transport from Yogya is frustratingly slow so the area is better approached from Semarang if you are not using a private car. There are frequent buses through Kledung which run between Semarang and Purwokerto.

Garung village is just fifteen minutes on foot from Kledung. Guides can easily be arranged at the Garung basecamp or Kledung Pass hotel. Take the road leading south from the main road through Kledung next to a mosque and BRI bank. The basecamp is on your left (1,420m) and permits can be arranged there if your guide hasn’t already dealt with it. You can also ask for a basic map and route description (in Indonesian).

From Garung, the road leads up through Garung village and the trail through farmland begins at approximately 1,478m. You will almost certainly be able to get an ojek to the end of the road. There are actually two routes – old and new – that you can take (‘jalur lama’ and ‘jalur baru’) and they join together at two possible places further along the hike. The new route (baru) is more slightly more west than the old route but the distance between them is not great. However, this can lead to confusion as there are no signposts and guides have known to become lost themselves on minor farm tracks on the lower slopes! The new trail has presumably been opened to combat erosion on the old route, which is steeper and more slippery. Your guide is likely to take you up the new route (‘jalur baru’) which is a wise decision – even more so for the descent, which is slippery whichever route you take!

Experienced hikers should be able to reach the crater rim in 5-6 hours because although the trail is steep it is only 7 km long. ‘Jalur baru’ (new route) is better for water sources as a stream runs parallel to it on the west. On ‘jalur baru’ (new route) the last place for water is a large stream on the edge of farm plantation at 1,900m. Jalur baru has Pos 1 (1,932m) and Pos 2 (2,234m) which are both very basic wooden frames. They will protect you from rain but are of little merit as places to actually camp. There are numerous places to pitch a tent on the way up but most places can only accommodate 2 or 3 tents at most. At 2,317m is a monument to a hiker who died on Sumbing and a slightly larger camping area. Beyond this, the forest becomes thinner and thinner and views over to Gunung Sindoro become correspondingly magnificent. After the two different routes have met, the first major landmark on the hike is ‘watu kotak’ (stone box) at 2,876m. The trail leads along the left side of this and a second rocky cliff of considerable length (known simply as ‘tebing’) a little higher up at 3,000 – 3,040m. This is near the area known to guides as ‘tanah putih’ (white land).

As you near the crater rim there are two destinations for hikers. Almost all hikers simply continue to the top of the rim. The peak is known as Puncak Buntu (3,308m) and and in good weather conditions hikers are rewarded with the tremendous view over to Merapi and Merbabu. Down below is the large crater – smoke may be billowing from the middle section and there is a large pool of water on the eastern end of the crater complex. It is possible to explore the crater by descending into it from the rim but be very careful of the gases and do not camp there.

The highest point of Sumbing mountain is a steep rocky part of the crater rim further south-west. Most hikers are happy to consider the crater rim as their destination. Although the real summit is not far away, it is slightly difficult to reach and not often visited. Indeed, if this is your plan you must mention to your guide before setting off that you want to climb to ‘puncak sejati’ or ‘puncak tertinggi’ (the highest peak). Just below Puncak Buntu, there is a trail skirting across the mountain, just 20 metres or so below the top of the rim. It leads up to a rocky part of the rim with an Indonesian flag (October 2010). This is where hikers are most able to descend into the crater itself should they wish. From here you will be able to see two further rocky peaks on the rim, further west. The second one is the true summit. Getting to the first one is fairly easy but the terrain is dangerous because there are sheer drops and a little mistake would have terrible consequences. Indeed, by following the very crest of the rim you will encounter drops that are impassable without ropes but can be avoided slightly lower down from the top of the rim. The most difficult section which must be negotiated is an awkward step between the true summit and the rocky peak preceding it. Unless you are a very confident scrambler it is difficult and dangerous to attempt alone. However, if you are with others who can give you a hand you should be able to manage it. Please be careful.

After the tricky section, all you need to do is follow the trail round the side of the true peak and then up onto the top of it (don’t attempt to climb directly up the steep cliffs!). There is a tiled cairn with Javanese Edelweiss at the very top and the views are – understandably – even better than from Puncak Buntu. To reach the true summit from Puncak Buntu and the main Garung trail takes about 45 minutes each way. It could also be reached from the trail from Cepit – see below – if hikers climb up to the part of the rim with the flag on it.

To descend the same way to Garung from the crater rim takes about four and a half hours.

Sumbing is also climbed from another basecamp at Cepit (near Pagergunung village) which lies 7km from Parakan. This route leads directly into the crater but it is a longer trail. It is requested that you register and pay a small fee at the basecamp. There is no water along this route so take plenty with you. The route (which takes about 7 hours) goes via forest and savanna before reaching Batu Kasur (Stone mattress) and Batu Lawang (Stone door). After these landmarks you reach the caldera and sulphuric gases and also some caves, the biggest of which is called Jugil. There are also local ancestral tombs, known as Ki Ageng Makukuhan. 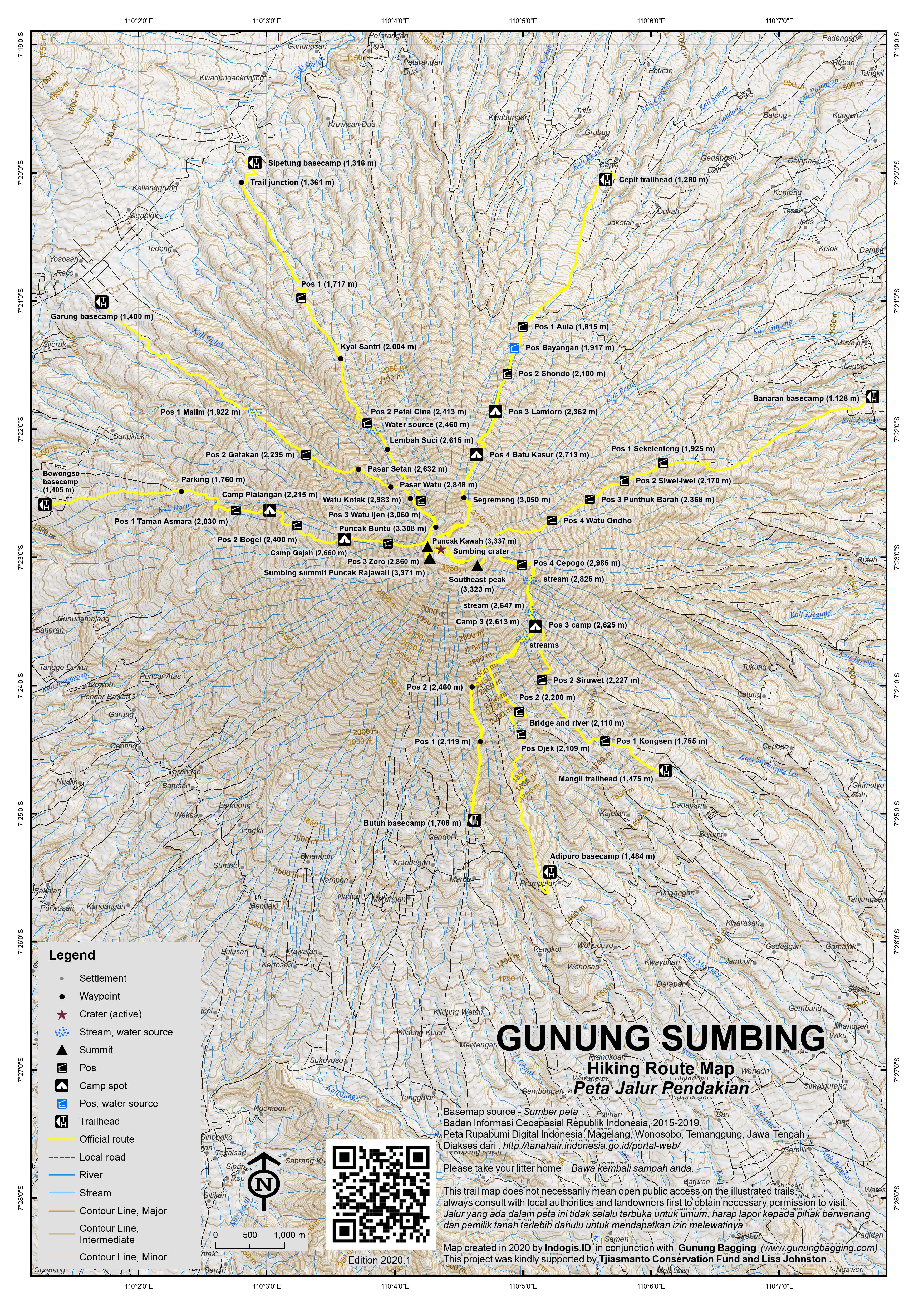 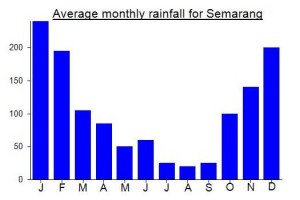