The trail starts at the village of Ranu Pani (2,109m) where there is basic accommodation available and you will need a minimum of two full days for the hike to the summit and back. There are many trekking agencies in East Java who offer jeep transport across the length and breadth of the National Park including the vast Bromo caldera and to Ranu Pani village itself from the city of Malang via Tumpang. Thankfully it is not yet possible to drive to the summit of Semeru! However, the road from Malang to Ranu Pani offers breathtaking views and reaches an elevation of over 2,400m at its highest point.

From Ranu Pani follow the road towards the lake which gives the village its name and make sure you take a right just before red entrance posts. A left turn up onto a narrow track through forest is just a couple of minutes further along and once you’re on this trail it is quite difficult to lose your way because there are frequent cement markers and green shelters at 2,284m, 2,346m and 2,426m respectively. The path is even paved at this point. Look out for monkeys in the area.

It’s a long 14km to Kalimati basecamp (2,669m) but the route goes via the beautiful Ranu Kumbolo lake (2,382m) which is a good camp spot in its own right. It can be reached in 4 hours from Ranu Pani but is famous for its low temperatures at night – frost is common so remember to take plenty of warm clothing and don’t leave your boots outside. There are a couple of huts on the far side of the lake before which the path ascends a hundred metres or so before descending again into an area which is sometimes covered in beautiful purple flowers. Kalimati – which lies beneath but in view of the rocky cone of Semeru summit itself – is another 3 hours of fantastic, easy hiking across savanna-esque landscapes and is perhaps marginally warmer. There is a somewhat shabby hut here and the flat area surrounding it is a very popular camping area and water is to be found about 15 minutes walk down to the right.

Another 2 km (one hour) is Arcopodo basecamp (2,912m), which is the best place to camp if you intend on reaching the summit at dawn and have the best chance of clear views and more importantly to avoid the worst of the gases. The path descends a little from Kalimati before ascending steeply up the forested base of the cone of Semeru itself. A lot of people choose to spend one night at Ranu Kumbolo and a second up at Arcopodo before making a pre-dawn ascent to the summit. There used to be a pair of statues at Arcopodo but it is presumed they were covered during landslides. There is plenty of flattish space for tents here – at least 10 – despite the generally steep pine forest terrain. It is about 3 hours from Arcopodo camp to the summit and the track is very steep. In some places lower down there are cement posts to guide you but many of them have long since toppled over and are buried in volcanic scree! The treeline ends at 3,110 and there are excellent views particularly to Arjuna. You may also spot some pre-dawn camera flashes from the famous viewpoint Gunung Pananjakan on the northern side of the Bromo caldera. The summit cone is very slippery with small volcanic rocks – definitely a case of two steps forward and one step back. 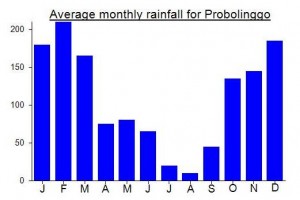