This Ribu is one of the two peaks that form part of the famous Gede-Pangrango National Park. It is only 50 km drive from Indonesia’s capital city Jakarta, and is one of the most popular destinations in “The Puncak”, which is the area between Cisarua and Cibodas. Due to its proximity to Jakarta and Bandung, it sees over 50,000 visitors per year and there is actually a limit to how many climbers are allowed up each day. The most common starting point is at the entrance to the magnificent Cibodas Botanical Gardens where the Gede-Pangrango Park office is located (for permits, guides, porters and basic maps).

Most hikers’ destination in Gede-Pangrango National Park is actually Gunung Gede (2,962m), understandably so since the hike to Gede summit around the towering cliffs of its crater is a wonderful hiking experience, and offers extensive views of Pangrango, Salak, the Bandung area and on clear days you can see Gunung Karang in Banten Province, Jakarta, and the coastline of West Java. You can see Sumatra if you’re lucky. Pangrango itself is a dormant volcano with a forested summit, however for fit hikers a trek to both peaks can be done in a weekend with only one night’s camping. One Alfred Russel Wallace was certainly impressed, writing that ‘by far the most interesting incident in my visit to Java was a trip to the summit of the Pangrango and Gede Mountain’.

From the National Park Office in Cibodas (1,250m), follow the track by the side of the botanical garden golf course to the gate post where the park staff check you have a permit and a guide or porter (1,367m). After 30 minutes from here along the track at 1,575m is Telaga Biru (blue lake) which lies to the left of the path.

Another 15 minutes and you will reach a large swamp area which has a wooden and concrete walkway across it. This is known as Rawa Gayonggong and it is good place for photos of Pangrango in clear weather. After that is a wooden hut and signposts known as Rawa Panyangcangan (1,654m) just before Cibeureum waterfall (which isn’t actually on the main path itself but makes a pleasant minor detour).

It is another 60-90 minutes from here via shelters Rawa Denok 1 (1,802m) and 2 (1,896m) and Batu Kukus 1 (1,950m) and 2 (2,048m) to the fantastic hot stream waterfall (2,165m), which you cross with the use of the rope and poles to hold onto. The water is incredibly hot even though it has travelled quite a long way already out of the crater. Just beyond the hot water is a rather unattractive cement hut and another steaming stream.

From the hot springs, it is about 15 minutes to reach the camping area of Kandang Batu (2,181m), which is an option for camping only for those who are novice hikers. It has a source of water, but really you should hike on another 30 to 45 minutes – via an impressive small waterfall called Panca Weuleuh – to Kandang Badak camping site (2,406m), which is a relatively flat forest area in the col between Pangrango (northwest) and Gede (Southeast). This is the most popular camping area, since it offer the option to climb both peaks and has a good source of water. There is even sometimes a small warung (snack stall) here. Total hiking time so far is about 3 hours for fit hikers, but perhaps 4 or 5 hours for those who are less regular hikers.

The recommended option if you want to climb both peaks in one weekend is to pitch your tent here, and then proceed directly to climb Pangrango. You can leave you porter or guide to look after your tent, although there are not likely to be any security concerns. It is approximately a 3 hour round trip to climb Pangrango from Kandang Badak. Just a few minutes on the path above the Kandang Badak campsite, you will reach a T- junction (2,441m) with the trail between Gede and Pangrango and a signpost (right for Pangrango, left for Gede). Take a right and follow the steep forested trail up to the top of Pangrango (3,020m). The trail is crossed by some large fallen trees and the path becomes rutted and it is easier to zig-zag up the trail with the lesser gradient rather than taking all the short cuts.

From the signposts it takes about 1.5 to 2 hours to reach the top where there is a wooden structure and cement pillar at the top and some reasonable views through the tree branches to the Gede crater. At 3,020m, Pangrango is just 58 metres higher than neighbouring Gunung Gede. The pillar is from the Dutch colonial era and constructed as part of early efforts to properly map Java and other islands. If you look on the back of it you will see it has a numbered marker – 142. The best place to camp on Pangrango is just five minutes beyond the highest point at a lovely, open grassy area called Alun-alun Mandalawangi, but there is no source of water. The main reason to camp here would be for the relative peace and quiet since most people prefer camping at Kandang Badak or on Gede.

After spending the night at Kandang Badak, you should get up early and complete the much easier climb to the crater rim and the summit of Gunung Gede (2,962m). From Kandang Badak, follow the obvious route onto the shoulder of Gede. You shouldn’t have problems if you stay to the trail because it is a very popular hike and there will be many other hikers around. As you start to climb higher in the forest, you reach a point where there are some metal posts with wire strung between them as the trail gets markedly steeper up a rocky outcrop. It’s easy to climb this initial part, but above that the rock slop is very steep and some people may not be comfortable hauling themselves up this steep section. If you don’t want to do this, just as you reach the start of the metal bars and rope, there is a path in a deep gully that curves off to the left of the trail. Take this route since it is an easy and safe alternative route. At very least, look out for this route on your descent.

The smell of sulphur becomes stronger and the trail nears the edge of the crater (on the left of the path). As you emerge from the forest you climb gently up along the crater rim and the views get better and better as you climb. Be careful not cross the roped path because the crater edge cliffs are high and sheer. There is a flag at the top and fantastic views in all directions – Gede is a much better viewpoint than the forested Pangrango peak. Many people camp on and around the summit of Gede, and at least there is no hike for sunrise, but there is also no source of water. From the summit to the south is the wonderful and atmospheric Surya Kencana meadow (2,750m, less than one hour beyond Gede summit), which is a great place for a second night’s camping if you have time (or your first night if you didn’t bother to summit Pangrango). On the other side of the meadow is the forested Gunung Gumuruh, at 2,927m the third highest peak in the area.

From Surya Kencana you can follow the long, significantly eroded trail round to Gunung Putri village (1,553m) and take an ojek (motorbike taxi) back to Cibodas. Allow 4-5 hours to reach Gunung Putri from Surya Kencana. The alternative is to simply return the same way, of course.

There is also access to Gede-Pangrango from the south at Pondok Halimun (1,111m), Selabintana – near Sukabumi. Because it is further away from Jakarta, this is the least popular of the three routes and therefore far fewer people use the trail.

It is a long 11km from the National Park offices to Surya Kencana camping area below Gede summit and there are a lot of leeches on the lower part of this trail! It makes a great trip if you don’t mind driving that little bit further round to Sukabumi and also if you enjoy a bit more solitude.

The trail leads via Cigeber (1,798m) and Cileutik (2,380m) before reaching the south-west edge of Surya Kencana. Allow approximately 7-8 hours to reach Surya Kencana from the starting point.

It is technically possible to hike either Gede or Pangrango as a long day-hike from the Cibodas entrance starting at 6am, and people are known to do this, although the legality of it is very much a grey area. Many locals visit the Cibeureum waterfall as part of a half-day out, and as this is one hour along the same trail as the peaks it is possible to simply continue up the mountain. However, this option is not mentioned on the National Park website which only mentions the 2 days and 1 night camping option. You could try asking about this in advance via email, as turning up on the day might lead to disappointment if they tell you it is not allowed (although some hikers just say they want to visit the waterfall).

In 2018, one-day tickets are not purchased at the main office where you sign in for a 2-day trek (see below) but a little further on at the ticket office at 1,400m. Rather oddly, the main park office for 2-day tickets doesn’t open until 8am, but the one-day office opens at 6am. Ticket prices are around Rp12,000 for locals or KITAS/KITAP holders (Rp18,500 on public holidays or weekends) or Rp150,000 for foreigners (Rp240,000 on holidays/weekends).

There remains another old trail up from near Cibodas which leads via Gunung Geger Bentang (2,042m) and after dropping down into a minor vallye, continues straight up the side of Pangrango. This trail is probably overgrown because it is now for researchers only and the National Park has banned normal hikers from using it.

The ridge north of Puncak Pass running roughly north-west to south-east has a few peaks worthy of exploration as part of a half-day hike. The range is known as Pegunungan Mega Mendung.

The most northerly (and most popular) is Gunung Kencana (1,803m according to some sources but 1,796m according to the Bakosurtanal map) which is a very easy hike from the village of Cikoneng in the tea plantations. Perhaps only one hour needed to reach the top and pleasant views from up there.

1 kilometre south-east of Kencana is the lower Gunung Luhur (1,727m). The highest on the ridge line is Gunung Lemo (1,872.7m according to the Bakosurtanal map) but few people hike it and it is overgrown. It’s a couple of kilometres further south-east and might best be approached from Telaga Warna at the top of Puncak Pass. 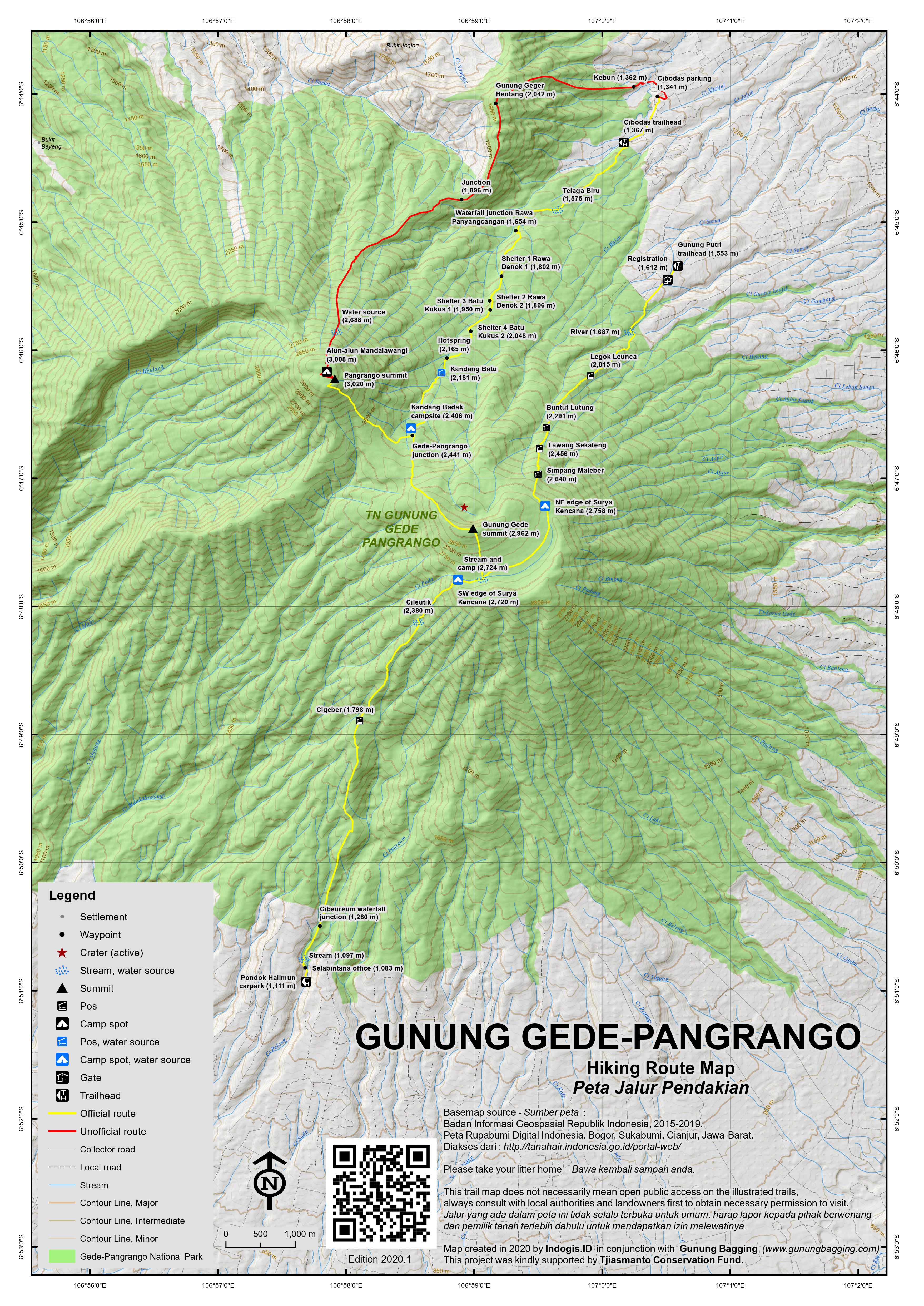 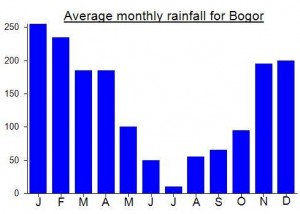 (unclear). Rango could be a variant of an ancient word that suggests “panting” or “huffing and puffing” and thus pangrango might mean “that which huffs and puffs” i.e. emits smoke and ash during eruptions. (George Quinn, 2011)