Gunung Colo on Pulau Una-una is Central Sulawesi’s only active volcano. It is perhaps the most isolated of the Togean Islands group in the Gulf of Tomini, but access is fairly easy given how popular the islands are with divers. The volcano has only erupted three times in recent history, but the most recent one in 1983 devastated the island, permanently altered the shape of its rivers, and forced all residents to evacuate. If using a motorbike (or a guide with one) Gunung Colo is an easy half-day excursion from Nino’s Homestay or Sanctum Resort on the same island.

Una-una itself is about 10 kilometres across and the main volcanic activity and highest points of the island are fairly central. To reach the island, most travellers first get to Wakai on a slow public ferry from Ampana or Gorontalo or speedboat from Ampana (much faster – just 90 minutes). If you are staying at Sanctum divers resort then you will normally be taken across directly to Una-una from Wakai (Rp800,000 one way for a boat with two motors, taking just 90 minutes, arranged in advance). Otherwise, you should be able to charter a slower boat in Wakai for around Rp500,000-Rp600,000 one way (just under 3 hours using just one motor).

The divers resort, homestays and village on Una-una are on the east of the island. The volcano can be approached from this side via dense jungle (supposedly 3 hours each way), but it is becoming more common to head up to the north by motorbike (anti-clockwise) and up a wide, dry, sandy river (one hour) as far as the motorbike can realistically go (usually only a kilometre or two). From here it is only 90 minutes or so to the craters, so if you set off at 7am you can easily be back at your accommodation for lunch.

The usual spot that motorbikes are left at is at about 80 metres above sea level. The scenery is already rather fascinating, as it is obvious that something huge must have occurred to create such an unnecessarily wide river bed for such a tiny river. Indeed, it would appear that this riverbed was greatly widened by pyroclastic flows in 1983 when the volcano last erupted.

Your guide will probably point out that the little river here is no ordinary river but flowing with hot water. From here, follow the riverbed as it slowly leads up into the interior of the island! After half an hour or so you will reach a fork in the river – cold water flows dwon from the left and hot water flows down from the right. Take a right here into denser jungle and a short, steep, roped section. The path is quite clear beyond the roped section, as it leads through dense foliage to a dry area of volcanic sand (250m). It should have taken you about one hour to reach this point. You may be able to smell sulphur. The trail leads down a little to the left to an unexpectedly large lake (235m). Look out for herons and kingfishers here waiting to catch the many fish that inhabit this lake.

From the edge of the lake you will see beyond to the left the densely forested highest tops of the island that apparently nobody visits and there is no trail to. Over to the right, on the far side of the lake, you will probably notice some volcanic emissions rising above the trees. It takes just 5 or 10 minutes to walk round to the first of two separate sandy craters. The activity in the first one is at the edge, at the bottom of a rocky cliff. The second one, another couple of minutes walk, has emissions in numerous places and can get quite noisy, like a fry pan that has been left on the hob for too long!

Some internet sources give a height of 507m for the volcano (or rather the highest peak of the island 1.3km from the craters). It could certainly be possible that Colo was once 507m high and a huge eruption brought it down to the approximately 420 metres elevation that the island is now, but given US Army maps from the 1950s give a spot height of 401m (an underestimate perhaps), I am inclined to think that either the 507m height is simply a large error, or that perhaps the volcano looked very different prior to the 1938 eruption during which it lost nearly 100 metres. Either way, it certainly wasn’t the 1983 eruption that was responsible for the markedly different published figures.

According to both Google Maps and 1950s US Army map data, the highest point in the Togean islands is on Pulau Togean/Togian itself at around 542m. Like the higher slopes of Pulau Una-una, this is likely to be covered in dense vegetation and with no trail.

From the Colo crater areas it is just over one hour back down to the bike, and then another 45 minutes by bike back round to Una-una village and the main accommodation. 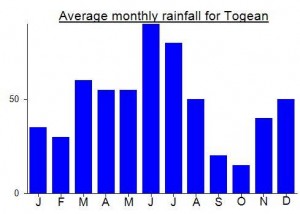 One thought on “Colo”