A solitary giant, this Ribu is the highest peak in West Java province and one of the most popular hikes in Indonesia. The starting points for the hike are 2 to 3 hours by car or public bus to the south of Cirebon, which itself is easily accessible from Jakarta by train. There are three starting points and it is easy to ascend by one route and descend the other. The Apuy route is the best as it starts at a higher elevation (approx 1,200 m). The crater is both deep and impressive, and a full circuit of the rim can be done in about one and a half hours.

Assuming you reach the crater rim from the Apuy/Palutungan route there is a cement pillar on the rim just a hundred metres to the left (north) and if you follow the rim clockwise you will reach the highest point of Ciremai (and West Java) in just over 20 minutes. Some sections of the rim are too bushy or too narrow (or both) for hikers to be able to follow the absolute top so you have to drop down on the small, overgrown trail from time to time. The highest part of the rim is marked with a cluster of red bricks and further along with the remains of some kind of sensor equipment. A full circuit of the rim can be made in about one hour and a half, but not many people do this and it is better to do it the other way around (reaching the summit close to the end of the circuit). Several sections of the trail do not offer much in the way of panoramas but for – the most part – the views to Slamet, the north Java coast and the many hills of West Java are spectacular.

If doing a full circuit, we would recommend doing it anti-clockwise, as the first half of the trail is frequently used because you must pass this way to get from the Apuy/Palutungan route to the Linggarjati route. Key points (in anti-clockwise order) are as follows. Puncak Sunan Mataram (3,058m according to the sign) which is a flattish, exposed area with space for 5 or 6 tents on the rim itself and with great views down to Waduk Darma (Darma Reservoir), another ten minutes and you’ll be at a mini-top with great views over the crater. After this, the trail gets bushier and passes under the highest parts of the rim and past a couple of spots suitable for a tent or two and with great views of Gunung Slamet in the distance. Another ten minutes and you will be at Puncak Panglongokan (3,027, according to the sign) which is close to the area where you descend on the Linggarjati route and features a cement pillar. Further along the rim the trail gets rougher and you will need to clamber over a few dead branches and under low bushes. The views here of Ciremai crater are particularly good.  After a minor drop to a superb viewpoint over the edge of the rim there is a very narrow section which you must be very careful on. Following this, the overgrown trail leads fairly gently up onto the highest section of rim. This section has two or three spots of equal height, the first being where the broken equipment lies and the final being where the red bricks are. The latter is a far, far better viewpoint, particularly of the other peaks of West Java notably the pyramid-shaped Cikuray, steaming Papandayan and the great mass of tops north of the Bandung plain. Another couple of minor ups and downs and you will be at the cement pillar just north of where the Apuy and Palutungan routes reach the rim. 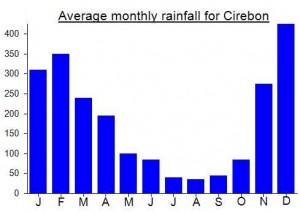