Gunung Butak is the highest mountain of a large range west of Malang, East Java. As it is under 3,000m in elevation, it is less popular than other, higher peaks in the region (many of which can be seen from the top). There is a delightful grassy meadow near the summit called Cemoro Kandang which is perfect for camping and the views at the top are spectacular.

There are three main starting points for this Ribu and the most popular and easily reached is Tuyomerto village near Batu, Malang. Up until 2015 or so, the mountain was known only to hiking enthusiasts and a few local villagers – indeed, most locals had never heard of Butak and it was necessary to say ‘alun-alun’ or ‘savanna’ (alternative names for Cemoro Kandang) or ‘Gunung Kawi’ (a lower peak in the range but also the name of the range as a whole until recently).

As of 2017 things have changed dramatically with a considerable increase in the number of people climbing this mountain and the smaller Gunung Panderman which is part of the same range but much lower at just 2,045m. The trail up Butak is no longer overgrown, and there are signs for both Panderman and Gunung Butak (spelt ‘Bhutak’ on the signs here for some unknown reason). From Batu, take an ojek to Kampung Tuyomerto, which takes about 15 minutes, and follow the road as far up as you can go.

The old basecamp is gone but there is an attractive new wooden building (1,350m) above Tuyomerto village where hikers can purchase very affordable entrance tickets, find guides and porters, and leave their motorbikes overnight. There are even a couple of warungs to purchase snacks and drinks.

Pak Budi remains the best guide and can organise other villagers as porters. A guide can take you up and down in one long day (start early!) or a guide and porters will take you one-way and carry your gear to the camping area at Cemoro Kandang / Alun-alun / Savanna – you then carry your own gear down the next day. You can also hike at night in time for the sunrise and then straight back down – this means no need for camping gear but then again you won’t be able to savour the atmosphere properly unless you do camp up there.

From the new wooden building above Tuyomerto, it takes approximately 5 to 6 hours to reach the large grassy camping area known as Cemoro Kandang (or ‘alun-alun’ / ‘savanna’) (2,670 m) and the hike is almost 10 km following a fairly modest gradient. It takes about 3.5 to 4.5 hours to come down the same way. There are several places on the trail where it is possible to camp, but none are anywhere near as pleasant as Cemoro Kandang.

From the base camp, the climb through the cabbage fields and other agriculture to Pos 2 (1,575 m) takes about 45 minutes. From Pos 2 you continue up a valley in degraded/secondary forest before the steepest section of the hike up to Pos 4 (1,980 m), which takes about 1 hour. After this climb, the trail has a very nice gentle gradient, which mean you can hike at a good speed. Look out for edible physalis plants (‘ciplukan’ fruits) growing by the trail at an elevation of around 2,200, – 2,400m.

After another 3 hours you should reach Pos 6 (2,460 m), faster if the trail is clear. The route to the alun-alun – known as Cemoro Kandang (2,670 m) – and camping area is much clearer from here, and should take no more than 2 hours. The views in good weather are lovely from here as you walk beneath tall trees and see Semeru and Arjuno-Welirang in the distance. As the trail skirts round the mountain, you will see a peak to the right (west north west) which is part of the same range as Butak but difficult to reach from here. It is called Gunung Kawi and is approximately 2,550m in elevation. In clear conditions, to the left of Kawi is Gunung Liman and Gunung Lawu in the far distance, and then the pyramid-like rocky summit of fiery Gunung Kelud in the foreground. Looking north, you may see the large forested range called Anjasmoro which lies west of Arjuno-Welirang and has an unusual-shaped peak.

Once you have arrived at Cemoro Kandang (2,670m), look for a suitable flat area to pitch your tent (preferably away from the main path to minimise noise from other hikers at night). In some areas the grass is very clumpy. There is an excellent source of drinking water from a spring with pipe, and beyond the spring, further south, is a brilliant view to the summit of Java’s highest peak Semeru.

The highest point is a 30-minute climb up to the top of the ridge that surrounds the alun-alun and in good conditions you can see Arjuno, Semeru, Liman and Lawu in the far distance. This ridge is presumably the remains of an ancient volcanic crater wall, though these days there is no obvious volcanic activity here. In previous years it was not always easy to find the trail to the true summit, but as of 2017 there is a signpost for Gn Butak about 250m south of the spring (follow the path on the right) and at the point at which you have a very clear view of Semeru to the east. In good weather, you may even be able to see the large stone cairn and flagpole at the summit from Cemoro Kandang itself. After admiring the panorama of the giants of East Java, it is 20-25 minutes back down to Cemoro Kandang from the summit, unless of course you wish to camp on the sumit ridge which is certainly large enough for 4 or 5 tents.

Whilst most hikers return the same way to Tuyomerto (in under 4 hours for fast hikers), there are at least two other routes worth considering if time is not an issue. Firstly, a trail continues south from Cemoro Kandang to an ancient well and some interesting ancient grave sites and small caves. It heads roughly southeast and eventually brings you out at Kraton Gunung Kawi (roughly 1,200m according to Google Earth) which is a place where people go to pray for good luck and so on. This is a shorter trail than Tuyomerto, but is less frequently used, more overgrown and also apparently takes longer because you ascend Puncak Batu Tulis first (Gunung Pitrang – 2,593m – on the Bakosurtanal map). Allow at least 6 hours to get down to Kraton Gunung Kawi. Of course, the Kraton ought really to be called Kraton Gunung Butak, because Gunung Kawi is in the opposite direction – north-west rather than south east.

The mountain can also be climbed from the west. The other trail – also shorter than the Tuyomerto route – starts at the village of Sirah Kencong (roughly 1,100m). This trail actually leads directly up to the summit ridge rather than via Cemoro Kandang – see the GPS tracks page for details of this route.

Gunung Kawi itself is a much less well-frequented peak around 4 kilometres north/north-west of the top of Gunung Butak. It has a steep crater wall to the west and two summits within 1 kilometre of each other – the northern top is 2,622m and the southern top is 2,639m according to the Bakosurtanal map. The trails here are likely to be incredibly overgrown, but there is a simple building or shelter at the top of the northern summit. The best approach is from the north near Pujon but you will probably find it difficult to find anyone who has been here before.

Bagging information by Daniel Quinn and Andy Dean (updated May 2017). 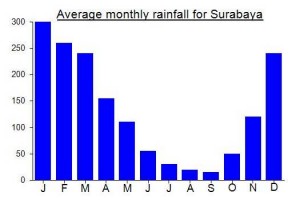 There are two possible origins. The first possibility is that it comes from ‘botak’ meaning ‘bald’ in Indonesian. The mountain is rather grassy near the top which may lead it to be described as ‘bald’. The alternative origin is from the Javanese word ‘buta’ meaning ‘hidden’, unable to be seen.