There are two main routes to the peak – one from the north at Batu Kambar (via Barabai) and one from the southwest at Kampung Kadayang near Loksado. Both places take about 4 hours to reach from Banjarmasin by car (3 and a half from the airport). The Barabai route goes via Sungai Karuh (Karuh River) which is the traditional place to camp after 6-8 hours of hiking. It is then another 3-4 hours to the summit. By all accounts, the Barabai route is slightly longer and more arduous, so given that there are guides and accommodation in Loksado I would recommend the latter.

Loksado actually gets a sizeable write-up in the Lonely Planet guidebooks and it is clear that locals are used to a regular trickle of foreigners. It’s a friendly Dayak village with traditional wooden bridges over narrow rivers but be warned that food options are extremely limited here and there appears to be no alcohol for sale whatsoever! Also, although strong hikers can climb to the summit with just one night spent camping, very few guides will want to ‘rush’ what they consider to be a three-day trek. Nevertheless if you contact Pak Amat (see ‘guides’ page) in advance he will be able to find a local who can cover the distance quickly if you have limits on your time. To reach the peak takes about 6-8 hours and 5-7 coming down. It’s not technically challenging but the length of the hike and the fact that the starting point is at a mere 500m will probably exhaust some people. Most hikers camp at Penyawungan which is about an hour before the summit.

From Loksado, it’s a fun 30 minute ojek ride for 12 kilometres, and passing over several wooden bridges,  to Kadayang, the final village at the foot of the Meratus Mountains. The locals sit out on their wooden porches, preparing kayu manis (cinnamon). The trail begins here (approx 500m above sea level) and follows a river upstream. It is very humid and there isn’t much shade for the first 1.5 to 2 hours. After a kilometre you will reach a hut and after a further 500 metres or so along the trail you will cross over the river (after one hour total). This is the final reliable water source on the hike so stock up here if you need to.

After crossing the river (600m elevation) the trail ascends more steeply to a wooden lookout hut on stilts (775m elevation). This marks the beginning of the forest. There is a nice view to the right from here over to a shapely nearby peak known as Gunung Batudari. You can climb the rotten steps of the hut but take care as it is falling down. After this hut, there is a final hut which is almost completely rotten.

The next landmark is a large rock (900m) which marks the beginning of a rockier section of the trail. Watch out here for leeches and mosquitoes and take care as there are a few places where you could have a nasty fall here. At 1,327m the trail reaches what feels like a ridge. This is a long shoulder of the Meratus Mountains and it continues, rising and falling, up and down, for almost 4 kilometres before the proper ascent up to the peak itself.

The ridge is a long yet pleasant forest stroll and there are some limited views to nearby lesser peaks. All along the ridge are places flat enough to be suitable for camping and you will probably encounter several remnants of campsites made by Banjarmasin students. If you set off early enough, it is definite best to camp at Penyawungan (1,708m) which is the finest flat area on the higher slopes of the long ridge and the last decent camping area before the peak. Wherever you do choose to camp, look out for sun bears – apparently there are one or two still lurking in the Meratus mountains though you don’t need to worry as they don’t pose a serious threat to groups of humans and will most likely try not to be spotted.

From Penyawungan it is less than an hour to the narrow summit which is perhaps one of the best viewpoints in Borneo. Looking northwards you see a series of smaller mountains of the Pegunungan Meratus including the sharp peak immediately to the north of the summit which is known locally as Puncak Kambangan. In particularly fine weather you should be able to see the coastline to the east. Southeast of the peak is another peak in the Meratus chain, hidden behind which is Gunung Kahung many tens of kilometres further south and not able to be seen from here. It’s a truly fabulous panorama of forested mountains and valleys in all directions.

The summit is crowned with a sign erected by Banjarmasin students in 2010. It gives the height as 1,901m which is probably a little optimistic, not that it particularly matters. The peak is also known as ‘Halau-Halau’ and is regarded as haunted by many local Dayaks. Halau means ‘expel’ in Indonesian and apparently the peak has this name in reference to the expulsion of spirits of the dead. Ask your guide for a better explanation!

Return to Loksado the same way. 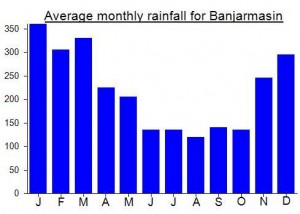